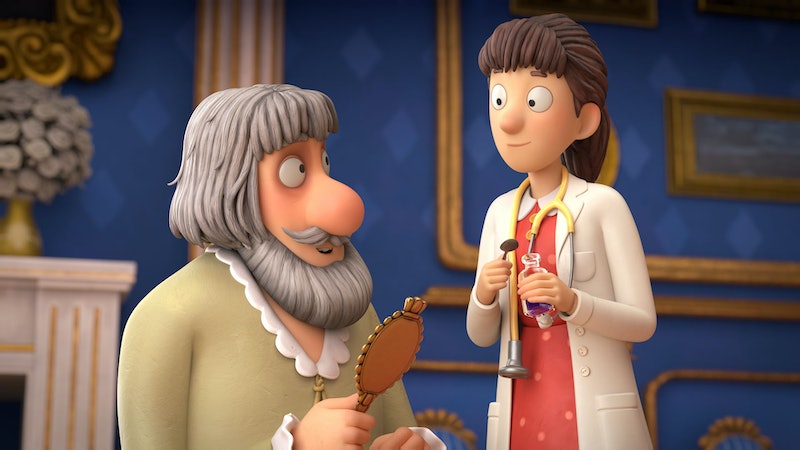 Following up 2018's hit BBC One animation Zog, Princess Pearl, Zog the Dragon, and Sir Gadabout continue on their mission to help mystical creatures from across the land this Christmas. Based on the children's book written by Julia Donaldson and Axel Scheffler, Zog & The Flying Doctors sees Princess Pearl — who prefers to be a doctor than a princess — locked by her uncle the King, who doesn't appreciate her doctor skills. However, turns out, he needs her help after suffering from a mysterious illness. Narrated by Sir Lenny Henry, Zog & The Flying Doctors sees an all-star vocal cast, but who voices the King?

Gavin and Stacey's Rob Brydon has lent his voice to the King in the new film (not that we would have needed help guessing). No stranger to animated films, it's not the first time the Welsh comedian has starred in a Julia Donaldson adaptation. Brydon was the snake in the 2009 film The Gruffalo and the sequel The Gruffalo's Child. Some may also remember the short film, The Stick Man, where Brydon voiced numerous roles including Cat, Snail, Frog, and Park Keeper.

In Zog & The Flying Doctors, we'll see the flying doctor trio try to free Princess Pearl from the stubborn King. Although, while Pearl gets a chance to escape, she decides to stay and care for the ill King, but will he trust her healing powers and give her back her freedom?

Filled with mermaids, unicorns and a sneezy lion, the 30-minute short film looks set to be a perfect festive heartwarmer on Christmas Day.

Zog And The Flying Doctors airs on BBC One, Christmas Day at 2:35pm