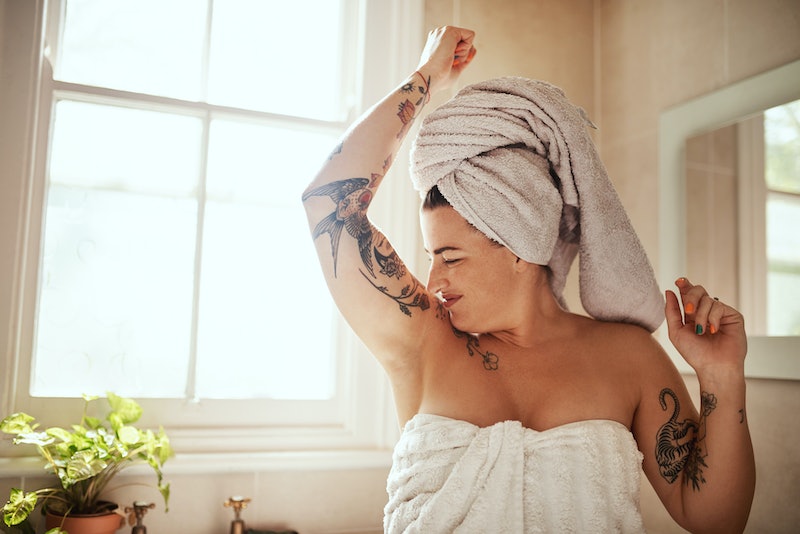 If you wake up with extra bad breath, have smelly armpits after a workout, or positively need a shower after a long day, consider yourself in good company. Some level of general smelliness is to be expected as a human being, and can usually be cleared up with a swipe of a toothbrush or slick of deodorant. But did you know a sudden increase in body odor, or any smell that seems “off,” may point to an underlying health problem?

As Dr. Jaydeep Tripathy, a primary care doctor at Doctor Spring says, there are a few tell-tale signs that your body odor may be a side effect and that it may be time to check in with your physician. “Notice if you sweat or smell even with a lack of activity, if there are other symptoms, or if the odor is new or worsening as these may be caused by more than just sweating,” he tells Bustle.

Keep an eye (or a nose) out for a sour body odor or sweat that smells like bread dough, however strange that may seem. And while you’re at it, check in on non-sweat-related odors, too. Some smells emanating from your mouth, scalp, feet, or vaginal area could point to an infection, hormonal imbalance, or other underlying condition that you’ll want to get treated ASAP.

Feeling like you stink more than you should? Read on below for a list of various odors that may be a sign of a health problem.

It’s one thing to have bad breath in the morning, but something else entirely to have sweet or fruity breath for no reason. In fact, if you notice it or someone else points it out, head on over to your doctor or the ER.

"It may be indicative of diabetic ketoacidosis (DKA), a metabolic condition that has the potential to be deadly and may arise as a complication of uncontrolled diabetes,” Nesochi Okeke-Igbokwe, MD, an attending physician at NYU Langone Medical Center, tells Bustle.

This particular odor is a result of the body breaking down fatty acids, which leads to an increase in ketones, “specifically acetone which can give rise to a distinct odor,” adds Dr. Marisa Garshick, MD, a board-certified dermatologist. “It can be considered a serious medical condition.”

2. Bad Breath That Doesn’t Go Away

Ever brush your teeth, floss, rinse, and still have bad breath? If so, you might have halitosis. “This general term used for bad breath can have multiple causes such as poor dental hygiene,” Tripathy says, as well as more serious concerns.

One is periodontitis, also known as gum disease, which is a serious infection in the mouth that can lead to tooth loss. “The odor could also be caused by an underlying medical condition like [...] acid reflux,” Tripathy says.

Acid reflux occurs when the contents of your stomach travel up into your throat and mouth. It can make your breath smell sour or even like poop (yes, poop) due to the acid. Not only is it unpleasant, it’s also a condition that can cause damage to your esophagus over time.

While odor in your vaginal area is common, you may want to see a doctor if the scent becomes stronger or if it could be described as "fishy,” as it may point to a sexually transmitted infection (STI) or other infection.

"A 'fishy' odor coming from the vagina can be a sign of bacterial vaginosis (BV)," Caroline Mitchell, MD, MPH, a faculty member in the Vincent Center for Reproductive Biology at Massachusetts General Hospital, tells Bustle. "BV is a change in the vaginal bacterial community that can lead to increased discharge and odor, especially after sex."

Since this particular infection can lead to other gynecological health issues, it's important to treat it as soon as possible. Typically, that will involve a course of antibiotics.

4. Bad Breath After You've Been Sick

If you have bad breath after a cold, you might be able to chalk it up to leftover post-nasal drip. That said, "chronic bad breath can also be a sign of overgrowth of bacteria in the gums, and even an acute or chronic sinus infection," Dr. Jennifer Stagg, a practicing naturopathic physician, tells Bustle.

It's not uncommon for head colds to turn into something more. So if you were sick recently, and have had smelly breath ever since, it could be a sign an infection is lingering on.

5. Foot Odor Even After You Shower

Just like any other area of your body, you might notice that your feet give off a slight funkiness after a long day. It could be chalked up to dirty socks, which cling to odor, or a build-up of sweat. But if you take a shower, wash your feet, and still notice a stench, it may mean you have Athlete’s foot.

Robinson says other symptoms of Athlete’s foot include redness on your feet, blisters, and scaly skin. The red areas will likely be super itchy as well, especially when you first take off your socks and shoes.

While anyone can get sweaty during a stressful moment, excessive sweating is particularly common for people who have an anxiety disorder. It can leave you coated in a layer of extra pungent "stress sweat,” particularly in your armpits and groin area.

This type of sweat comes out of entirely different glands than regular sweat and often gives off a stronger odor. If you think anxiety may be the source, speak with a therapist to learn ways to rein in stress and calm your nerves.

There's a difference between normal body odor and odor that might be a sign of a skin disease — and again, it’s usually the strength of the smell. That’s why anything on your skin that could be described as “pungent” can be cause for concern.

For example, certain skin infections "can present with a putrid odor from the byproducts of bacterial growth," Stagg says. "Gangrene, which is dying tissue, has one of the most offensive odors and smells like rotting meat."

Other skin infections to watch out for can include staph infections and fungal infections, which will need to be treated by a doctor.

8. Body Odor Due To Hyperthyroidism

Hormonal imbalances are another condition that typically cause excessive sweating which, in turn, can up your stinkiness levels. As Tripathy says, thyroid problems — such as hyperthyroidism — can make you sweat even when you aren’t active.

Other symptoms of hyperthyroidism include nervousness, brittle hair, changes in bowel patterns, a puffy face, rapid heart rate, and fatigue.

Any new or worsening odor will be caused by the excessive sweat. As Stagg says, it’s because the extra moisture on your skin mixes with your natural bacteria and increases the chance of developing body odor.

“When these organs don’t function properly,” Tripathy adds, “the toxins build up in the digestive tract and the bloodstream. This causes sweat to smell like ammonia.”

10. A Unique Scent Linked To Melanoma

While this isn’t something you’d be able to detect on your own, research from the Monell Chemical Senses Center in 2013 showed that there may be a unique scent associated with melanoma and other skin cancer cells. “The researchers found that a nanotechnology-based sensor could differentiate melanoma cells from healthy skin cells,” Robinson says. “The scent is detected by an ‘electronic nose’ and is not detectable to humans.”

It’s why it’s suspected that dogs have long been able to “sniff out” cancers, she adds, due to the scent that tumors give off. While you won’t notice it on your own, you can let your dermatologist know about new or changing spots on your skin and go for full skin exams once a year.

If you have a condition called hyperhidrosis, which causes excessive sweating, you’re more likely to develop bromhidrosis, which is the “result of the breakdown of sweat by bacteria and yeasts that normally live on the skin and can be triggered by foods and medications,” Robinson says. “The odor here is BO at maximum volume.”

Pungent foods like garlic or oregano might contribute to the odor or shine through, Robinson says, but the smell has also been described as rancid or “sour and sweet.” As for the aforementioned “bread dough” smell? Tripathy says it could be due to a vaginal yeast infection or even a yeast infection in your armpits.

“A general rule of thumb in all fields of medicine is to pay attention to changes in your body,” Robinson says. “They almost always are telling you something [so] notice the change, pay attention to triggers and symptoms, and discuss them with your doctor.”

This article was originally published on July 26, 2017