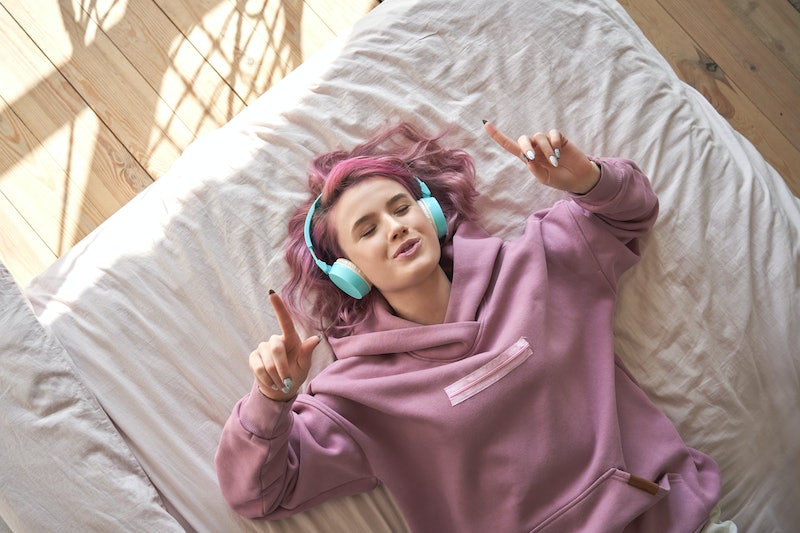 Until teleportation becomes a thing, I’m fairly certain that no technological advancement will be able shock me. But until then, we can get lots of enjoyment from all the things technology has to offer that just makes life a little bit easier. One such device in that fits the bill is the Amazon Echo, a device that allows you to make efficiencies through verbal commands. What this also allows you to do is use Alexa to play Amazon music stations and playlists, which basically makes the rigmarole of deciding what to play when you have friends over a whole lot easier. What’s not to love?

So, first things first, let’s get into some basics about Alexa. For the unacquainted, it’s a “cloud-based voice service” which allows you to do things like control your room's temperature, turn the lights on and off, and operate all sorts of other switches. All you have to do is tell them! (As the NYTimes reports, while Alexa is “sold with a default female-sounding voice and has a female-sounding name,” if you ask them about their gender they will say “I’m not a woman or a man, I’m an AI.”) If you use Alexa on your Amazon Echo, you’ll be able to access immersive, 360º omnidirectional audio — not too shabby! — but the best part is arguably that Amazon has provided us with countless Alexa music stations brimming with catchy tunes by your favorite artists. To play any of these, simply say, "Alexa, play [name of playlist]” and you're all set. Read on to discover the best playlists and stations to stream now.

Maybe you’re finally making time to read all those books on your bucket list that you have accumulated throughout the last year. In this case, the soothing tones of the Classical for Reading Alexa playlist could be right up your alley. This music ranges from orchestral symphonies to guitar quartets, and includes composers like Handel, Bach, and Debussy. Also, if you’re worried that music might be a distraction in this scenario, rest assured that a 2007 study at Stanford University found that listening to classical music makes your brain spongier. In essence, you become better at absorbing and understanding new information. Win win.

2. For Someone Who Needs To Unwind

There are many people who love white noise due to the fact that they cannot fall asleep when there are no sounds around them. The Nature Sounds For Sleep Alexa playlist will solve that issue for you. If you’re on the fence about Nature Sounds versus other type of audio stimulation, a 2017 study out of the UK using fMRI image scanning found that listening to “artificial sounds” pushes your attention inward, a process which has been linked to stress. By contrast, Nature sounds — things like sounds of the ocean, rain, streams, babbling brooks, and much more — push your attention outwards, allowing for a more peaceful experience. You’re welcome.

3. For Someone Feeling Nostalgic

If you're having trouble remembering the name of that one song from a few years ago that’s just on the tip of your tongue — was it Taylor Swift? It was probably Taylor Swift — then this Alexa playlist of the top 50 Great Songs from the Last 10 Years will really help you out. It’s pretty heavy on the pop music — think Dua Lipa and Ed Sheeran — but you’ll also find voices like Kendrick Lamar and Avicii too.

4. For Someone Seeking Inspiration

What can possibly pump you up harder for the day quite like '80s rock anthems? Nothing. I've tried it all and this Hair Metal Anthems playlist is the most effective BY FAR. According to AllMusic.com, glam metal, or hair metal, is a sub-genre of heavy metal from the late '80s that's more pop-centric. Hair metal bands usually wore lots of makeup and flashy outfits. If you're still not familiar, think of bands like Mötley Crüe and Van Halen.

5. For Someone Working Out

Speaking of getting pumped up, nothing is worse than reaching mid-workout and feeling like you want to give up. These magnificent Hip-Hop Workout jams will help to get you motivated and before you know it you’ll be piling through those stomach crunches to the sweet sounds of Migos and Drake.

6. If You Want Your Partner To Know It's On Tonight

Date night is going to get sexier with this ’90s R&B For Date Night Alexa Playlist. . To give you an idea, this playlist includes artists include Usher, Ginuwine, Maxwell, Aaliyah, TLC, Lauryn Hill, Brandy, Boyz II Men, and Mary J. Blige. Even better, you remember how the music from the ‘90s had that distinctive feel that just makes your shoulders drop? Well, pour yourself a drink, get this Amazon music station on, and get ready to get it on.

Okay, maybe this isn’t totally realistic all of the time, but hey, we can imagine we are right? Hair blowing in the wind, top down, hands in the air, your friends in the backseat... it sounds like heaven. If you’re lucky enough to find yourself on the road, or perhaps even just want to pretend, the playlist is key to taking things to the next level, and nothing can beat screaming with your friends to the songs on this Pop To Make You Feel Better Alexa playlist. It’s “feel good” heaven.

8. For The Baby Sitter

Parents or substitute parents don't want you to play songs with graphic content or language, and that's completely understandable when you have kids running around the house. So what's more PG than this Kidz Bop playlist? Nothing. The answer is nothing. Your kid, and maybe you, will enjoy countless hours of remastered songs like “Shake It Off”, “Hey Ya!”, “The Middle”, and “Single Ladies”. Plus, get the kids involved in a dance party and they’ll head off to sleep faster than ever.

9. For Someone In Their Feelings

You know that feeling: you’re totally vibing with your emotions and you need that perfect song to complete your feels, and maybe even push out a little tear. Adele could make a mountain cry with her powerful voice., and whenever I need a good emotional cry, I play this Alexa playlist called The Best Of Adele. It’ll get you to the best place you can be in no time.

The work of finding the perfect Alexa party playlist has already been done for you. You can just play this 50 Great Pop Songs of the 2000s playlist and your guests will know the words to just about every single song. So sing your heart out to jams like Kelly Clarkson's "Since U Been Gone," Gnarls Barkley's "Crazy," Backstreet Boys' "I Want It That Way," and, of course, Shakira's "Hips Don't Lie." And if you're feeling extra millennial, you can check out some Amazon products that are super popular among people that grew up during the 2000s.

11. For The Music Festival Fan

Festival tickets can be super expensive. According to Money.com, the price of tickets at Coachella ranged anywhere from about $430 to $1,000 when Beyoncé performed in 2018. I mean, is it hard to believe? Not for Queen Bey. But, if you can't afford them this year, or your favorite festival is not happening, that's totally okay because Alexa has a Long Weekend: EDM Alexa playlist that will put you in the mood without you getting sunburned and dehydrated.

12. For The Alternative Music Fan

Alternative music is a bit of a tricky one. It started out as a term used to describe rock music that wasn’t typically commercial, but then it became very popular and not so... alternative. On this playlist of The 50 Great 2000s Alternative Songs you’ll find some serious bangers that will get you through the day, especially if you're counting down the days until the weekend. Think Fall Out Boy and Kings of Leon.

13. If You Need A Break From Technology

Sometimes you just want to focus on the simple things in life such as folk music or being alone in nature. You can do that with the Ease Into Morning: Folk Alexa playlist on the Amazon music station. While this playlist is technically meant for mornings, we think you’ll enjoy it just as much with a glass of vino in a rocking chair, or if you venture out on a hike instead of scrolling through Instagram.

Country music should be a lot more popular than it is, in my opinion. It's got great musical accompaniment and lyrics, plus it tells a story, and that’s one of the reasons many people appreciate it so much. In fact, during 2020, TIME reports that country music streaming grew by 15.8%, and perhaps some of them were listening to the 50 Great Classic Country Songs Alexa playlist. If you’re in the city, like me then perhaps it’ll give you a chance to imagine that you don't live in an asphalt jungle with honking cars 24/7.

If you are on a quest to be the chillest person ever, the Cozy, Calm Afternoon playlist will earn you that title. The description for this Amazon Alexa playlist reads, "Keep it mellow while allowing the creative juices to flow," and it's pretty accurate. In fact, I’m writing this article on a hammock, listening to this Alexa playlist right now, if you wondered where the inspiration came from.

16. For The Successful Cook

I air-guitar as a rule. It happens whenever I successfully accomplish a goal and I truly feel like the 50 Great Guitar Solos playlist has some of the best tunes to practice the craft to. You know, like when you have so much time at home that you can actually dabble with that Pinterest recipe you have been wanting to cook and own it?! Yes, it is in fact possible to get a Pinterest recipe right (at least a few!).

17. For A Boozy Summer Night

The weather is heating up and there’s nothing better than a summer grill out accompanied by a few of your friends and your favorite libations. Heat up the grill, throw on the Grill and Chill Alexa playlist, grab your favorite hard seltzer, and relax to the sound of Tom Petty’s angelic voice.

The sun is shining, the birds are chirping, and you have a smile on your face that just can’t escape. You know what that calls for — a few good happy songs. This Feeling Happy Amazon music station will complete the feels and you’ll be on top of the world.

Maybe you love working from home, maybe you don’t, but either way you might need some extra entertainment when you’re stuck in your apartment alone. This Morning Cup of Coffee Alexa playlist is designed to get you up and moving, and we think it’ll do the job. Some of the feel good bangers on this particular list include Dusty Springfield “Son of a Preacher Man” and Amy Winehouse’s “Back to Black.”

There’s nothing better than busting out the microphone after a few drinks and singing at the top of your lungs with your friends. However, picking the song is half the challenge when it comes to nailing that karaoke performance. Luckily for us, Amazon has taken the hard work out of that decision-making with the Karaoke Night Alexa playlist. There’s Madonna (“Material Girl”), Journey (“Don’t Stop Believin’”) and — of course — Beyonce (“Single Ladies”).

Commuting, remember that? Many people are back on the grind going in and out of the office. Make your drive or tube ride all the more enjoyable with this New Music Commute Alexa playlist that will have you singing your heart out at 7 in the morning. It’ll give you the perfect “did you hear that new Billie Eilish...” opener when you find yourself waiting for the coffee machine.

This article was originally published on Sep. 1, 2016