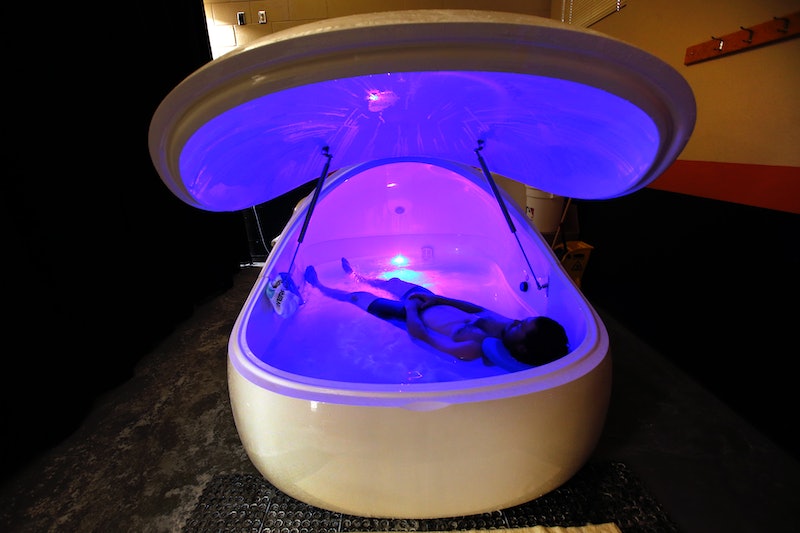 When I heard about floating at a party, I thought, Now that sounds like something we need. A guy was telling me and my partner Jacob* about Lift Next Level Floats, a place in Brooklyn where, for $79, you can go and float in what is essentially a saltwater sensory deprivation tank for an hour. Set to "skin temperature," the baths are filled with 1000 pounds of epsom salt, allowing your body to float in total silence and darkness. Floating is also known as "R.E.S.T.", or Restricted Environmental Stimulation Therapy, and the effect is supposed to be incredibly relaxing. Life-changing, even.

"Giving your body a break from gravity's hold can be transforming. The stimulation of no stimulation allows usually otherwise occupied parts of your mind and body to completely focus elsewhere," Lift's website states.

Gravity has been oppressing me for 28 years and counting, so I called Float, and proposed a very experimental kind of media review: allowing Jacob and me to float once a week for a month to see if the supposed perks had any impact on our relationship. Lift agreed, and though I hadn't been aiming to float in the same tank as him, when I perused their Commonly Asked Questions section, I noticed that I wasn't the first person to consider whether the therapeutic benefits of floating might extend to ones relationship.

Considering I was having some major difficulty adjusting to Jacob going out with someone else for the first time in our non-monogamous relationship, I was willing to try anything to feel better. Would floating help me be less jealous, and uncover a chiller version of both of us?

Just so you know, that's what Jacob's RBF condition looks like. Part of the problem is that he finds living in New York City to be very stressful. The constant noise and crowds get to him more than most people, so I was particularly excited to see what total sensory deprivation would do for him.

He went to float first, and I chatted him afterwards immediately, wanting to know how it went.

Not only was he super-relaxed and happy, but he was even dreaming about my go-to escape fantasy! When I came home that night, he was extra chill and amorous, and I was thrilled.

My appointment to float was later that week — but on the lovely summer evening I was supposed to go, a new guy I was hanging out with (again, we're in an ethically non-monogamous relationship where we're allowed to more casually date other people) invited me to the Brooklyn Botanic Garden. I told him I'd just stop by for an hour, but when we ended up finding a hidden grassy spot and staying past closing, I felt only a little guilty calling Lift to reschedule. What did it say about me and my commitment to my relationship that I was already blowing off this experiment in favor of another dude?

I decided not to assign too much symbolism to it, and reasoned that, for me, getting to steal a moment of peace in nature with no one else around was basically the same as floating.

By Week 2, I was ready for my first float. Again, Jacob had his session earlier in the week, and I was excited for him to come home and, presumably, propose or tell me he'd bought a house in the country with our imaginary trust fund. "How was floating?" I asked him over dinner. "Meh," he shrugged. "It was nice, but no major revelations this time." He explained that maybe he had been in such a raw state the first time because I had just started going out with this new guy. Now, presumably, he was used to it. How nice for him.

When I went for my appointment later that week at Lift, I was led to a really nice, clean little room with a shower and floating tank. They gave me earplugs and vaseline for any cuts, and reminded me not to rub my eyes. I was kind of nervous that floating would hurt my vagina (I had traumatic memories from the Dead Sea in Israel), but when I got in I was pleased to find that the sensation was quite pleasurable. The tank wasn't deep, and was only wide enough for me to fully stretch my arms out. But without any light, I might as well have been floating in a vast ocean. Though the water was set to most people's resting skin temperature (like a lukewarm bath), I found I was a little cold, since that's how I run. Realizing I couldn't really warm myself up, I laced my hands behind my head and tried to focus on my breathing.

Unsurprisingly, without any noise or visuals to distract me, I found it much easier to try to meditate, just listening to my breath. I waited for profound revelations about my relationship to come, but found my mind mostly just kept wandering back to guilt over not having called my mom and wondering what was for dinner — the usual. Still, by the time the hour was up I felt deeply relaxed, like I'd both gotten a massage, napped, and meditated for an hour. Stepping back out into the streets of Brooklyn was loud and uncivilized, but I felt a newfound sense of calm about it.

On my way home, I actually ran into the guy I had just started hanging out with on the street. I gave him a hug, but told him I had to get home; I was eager to get back to Jacob. We spent the night cuddling on the couch, and when he jokingly called me his Wifey, I held him tighter.

Jacob had an appointment to float in the afternoon — and a date with the woman he'd just started seeing that same night. They'd only been out on a couple of relatively innocent dates, but I was already wildly jealous. Though we've been non-monogamous since the beginning, this was the first person he'd actually liked enough to go out with since we started dating. In the days leading up to their date, I found myself obsessing about all kinds of small details — including the fact that he'd be taking all his relaxed, romantic post-floating-energy over to someone else. In my jealous fugue, it seemed to somehow cheapen the sentiments he'd expressed to me after his first float.

When I asked him over chat how his third floating session was, he gave a similar answer to the week before: it was nice, but no major revelations. He went out on his date that night, and though I tried to see the new guy to distract myself, it didn't work. Suddenly, kissing someone else just felt like adding more unnecessary noise and light, and I started to wonder if I'd just be happier having Jacob all alone to myself in the country. I excused myself from the date before Jacob was even home, and felt my pulse rise as I waited for him, staring at the clock.

When it came time for my float later that week, I was exhausted. I'd been tormented by the most jealous feelings of my life, and I was scared that floating would prove to be almost overwhelmingly emotional for me. I called ahead to ask them to make my tank extra-warm so that I'd at least feel extra-comfortable.

As I climbed into the tank and turned off the lights, I felt my tense muscles almost immediately relax and my mind mostly empty. It was warm, and I could almost believe I was indeed weightless. I tried to focus on the jealous feelings and breathe into them. At moments, my body felt flooded by anger and sadness; imagining them kissing and cuddling on her couch, him stroking the head he had told me was also small. But as soon as I felt the sensations, they seemed to slip away like water through fingers. By the time it was over, I felt quiet and calm, raw.

When I came home, we had some of the most intense sex we've probably ever had. I was silent the whole time, focused only on my breath and the feelings running through my body. I cried quietly at points, but I wasn't sad, exactly. It was more like I felt overwhelmed by my desire to possess someone I was realizing I never fully could. Like I was grieving the fact that no one can really possess anyone, maybe not even themselves. Jacob held me for a long time, but when I put my eye mask on to sleep, he protested.

"I hate how you disappear behind that thing. It makes me feel so far away from you."

"That's how I feel all the time with you." My spite was so reflexive it felt like having a joint knocked. It wasn't even true. I just felt angry; angry at myself that I was angry in the first place, and angry at him for needing the same freedom I need sometimes. I took off my mask, and put my forehead to his. We fell asleep and stayed that way all night, like we wanted to read each other's dreams.

During Week 4, I broke my foot rushing down the subway stairs after Jacob. He floated for the fourth time, and said the same thing he had the two weeks before; that it was nice, that he was able to meditate a bit, that it felt relaxing, if a bit cold. No more major revelations about our imaginary country home.

I couldn't float with a broken foot, or if I could have, I found I didn't want to. When Jacob went on another date, I tried not to take it as an affront or betrayal; he had been taking care of me all week. Knowing I wouldn't be going out, I invited my best friend over. We talked and watched Grace and Frankie , but eventually it was late, and I was faced only with myself. I'd like to tell you that I learned to sit alone in silence with my uncomfortable feelings that night, but the truth is, I needed all the sensory distractions I could get. Still, something had definitely shifted. I wasn't sinking.

When Jacob came home earlier than I expected, I smiled at him, and he smiled back with relief. I'd turned some sort of corner, and though in the weeks to come I knew I'd surely feel like I was drowning again, when I heard him turn that lock, I was floating.