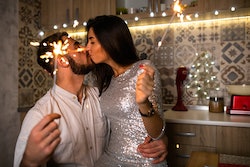 We look at the new year as a chance to start with a clean slate and we sure do need it after the ride that has been 2020. The last thing we want to do is get off on the wrong foot for 2021. New Year's Eve superstitions are abundant — have you brushed up on all the rules we have to follow so that 2021 doesn't turn out to be a giant heap of misery?

Let's all just simmer down for a second, though, because they're called "superstitions" for a reason. Dictionary.com defines the word superstition as "any blindly accepted belief or notion," and an "irrational fear of what is unknown or mysterious." In other words, we don't believe in superstitions because science or fact has told us to. According to psychology, there are a number of reasons we believe in superstition. One is that we feel the need to fill in the gaps and explain everything. You might be having an awful week when you remember something bad you did last week and still feel guilty about. You thus conclude that you're "paying for" your poor choice. Another reason we believe in superstition can be chalked up to the false cause bias, which says that when things happen in succession, we automatically attribute a cause-effect scenario.

I think that deep down, we all know superstitions don't run our lives. But if you want to be extra careful this New Year's Eve, here are 13 of the most common superstitions.

1. Kissing Some At Midnight

This might be the most well-known New Year's Eve superstition. While the precise details vary, the general superstition is that if you don't get kissed at midnight, you will be unlucky in love the following year. Pure silliness. We all know that your love life is determined by your horoscope. #Duh.

3. Make Sure Your Cupboards Aren't Bare

Heading into the new year with naked cupboards could bring you a year of scarcity. Time to go shopping!

4. Don't Take Anything Out Of Your Home

Removing things from your home — like trash or anything you're donating — could mean that you lose things throughout the next year. Do it either before New Year's Eve or starting Jan. 2. And on a similar note...

I'm totally OK with this superstition, which claims that doing things like sweeping will "sweep away" your good fortune for the coming year.

6. Open All The Doors Before Midnight

Just before midnight, that is. This one is meant to let the old year out and welcome the new year in. It'll also come in handy if you haven't taken the trash out or done any cleaning and your home smells like rotten bananas.

One for each month of the new year, to bring you good luck. Or just because you really like grapes.

8. Don't Loan Out Any Money

Similarly, don't pay back any loans. This might make for a year of paying. Keep your wallets packed to bring good luck with money.

Even if you just have something in your eye, keep it together, or you could be looking at a year of sadness.

These vary by region and culture. In Greece, it's Vassilopitta. In Italy, it's pork sausage over lentils. In the southern United States, it's cornbread. I'll take all three, please and thank you.

11. Put Cash In Your Wallet

Putting cash in your wallet before the clock strikes midnight has said to bring prosperity and wealth in the new year.

Rumor has it that eating any animal that naturally walks backward means you'll be in for an uneventful year where your goals can regress. Best to stick with the black-eyed peas and collard greens.

13. Carry An Empty Suitcase Around

Okay, hear me out. We all have had a case of wanderlust this year since we can't go anywhere. This New Year's superstition encourages you to take an empty suitcase around your block in order to welcome in a year of travel and adventure.

This article was originally published on Dec. 26, 2016