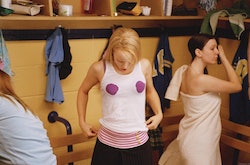 I am the first to admit that I can be a procrastinator, even with things I enjoy — like picking out a Halloween costume. In August, you have all these ideas, but by the end of October, you haven’t even thought about going to the Halloween store. So if you’ve put off your costume selection until the last minute, here are some creative last minute Halloween costume ideas that you can probably pull from your closet of things you already own.

It's not that I procrastinate Halloween costumes because I don't have any ideas. In fact, usually the opposite is true. I have too many ideas, and not enough time or money to actually turn them into real costumes. Luckily, you can still put together some awesome and unique Halloween costumes the week, the day, or even the night before Halloween — I promise. The ideas I’ve put together either contain a lot of things you might already own (I think every woman owns at least one pair of flats or a black shirt), or items that can easily be bought on Amazon or at the mall. Ready for your costume to be a hit? Here is everything you need.

This costume is just that — basic. All you need is a witchy black dress, a witch's hat, your favorite pair of cozy boots, your phone, and, of course, your fave drink. Don't forget to Snapchat all your spell casting!

Costume: I choose you! Get yourself a short-sleeved blue hoodie, a pair of light-wash jeans, some cheap green mittens, Ash Ketchum's signature hat, as well as a few Pokémon accessories — a Pikachu plush and a Pokéball.

In times like these, Daria Morgendorffer from the MTV series Daria is pretty much the best role model any of us can have. Aspire to be more like the iconic (she would hate being called iconic) '90s misanthropic teen by emulating her look, and pulling out this simple ensemble you probably already own.

Raise your hand if you've ever felt personally victimized by Regina George. You probably can't, because she's not a real person, and is instead a character from Mean Girls... but you can dress up as her for Halloween. Take on her most memorable look, which came about as a result of one of Janis Ian's many attempts to sabotage Regina's reputation: Janis cut two holes over the chest area of Regina's tank top in an effort to embarrass her, but only ended up creating a trend when Regina rocked the ruined tank top. Buy a cheap white tank top yourself, cut two holes in it, wear a bright purple t-shirt bra underneath, and rock the look.

5. A Minion From Minions

Beedo, beedo, beedo! To dress up as a minion from Minions, it's simple: Nab a yellow hoodie, overalls, some black tights, and you're good to go.

It's a bird! It's a plane! No, it's your Halloween costume! Obviously, you'll need a Superman shirt, but the only other components will be a white button-down and slacks.

Get it? Party like it's 1999 with a leopard print dress, cat ears headband, heels, and a party hat to complete the punny look.

If all else fails, you can always be a sheet ghost.

More like this
12 Aphrodisiac Desserts To Spice Up Your Valentine’s Day
By Kaitlyn Wylde
8 Things You Can Do To Appreciate Lunar New Year
By Elizabeth Tsung
19 Instagram Captions For Celebrating Black History Month
By Ayana Lage
15 Black-Owned Liquor & Wine Brands To Add To Your Bar Cart
By Alexis Morillo
Get Even More From Bustle — Sign Up For The Newsletter
From hair trends to relationship advice, our daily newsletter has everything you need to sound like a person who’s on TikTok, even if you aren’t.

This article was originally published on Oct. 15, 2015