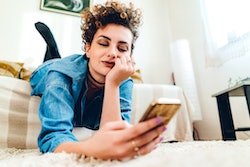 I developed a love for erotica during high school summer vacations, when I'd sneak down to the store by my family's beach house to get Cosmo, hoping nobody caught on that I was really just reading it for the "red-hot reads." When I got my own computer for college, it occurred to me that I didn't need to be sneaky anymore: I could search for red-hot reads online. Then, I realized that was just a tiny portion of the sexy stories available on the internet (not to mention a pretty narrow representation of human sexual desire, but that's another conversation).

After many a Google search ranging from "erotica for women" to "exhibitionist fantasies" to "embarrassing orgasms" (don't ask why it's just a thing I'm into lately), let's just say my summer reading list has become more varied than women having intercourse with muscular men on beaches. Here are a few sites to keep you occupied on hot summer nights... or heat up your nights any time of year.

This article was originally published on June 28, 2017