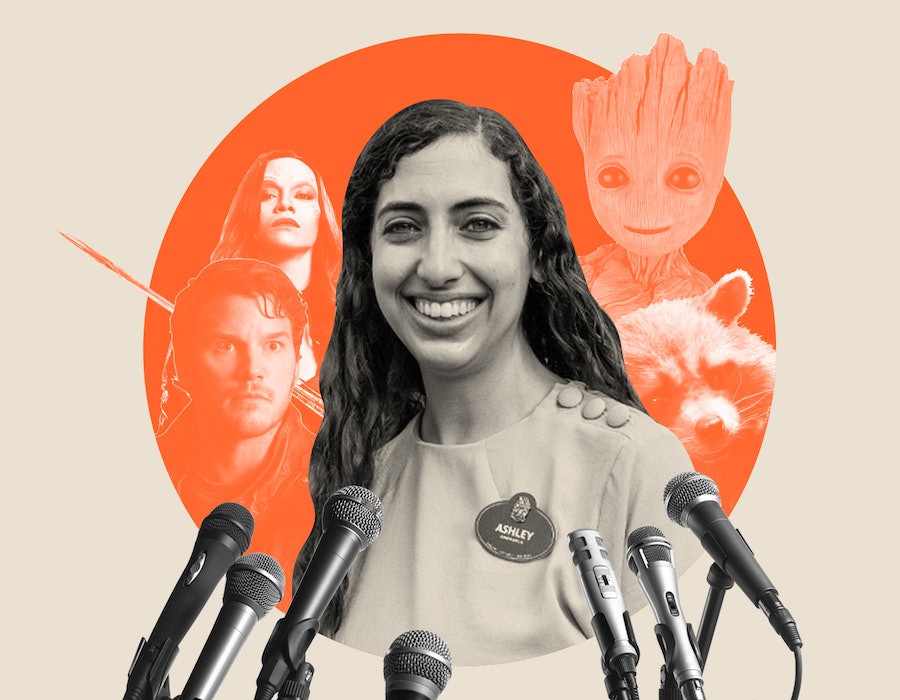 In Bustle’s Quick Question, we ask women leaders all about advice — from the best guidance they’ve ever gotten to what they’re still figuring out. Here, Ashley Levine reveals what it’s really like working where dreams come true.

For any self-confessed Disney Adult, working for The Mouse topped the list of Childhood Dream Jobs. Growing up in South Florida, Walt Disney Imagineering’s Ashley Levine was no exception. She spent summers visiting the Orlando parks with her family and wrote college entrance essays about her plans to one day work for the Walt Disney Company (“​​I got the occasional eye roll here and there”). After completing her degree in civil engineering at Nashville’s Vanderbilt University in 2011, Levine joined Walt Disney Imagineering as an intern — and she’s been there ever since.

Eleven years later, Levine, who has the peer-nominated Walt Disney Legacy Award under her belt, is preparing for the launch of one of Walt Disney World’s most ambitious projects to date. Guardians of the Galaxy: Cosmic Rewind, pegged for a Memorial Day Weekend opening, is the Orlando destination’s first-ever backward launching coaster, as well as its first major attraction to bring the Marvel Cinematic Universe to Disney’s Florida parks.

On the ride, guests board “Starjumpers” alongside Star-Lord, Groot, and Rocket in a race to save EPCOT (and the galaxy) from a mysterious force (enter: celestial villain Eson) causing humans and objects to “[zip] backward out of existence.” Based in the park’s new Wonders Of Xandar pavilion, Cosmic Rewind is just the beginning of the fun for fans of the MCU’s shows, movies, and comics. Visitors will also have the opportunity to enter the “Galaxarium” and the Treasures Of Xandar store.

As the attraction’s project controls estimator, Levine worked with all 160 disciplines across Walt Disney Imagineering — from construction managers to special effects illusionists — to ensure both the creative and technical aspects involved in executing a ride of this scale were working in harmony to make their Guardians vision a reality. “I've had to make sure that the team has the resources they need to execute that creative vision that we had many years ago… Anything that you see, there's a little bit of me in all of that.”

Below, Levine looks back on her journey at Walt Disney Imagineering, shares the career advice she’ll never forget, and reveals her favorite Hidden Mickey.

Every day is a little bit different. I spend about half of my time working at my desk and going through spreadsheets, analyses, and drawings. Then the other half of my day, I spend working and collaborating with our teams. My position is somewhat unique in that I actually get to interact with all of the disciplines within Imagineering to try to make sure everybody is able to do what they need to do. But I will say every day starts with a cup of coffee, that’s the one constant.

What is the best and worst career advice you have ever received?

I was once given advice that really stuck with me. I was told to find something you love doing [so much] that you would do it for free, but you’re able to learn and earn the skills to do it well enough that they pay you to do it. And worst advice, I have been told to “be the best.” I think a little tweak to it — “be your best” — is much better advice. I find that being “the best” fosters this competitive environment, and really we need to be supportive and empowering of the people around us.

What has been your biggest “pinch me” moment while working at the Walt Disney Company?

Most recently, I would say the first time that I got to ride Guardians of the Galaxy: Cosmic Rewind. The moment that I got to ride that, I will say, I don't know if it was like being on a roller coaster and moving so fast, or the emotion of all the work, sweat, and tears that went into it… But there were a couple of tears shed as I was getting off of the coaster. When you see guests get to enjoy something that you've spent years working on, I can't even explain the pride and the feelings that you get. It's so rewarding.

Which part of Guardians Of The Galaxy: Cosmic Rewind do you think Marvel fans are going to freak out about most?

I would say that your journey will start the moment that you enter the Wonders of Xandar Pavilion. And I think guests will be really surprised by all the details that went into it, not just the physical ride itself, but what leads you there. Our team has worked really closely with our studio partners to just really make sure that we are authentic to the story and the characters, and we are really delivering to our guests an experience that matches the energy that the Guardians bring.

Which Walt Disney World attraction do you wish you could have worked on?

Part of me wants to say Soarin', only because I remember seeing the ride engineers at the time using the erector set to simulate how the ride system works. To me, that was just always super fascinating. So, to be able to have worked on something like that, I think would've been really, really cool. And Epcot's my favorite park, so I would've been on cloud nine.

What is your favorite Hidden Mickey in all World Disney World, and why?

The one that comes top of mind is the very large Hidden Mickey that you can only see from a map at Hollywood Studios. I thought it was so clever that it's not just an individual Mickey, you can't just see it by enjoying the park. You have to look at a map to see it, and I think that's really awesome that we did something like that.

More like this
The 'Ms. Marvel' Review Bombing Controversy, Explained
By Radhika Menon
Chris Hemsworth Joked That Baring His Butt In ‘Thor: Love And Thunder’ Was A “Dream”
By Brad Witter
All The Marvel Easter Eggs You May Have Missed In ‘Ms. Marvel’ So Far
By Kadin Burnett
What Is A “Softboy?” The TikTok Term & Aesthetic, Explained
By Courtney Young
Get Even More From Bustle — Sign Up For The Newsletter