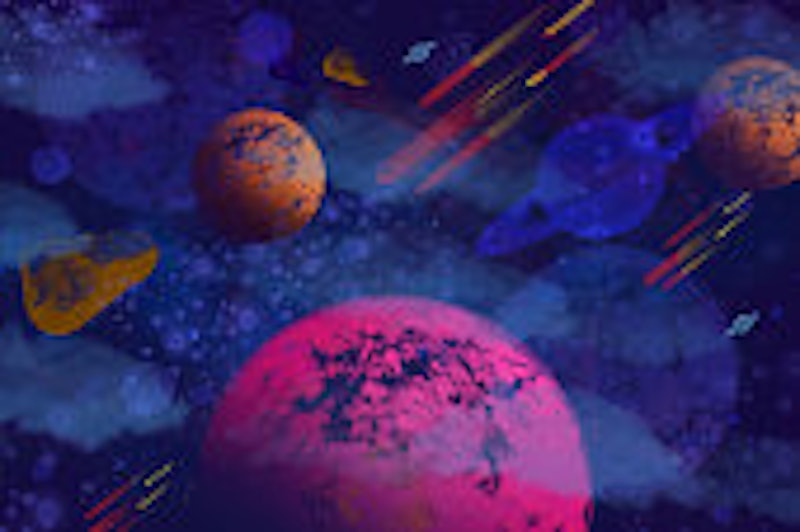 You're probably familiar with the major planets in astrology. After all, their archetypes, relationships with one another, and movements through the zodiac are what the study of astrology is all about. But there are additional celestial bodies that can be considered when reading your own birth chart or learning more about the cosmos, and those are the asteroids in astrology. There are thousands of asteroids in the asteroid belt (which orbits between Mars and Jupiter), but the four that are most commonly interpreted in astrology are Pallas, Juno, Vesta, and Ceres. These are named after ancient Greek and Roman goddesses and are symbolically associated with many of their qualities. The correspondences of the asteroids are even more specific than planets, which can give us a deeper look at our own astrological reflection.

Asteroids weren't used in traditional astrology — but as both astronomical discoveries and social movements evolve, so does the practice of astrology itself. "The study of the asteroids within astrology is very new compared to the study of the planetary movements, as they were discovered in the 1800s, and the first asteroid ephemeris wasn’t published until the 1970s," astrologer Narayana Montúfar tells Bustle. "Coincidentally, this is was also the time in which feminism began taking off."

Given the timing in which the asteroids were applied to astrology and the symbolism behind their names that give them meaning, these celestial bodies are thought to be representative of the more "feminine" parts of everyone's psyche. "The discovery of the four asteroid goddesses relates to humanity being ready to explore the many different shades and sacred dimensions of feminine energy." Montúfar says. "Before these asteroids, astrology considered the moon (the mother) and Venus (the lover) the only expressions of feminine energy." Most of the major planets are named after masculine gods or figures — which sets the asteroids apart from the older norms and brings a much-needed balance to the zodiac's energy. It's important to note though that planets, zodiac signs, and celestial bodies have no gender, regardless of the deities or symbols they're named after. And the concepts they represent in astrology apply to every single individual, no matter their gender expression.

Not all astrologers use asteroids in their practice, but it's becoming more common, as their symbolism can add a fresh perspective and depth to an astrology reading. "Astrologers tend to pay more attention to these asteroids when they are in close aspect to a natal point or planet in someone's birth chart, because that’s when their biggest expression will manifest," Montúfar says. Looking up the placement of the asteroids in your birth chart by using an online calculator or consulting an astrologer can help shed new light on your cosmic profile.

Knowing what the asteroids mean in astrology can help you deepen your understanding of your birth chart, add some fresh energy to your current practice, and help you channel your mystical inner goddess. Read on for the scoop on the four asteroid goddesses and what they mean for your astrology.

Pallas (sometimes known as Pallas Athene) is named after the goddess of war and wisdom. But unlike aggressive planet Mars, this intelligent and warrior-like energy isn't about conquering battles using brute physical strength. It prefers using wisdom instead of weapons, and calling upon the power of reason, creativity, and strategy to get ahead. "Pallas represents our intellect, our strategy, and our problem-solving abilities — and it also relates to many forms of artistic expression," Montúfar says. Pallas in your birth chart represents the independent fighter inside of you. It symbolizes how you combine your knowledge, street smarts, and creative thinking to problem-solve and rally for a cause.

Venus may be the planet of romance, but Juno symbolizes the trials and tribulations of committed partnerships, true love, and soulmates. This asteroid was named after the goddess of marriage in Roman mythology, who was the wife of mighty but unfaithful Jupiter. In spite of that, Juno was an unwaveringly committed partner — and this tale symbolizes Juno's role in astrology, too. "Juno represents commitment and offers clues about our style of relating within partnerships, as well as the type of person we would marry or live with," Montufar says. You can look to your Juno sign to illustrate the qualities you look for in a long-term relationship and some of the themes that could be important for you when it comes to commitment.

Vesta is named for the goddess of the hearth and home, and in astrology, it represents our ability to be self-sufficient and self-reliant. Vesta is all responsibilities, passions, and focus regarding matters that are close to our hearts. "Vesta represents the fire with us, as well as what is most sacred to us," Montufar says. "It also represents sexual energy as a way to feel whole in ourselves, without the need for companionship." Unlike Juno, this energy is self-care oriented and independent rather than relationship-focused. In a birth chart, Vesta can help to show us how we function outside of our relationships, and the other important responsibilities that we devote ourselves throughout our lives.

The moon is known as the maternal planet of nurturing, and Ceres is associated with similar themes — although unlike the moon, Ceres is less about emotional issues and more associated with earthly and physical ways of caring for others. "As the archetype of motherhood, Ceres represents nurturing and self-care," Montufar says. "It can also represent loss, as Ceres lost her daughter Persephone to Pluto [in ancient mythology]." Ceres is named for the goddess of agriculture and harvests, and its placement in an astrology chart can tell you more about your role as a caretaker and how you nourish the people, things, and ideas in your life. Ceres is also associated with the hard work of "parenting" someone or something and raising something from seed to harvest.

More like this
Your December Astrological Forecast
By Nina Kahn
Here’s Your Daily Horoscope For December 2, 2022
By Mecca Woods
7 Dos & Don'ts To Follow For The December 2022 Full Moon
By Brittany Beringer
These Are The 3 Most Mellow Zodiac Signs
By Kristine Fellizar
Get Even More From Bustle — Sign Up For The Newsletter