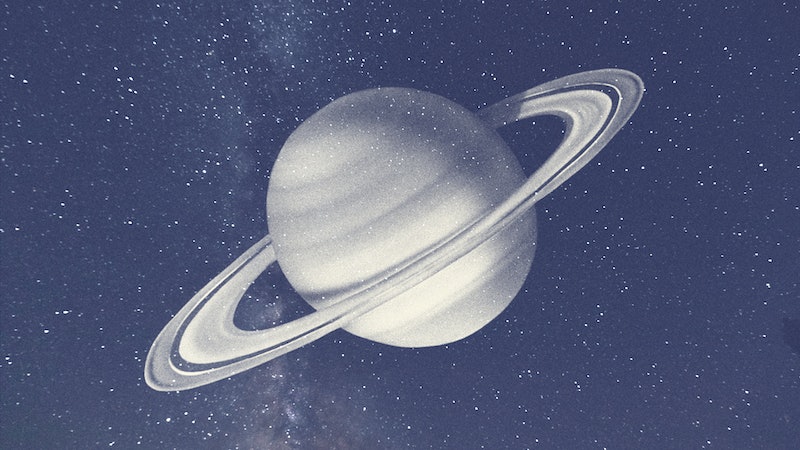 You’re probably familiar with the 12 zodiac signs, as most people are introduced to astrology through these archetypes. However, it's actually the planets in astrology that comprise the heart and soul of this mystical practice. Analyzing the planets' movement through the zodiac signs — as well as interpreting the aspects they form with one another on their journeys — is what astrology is all about, so understanding the meaning of each planet is integral to deepening your personal cosmic journey. Getting to know the ruling planet for your zodiac sign is a great place to start.

Each of the planets in astrology symbolize different parts of ourselves — including the way we think, express our love, chase after our goals, and more — and they have their own unique personalities and motives. Each zodiac sign has a ruling planet, too, and the planets’ qualities have a big influence the energy of the signs that they rule. While each planet will eventually move through every zodiac sign, planets feel more at ease and able to express their energy when they are transiting one of the zodiac signs they rule.

Traditional astrology incorporates the seven classical planets, which are Mercury, Venus, Mars, Jupiter, and Saturn, as well as the sun and moon. The sun and moon — which are also known as the luminaries — each ruled over one zodiac sign, while the rest of the planets ruled over two signs. However, the practice of modern astrology has expanded to incorporate the more recently discovered outer planets like Uranus, Neptune, and Pluto, each of which has been assigned their own sign of rulerships. In that system, Venus and Mercury are the only two planets that still have rulership over two zodiac signs.

Knowing which planet rules your zodiac sign can help you better understand your birth chart and make more sense of astrological transits as they happen — as the activity of our ruling planet can sometimes have a greater influence on us. For example, Mercury retrograde snags might hit the Mercury-ruled Geminis and Virgos out there especially hard, while the phases of the moon might have a more intense effect on lunar-ruled Cancers.

Learning about which planet rules your zodiac sign and how it influences your chart can help you understand your astrological energy more deeply. Read on to find out what they’re all about.

Red-hot planet Mars rules over feisty fire sign Aries, the first sign of the zodiac. Mars in astrology symbolizes passion, aggression, and the way we chase our goals — and its warrior-like spirit is expressed easily through the take-charge sign of Aries. Mars helps give Aries its trademarked zealousness, high energy levels, and powerful leadership skills, so and charge forward on all of its ambitious goals within this sign.

Romantic Venus is the planet of love, and it also rules over things like luxury, pleasure, and value. This is why it feels right at home within the realm of decadent and sensual Taurus, one of its signs of rulership. Taurus is an earth sign, meaning its focus is on material things and sensory experiences. We see Venus’ influence in Taurus when it comes to their love for pleasure, opulence, indulgence, and high-quality goods.

Gemini is a chatty, social, and intellectual sign — so it makes sense that its ruling planet is Mercury, the planet of communication and thinking. In air sign Gemini, Mercury gets to be its most articulate and thoughtful self. Gemini's curious and inquisitive nature perfectly aligns with Mercury's knack for sharing information and learning new things. We can see Mercury’s influence in Gemini when it comes to their quick wit, strong communication skills, and desire to learn new things.

The moon is the planet that governs our emotions, our feelings, and the things that make us feel comforted — and in astrology, it rules over sensitive water sign Cancer. As the most maternal, empathic, and nurturing sign of the zodiac, Cancer allows the moon's intuitive and caretaking nature to fully shine. We can see Cancer’s lunar influence through the sign’s gentleness, vulnerability, and feelings-oriented approach to life. Like the moon, which is always changing form in the sky, Cancers can also be quite moody, as their feelings change just as fast as the lunar phases.

Leos are zodiac royalty, so it makes sense that they're the one and only sign ruled by the star at the center of our solar system. The sun is the planet that rules our identity, creativity, and sense of vitality — all of which confident and self-expressive Leos have plenty of. Like its ruling planet, Leo loves to be the center of attention, and this fire sign brings a sun-like warmth, positivity, and radiance to everything it touches.

Mercury is one of the planets that still rules over two zodiac signs in modern astrology — so while Mercury's communication-focused side comes through in Gemini, its analytical side gets to shine in Virgo. Virgo is a practical earth sign, and its highly-observant energy excels at keeping things tidy and organized. As the planet of timing and scheduling, Mercury’s logistical influence in Virgo shows up in their keen eye for detail and their knack for catching errors.

Venus is the decadent planet of romance and pleasure, so it's no surprise that it still governs over two zodiac signs in modern astrology. In addition to Taurus, air sign Libra — the sign of balance and relationships — is ruled by Venus. While Venus’ sensual side comes through in Taurus, Libra's focus is on creating peace and building partnerships — so Venus' romance and harmony-loving side gets to come out and play here. Libra is also known for having an aesthetic eye and a thoughtful artistic flair, and this desire to create beauty is a Venusian influence.

Power-hungry planet Pluto rules over the sign of Scorpio. Pluto is named after the god of the underworld, and this small-but-mighty planet rules over transformations and everything that's hidden beneath the surface of our psyches. Similarly, Scorpio is naturally preoccupied with the more esoteric aspects of existence, too, and it wants to explore uncharted depths. Pluto is drawn to intensity, which helps to explain why Pluto-ruled Scorpio gets a reputation for being the dark horse of the zodiac.

In traditional astrology, Mars rules Scorpio, and this water sign embodies the planet’s more cutthroat and strategic side. Scorpio is powerful and stealthy, and like its traditional ruler, it’s determined to conquer its goals and crush its competition.

Jupiter is the planet of good luck and expansion, and it rules over the happy-go-lucky sign of Sagittarius. Fire sign Sagittarius is known for being optimistic and free-spirited, and it has Jupiter’s joyful and idealistic influence to thank. Just like its ruling planet, Sagittarius loves to learn, travel, and broaden its horizons. Through Sagittarius, Jupiter is able to try new things, see new places, and quench its thirst for philosophical growth in a way that it can't in any other sign.

Serious planet Saturn rules over the the zodiac’s cardinal earth sign, Capricorn. Capricorn energy is all about being diligent and pragmatic, so it works in perfect symbiosis with Saturn’s tough-love and rule-following approach. Pragmatic Capricorn is disciplined and hardworking, which satisfies Saturn's need for structure. While Saturn can sometimes be seen as a restrictive force in astrology, its influence is exactly what gives Capricorn its goal-crushing edge — they know how to put in the work needed to accomplish big things without taking any shortcuts.

Quirky Uranus rules innovative air sign Aquarius. Uranus is the oddball planet of the zodiac, and it’s all about sudden changes, bursts of inspiration, and challenging the status quo. Aquarius energy is highly-influenced by this rebellious and revolutionary vibe, as this forward-thinking air sign shuns tradition in favor of futuristic new ideals. When Uranus, pronounced YOOR-un-us, is in Aquarius, it can truly think outside the box.

In traditional astrology, Aquarius is ruled by strict planet Saturn. While Saturn’s rule-oriented and responsible edge might not seem aligned with this unconventional air sign’s vibe, its influence can help us see the structure and seriousness that lies beneath Aquarius’ visionary plans.

Neptune is the planet of illusions and dreams, and it rules over sensitive water sign Pisces. Pisces energy is emotional, poetic, and spiritually-inclined — and it has Neptune’s otherworldly influence to thank for that. The Piscean reputation for living in a dreamy fantasy world and craving an escape from the mundanity of everyday life connects directly to the illusive rose-colored veil that planet Neptune draws over everything it touches.

In traditional astrology, mystical Pisces is ruled by Jupiter — the planet of good luck and expansion. This influence highlights Pisces’ spiritual-seeking nature and strong sense of idealism.

More like this
The Temperance Tarot Card Wants You To Connect With Yourself
By Kristine Fellizar
The Fool Tarot Card Meaning, Explained
By Nina Kahn
The Spiritual Meaning Of The September 2022 New Moon
By Nina Kahn
These 4 Signs Are The Sarcastic Jokesters Of The Zodiac
By Brittany Beringer
Get Even More From Bustle — Sign Up For The Newsletter

This article was originally published on July 29, 2020