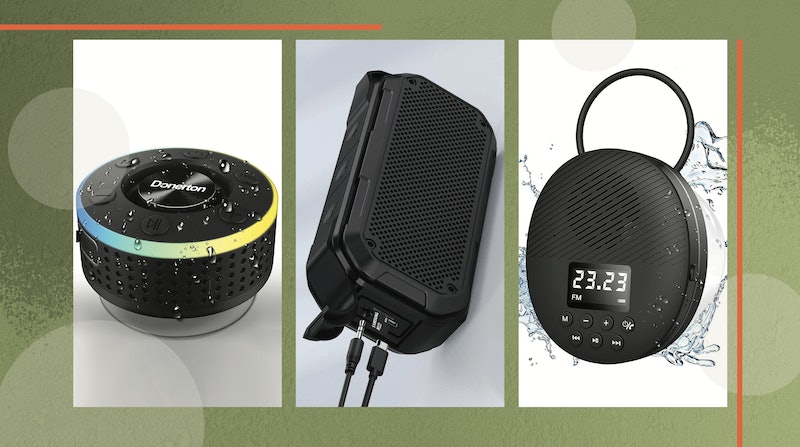 If you want to jam out to music while you shower, the best shower radios make it possible thanks to a water-resistant casing and high-volume speakers that are loud enough to hear when the water is running. When choosing a protective casing for your bathroom speaker, look for a radio with an IP rating of at least IPX5 or higher, meaning it’s fully waterproof. As far as speaker quality goes, the noise of a shower reaches up to 70 decibels, so you want to look for a radio that gets even louder. If you can’t find its volume listed in decibels, the radio’s wattage can provide a clue as to how it handles sound; shower radios tend to be small and generally low wattages, but even so, the higher the wattage, the louder the speaker usually can get without distorting the sound. It’s worth noting that the best shower radios may not be specifically designed for a shower setting — but as long as they’re sufficiently waterproof, you can use them in the shower, anywhere else in the house, and on any adventures that would be made better by your favorite tunes.

A crystal clear, waterproof shower radio is only as good as its listening options, though. Look for programmable preset buttons to have your favorite stations a button-push away. To listen to playlists or podcasts, choose a radio that doubles as a Bluetooth speaker (which is a feature you’ll find on every shower on this list). Shower radios always have an FM radio, but if you want AM radio, too, you won’t find too many good options — you’ll likely be better off with a wireless shower speaker that connects to a tabletop AM/FM radio instead. When it comes to other features, if you want to make calls in the shower, make sure it has a built-in mic. A built-in clock is convenient for keeping track of time when showering before work, while colorful LED lights transform your shower into a nightclub when you need to unwind after a long day or pump yourself up in the mornings.

No matter which features you need, I’ve got you covered with these four incredible shower radios, all complete with waterproof or water-resistant casing, quality audio, and a range of listening options.

1. A Shower Radio With LED Lighting

A 5-watt speaker and IPX7 waterproof rating make this shower radio from Donerton a high-performing option when it comes to both the sound quality and durability. IPX7 means it can withstand being submerged in water for up to 30 minutes, giving you plenty of time to fish it out of the bathtub if it accidentally falls in. That said, the radio can attach to the shower wall with a strong suction cup, so it’s unlikely to fall in the first place.

The 5-watt speaker provides crystal clear sound, even played at higher volumes, and it can play for up to 7 hours on a single charge. When you’ve got your music selected, turn on the multicolored LED light to complete the mood. You can choose between seven different light modes.

With all these features and a built-in mic for making phone calls to boot, it’s no wonder this powerful little shower radio has earned an overall 4.5-star rating on Amazon after more than 1,800 reviews.

According to one reviewer: “This has option for Bluetooth radio or for FM radio. I love the suction cup on the back so it can stick to my shower perfectly. The sound is crisp and really good quality. I definitely recommend this product!”

2. A Budget-Friendly Radio With 2 Speakers

With a price tag under $30, this waterproof radio from LEZII has is an absolute steal. Two drivers provide a stereo sound experience, and with 5 watts of power, you’ll be able to crank up the volume without dealing with too much distortion. Plus, the IPX7 waterproof casing keeps the radio safe, even if it falls in the tub.

With an overall Amazon rating of 4.3 stars after more than 4,000 reviews, this shower radio has become a popular pick not just for its price and quality but all of its extra features. Users can listen to music on the built-in FM radio or connect it to another device via Bluetooth (or via an aux cable, if you’re not using it in the shower). It even has a TF card slot for playing music stored on a memory card. No matter how you choose to play music, you get up to 12 hours of playtime.

This isn’t explicitly a shower radio, so feel free to take it with you anywhere. For in-shower use, it doesn’t have a suction cup to keep it attached to the wall, but you can hang it from a shower caddy, via the portable D hook, or stand it on the edge of a tub or shower shelf.

The radio comes two different colors and in a single-speaker version that’s even easier on the wallet.

According to one reviewer: “Love the sound quality of this speaker. I was actually surprised. I hang it under my shower head and it functions perfectly. Couldn't be happier.”

With 15 watts of power, this durable shower radio from Xeneo is one of the best choices for listeners who love bass-heavy music thanks to the digital signal processor and passive radiators on the ends of the speaker, which allow the speaker to develop and play those lower bass tones. Sit it on the side of the tub with its flat-bottomed design, or use the attached string to hang it wherever you’d like. The IPX6 waterproof rating protects it from heavily spraying water, even if the water pressure is super high.

In addition to a strong waterproof case and incredibly rich bass sound, this speaker offers FM radio, Bluetooth connectivity, and a built-in mic for phone calls. It can even be paired with a second speaker to create a surround sound experience in your shower. It comes with a travel case if you wish to take it beyond the shower, plus a 1-year warranty. Choose from a few different colors in packs of one or two.

According to one reviewer: “This just lives in my shower, no issues with moisture at all. I love it, it needs a charge every once in a while, but other than that it's perfect for singing along in the shower! I'm buying another one for my woodshop.”

4. A Shower Radio With A Digital Clock

The AGPTEK shower speaker offers an FM radio, Bluetooth connectivity, a SD memory card slot, and a built-in mic so you’ll have no shortage of options for listening (or even chatting on the phone) while you shower. It has 5 watts of power, and multiple reviewers praise the sound quality, with one writing, “sound quality and volume is amazing.” The IPX5 waterproof rating means this will handle getting seriously sprayed with water in the short term, but may not be great for a really wet situation, like being submerged in a bath. Fortunately, it has a strong suction cup and a detachable lanyard, so you can securely mount this to a wall or hang it from anywhere that’s convenient.

Unlike the other radios on this list, this radio actually happens to have a digital display. The display shows a clock and the radio station playing. You should get up to 20 hours of playtime before needing to charge the battery.

According to one reviewer: “I've owned a couple of the expensive shower radios and I just couldn't bring myself to pay $50+ for another one so I thought I'd try this little unit. I rarely believe the hype manufacturers write about their products but this one lives up to that hype. The sound is really good and loud. I also like the fact that I don't have to buy batteries for it. I use mine in the shower and I keep it on while listen to it while I get ready for work...I have had mine for about 45 days and I have not had to recharge it since the initial charge. I am really impressed with this product and I am going to buy a few more”

Though it’s not a radio, this shower speaker by iFox is a great option if you want to stream radio from another device via Bluetooth, especially if you like to listen to AM stations. With a 4.6-star overall rating and more than 17,000 Amazon reviews, this waterproof speaker is one of the top picks for shower singers everywhere.

The IP67 waterproof case means the speaker is durable enough to hang out in your shower or go with you on outdoor adventures. It’s waterproof enough to be submerged in up to 3 feet of water, and the 6 in that IP67 means dust and sand can’t get inside the case if you take it out to the backyard or on a beach trip.

For use in the shower, you can mount the speaker right on the shower wall using the included suction cup. When you’re done, take it down and use the loop to hang it from a hook or just set it right on the table or shelf. You should get up to 10 hours of playtime between charges.

According to one reviewer: “This speaker actually stays suctioned to the shower and really is water proof! It has better sound than I anticipated from a shower speaker. I like that the bluetooth connects so easily and quickly. The bass is decent for a small device.”

More like this
How To Hide Cords Under A Desk
By Jenny White
The 10 Best Brooklinen Alternatives
By Lauren Moison
The 6 Best Nontoxic Baking Sheets, According To Food Experts
By Megan Gray
The 12 Best Lemon Candles
By Lauren Moison
Get Even More From Bustle — Sign Up For The Newsletter
From hair trends to relationship advice, our daily newsletter has everything you need to sound like a person who’s on TikTok, even if you aren’t.