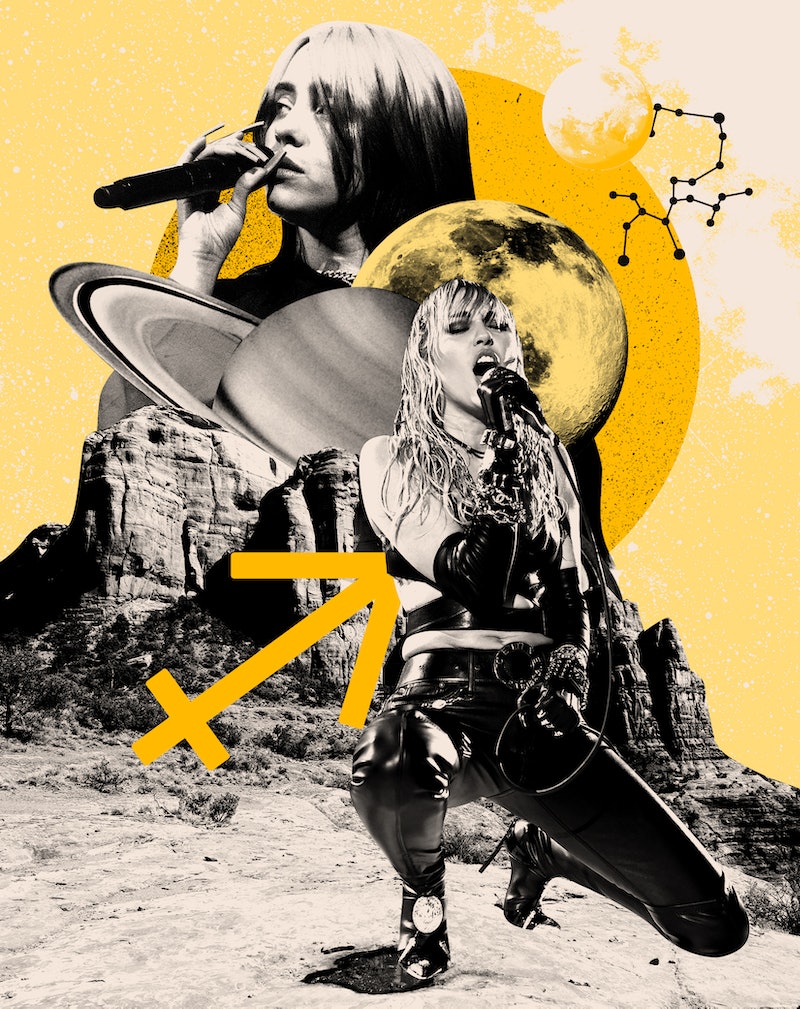 Sharing a zodiac sign with someone doesn’t guarantee a natural cosmic kinship. In fact, some of the zodiac’s archers feel strongly that November Sagittarians and December Sagittarians may as well be aiming their arrows toward opposite sides of the galaxy. Of course, the planetary placements in our birth charts will vary based on the year, day, and even minute that someone is born, which means we’re all unique snowflakes in the astrology world. But are there any actual astrologically-backed differences between a November Sagittarius and December Sagittarius? The short answer is yes, but there’s more to it than you’d think.

There are lots of reasons why people with the same zodiac sign can still be very different, according to astrology. After all, our birth charts are incredibly complex maps of who we are. So while people born between approximately November 22 and December 21 all have a Sagittarius sun sign, it’s likely that they’ll have different moon, Mercury, Venus, Mars, and rising zodiac signs. They’ll probably still share some core Sagittarius traits but could have serious distinctions in the way they approach relationships, express themselves, relate to their emotions, and chase their goals.

But there’s another reason why Sagittarius personality traits vary so much from person to person — and it’s because the zodiac signs are broken up into subdivisions called decans. There are three decans for each sign, and they’re comprised of 10 zodiacal degrees each (every sign takes up 30 degrees on the zodiac wheel). The first 10 degrees of a sign are assigned to the first decan, the second 10 are assigned to the second decan, and the final 10 degrees go to the third decan. These decans change the way the sign’s energy is expressed. Because the sun travels approximately one degree per day, that means that all November Sagittarians are first decan Sagittarians, while most Sagittarians born in December (with the occasional exception of those born during the first day or so of the month) will be either second or third decan Sagittarians.

Let’s take a peek at some of the major differences between November Sagittarius and December Sagittarius, keeping decans in mind — as this astrological concept can show us all kinds of deep and varied complexities when it comes to the zodiac’s mutable fire sign.

Sagittarius is a sign known for its thrill-seeking ways, but December-born Sagittarians may be even more likely to say yes to an exciting impulse offer than a November Sagittarius. This is due to the fact that about half of December Sagittarians are co-ruled by action-oriented planet Mars, which is all about boldly making moves and following impulses. This planetary influence emphasizes these December Sagittarians free-spirited nature — so they’re extra prone to making spur-of-the-moment plans and impromptu decisions.

As first decan Sagittarians, November Sags are fully ruled by larger-than-life planet Jupiter, which magnifies their natural love of learning, knowledge-seeking, and spiritual growth. While all Sagittarians are on a lifelong quest for mental stimulation, November Sagittarians are likely to be even more philosophical and higher-minded. These Sagittarians are sponges when it comes to absorbing new perspectives, understanding belief systems, and opening themselves up to new ways of thinking — all thanks to Jupiter’s expansive influence.

December Sagittarians Can Be Self-Righteous

Almost all Sagittarians born during December are second or third decan Sagittarians — meaning they’re co-ruled by either Mars (planet of action) or the sun (planet of ego). These two planets combine some added extra zealousness and self-confidence with Sagittarius’ already-strong moral compass. That said, if you’re a December Sagittarius, you might find yourself getting ultra opinionated about your beliefs or even feeling a little superior to others when you’re passionate about something.

As one of the mutable zodiac signs, Sagittarians thrive on having lots of variety in their lives — but no one’s plagued with the bite of the wanderlust bug quite like a November Sagittarius. As first decan Sagittarians who are arguably blessed with the largest amount of Jupiter’s happy-go-lucky vibes, these naturally excitement-seeking people are always on the hunt for their next new experience and adventure. Of course, this can lead to them being overly-distracted and easily bored, so it’s important for them to give things a chance before allowing another shiny object to catch their eye.

December Sagittarians Are The Life Of The Party

No Sagittarius has ever met a party it didn’t like, and vice versa. But because most December Sagittarians have both the sparkly sun and energetic Mars as additional planetary influences, these archers often crave attention and adrenaline rushes even more so than their November-born counterparts — which can shine a light on their wild side. While all Sagittarians serve life-of-the-party energy, December-born Sags can’t help but stir up a scene and have all eyes on them wherever they go.