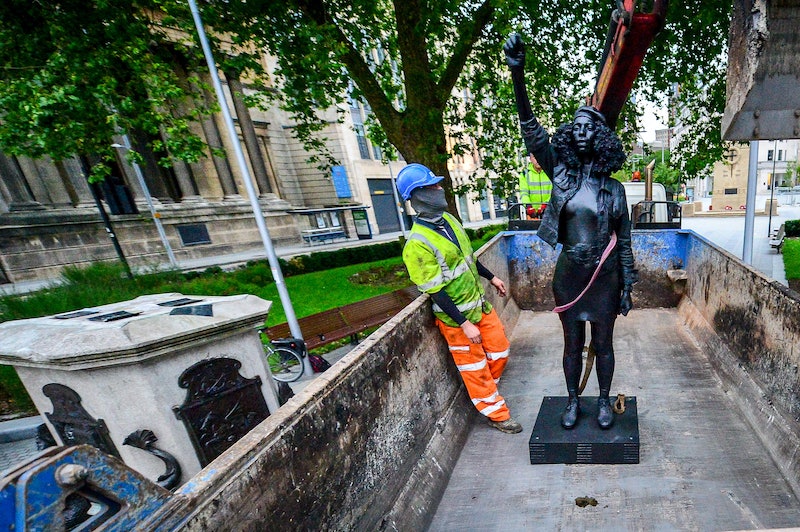 Just over 24 hours after being erected, the sculpture of protestor Jen Reid has been removed by Bristol City Council. Taking the place of the recently removed Edward Colston statue, the sculpture took inspiration from the moment in which Reid stood on the empty plinth during Black Lives Matter protests held in June.

Designed and created by artist Marc Quinn, the statue was placed on the plinth with "no formal consent," as the artist wrote in a statement before its removal. "Jen and I are not putting this sculpture on the plinth as a permanent solution to what should be there," Quinn said. "It's a spark which we hope will help to bring continued attention to this vital and pressing issue."

Bristol City Council cited the absence of consent as one of the reasons for its removal, as well as giving the people of Bristol the choice as to what will replace Colston's statue. "We want the fuller story of Bristol and by telling that story we will be in a better position to make judgements on what we choose to celebrate, who we celebrate and who we are," Bristol Mayor Martin Rees said during a Facebook Q&A on Wednesday (July 15), per BBC News.

"Our belief is that process will put us in a better position as a city to have a discussion and come to a collective view to what we put on that plinth if anything," he added.

Following its removal, the Reid statue will be held at a museum in the city "for the artist to collect or donate to our collection," the council tweeted on Thursday (July 16). What Quinn and Reid decide to do remains to be seen, but Quinn has said that, if the statue were to be sold, all profits will go to charities chosen by Reid. "Namely Cargo Classroom, a Black history syllabus created for Bristol teenagers and The Black Curriculum, a social enterprise founded in 2019 by young people to address the lack of Black British history in the UK curriculum," the artist said.

More like this
Watch Jacinda Arden’s Devastatingly Honest Resignation Speech
By Sam Ramsden
Gen Z Are Twice As Likely To Identify As Queer, According To New Data
By Sam Ramsden
Here’s Where The NHS Nurses’ Strike Currently Stands
By Sophie McEvoy
Twitter Has *A Lot* To Say About The "Single Penalty”
By Sam Ramsden
Get The Very Best Of Bustle/UK
Sign up for Bustle UK's twice-weekly newsletter, featuring the latest must-watch TV, moving personal stories, and expert advice on the hottest viral buys.