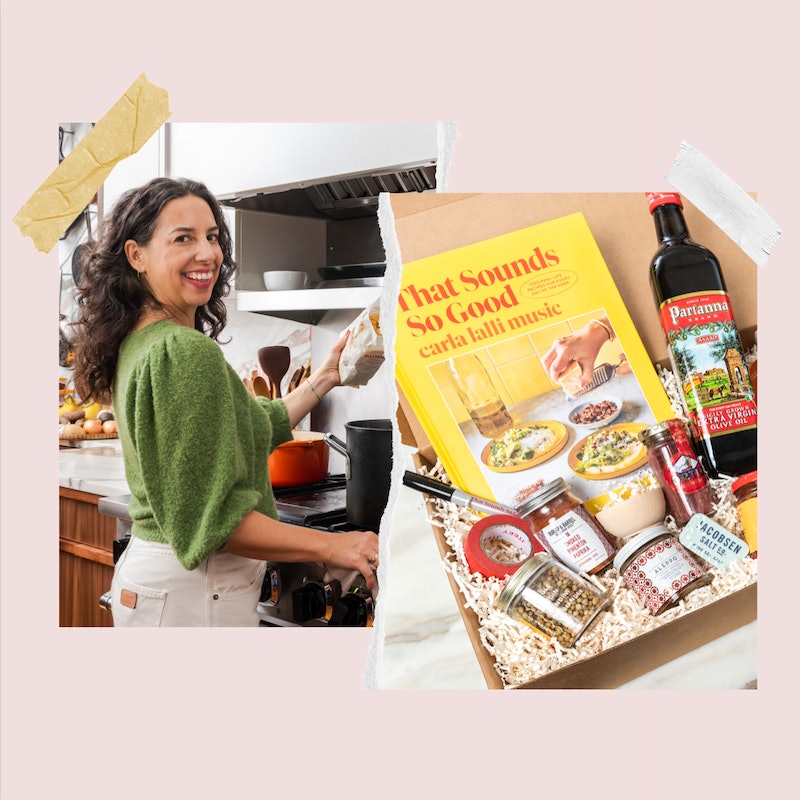 One way to describe Carla Lalli Music is to point to her “cool aunt energy.” The chef, cookbook author, and YouTube personality approaches cooking with the kind of no-fuss demeanor that cuts tension at a family dinner like a knife through butter, but she is also, literally, a cool aunt. When asked about the Sunday ragu recipe from her new cookbook, That Sounds So Good, the 49-year-old tells Bustle the recipe was originally crafted in honor of her newborn niece Gia — sort of.

“She was a tiny infant and definitely was not eating at this dinner,” Music says, laughing. “But [the ragu] was a way to get my sister to come over with her spouse and baby and be together.” It was an offer her sister couldn’t refuse.

Bringing people together through food is a fundamental part of Music’s ideology. Entering holiday party season, that means folding in fun (and cutting out stress) at all stages of cooking, from prep time to cleanup. Her latest cookbook, That Sounds So Good, is a collection of 100 “real-life recipes” that are designed to fit into any schedule. She’s also recently partnered with delivery platform Foxtrot Anywhere to ship her favorite pantry essentials — from Partanna Olive Oil to Diaspora Co. Coriander — nationwide ahead of gifting season.

Here, Music breaks down the key ingredients to a perfect holiday party.

If anything was possible — no budget, no limits —what would your ideal holiday party look like?

I actually have a favorite party. It’s called S.A.D.A.P. — Seasonal Affective Disorder Awareness Party. It’s basically a party for when the days are really short to celebrate being together. We pick a day between the two major holidays when people aren’t totally maxed out on Christmas parties. I light a fireplace in our backyard, and it’s supposed to be about light and love and getting through the dark times — literally.

I’ve come really close to my ideal with that party. I would add an actual staffed bartender, rental glasses, and a cleanup crew. But that’s just for the host. As far as the food goes, I’d expand everything I’ve done in the past. So, instead of a half-wheel, I’d have a whole wheel of parmesan cheese sitting on the table with lots of little cheese knives that people can chisel out their perfect bite. There would be someone slicing serrano ham to order. I would have beautiful clementines and tangerines with the leaves still on all over the place. And maybe somebody else taking gougères out of the oven all night long.

Why not? You said no budget.

Fair. When you’re hosting, are you more into finger foods and charcuterie, or do you prefer a sit-down dinner party?

It really depends on how many people are coming. I’ve kept at it 10 or 12 people for sit-down dinners, just because of the size of my table. If I’m doing that, it’s definitely family style. If it’s a big party, then for sure finger food.

I do want people to feel relaxed. I like parties where it’s festive and there’s a reason to dress up, but it’s not going to feel formal. So, as soon as people are eating with their hands, that drops really quickly.

And what about drinks? Do you have a go-to cocktail that you like to make around the holidays?

There’s one that’s in That Sounds So Good called the Cynar Spritz. I use Cynar, an amaro, for it, but it’s a very standard spritz. Two parts of amaro, one part red vermouth, and then I either put prosecco or bubbly water. Serve over ice. It looks pretty, it’s kind of amber-colored, and it’s bubbly, but it’s not too alcoholic. At a party, you can put up a bar with the recipe posted and anyone can make it for themselves.

What’s your go-to recipe from your new cookbook, That Sounds So Good, for when a host is down to the wire but still wants to offer a festive meal?

What I tried to achieve in the book, even for longer-cooking recipes, is that they really will require only about a half an hour of busy work from the cook. Then, the meal is slowly cooking on low heat and you don’t really have to fuss with it. The hands-off pork and beans is really great because it’s a big roast, but you season it a day before and just put it in the oven. As it cooks, it bastes the black-eyed peas with all of the cooking juices. And the beans are cooked through at the same time it takes to slow-roast the pork. That’s very traditional for New Year’s Day.

I would do a Sunday ragu if it’s going to be a smaller group for the holidays. You can do that a couple of days ahead of time and just chill it so that when people come over, all you have to do is boil the pasta and heat the sauce back up. That’s a really nice, family-style dinner.

A lot of people have a tradition that officially marks their mental entrance into the holiday season, like getting a seasonal Starbucks drink on Nov. 1. What’s that tradition for you?

I think it’s around mid-October, when I start my family text thread about the Thanksgiving menu and whether we’re deviating from our standard hits. Because if you want to change something about our menu, that has to be voted on unanimously. So that text thread, for me, means, “OK, we’re in it.”

More like this
Dunkin’s Valentine’s Day Lineup Includes A Drink That Tastes Like Dessert
By Alexis Morillo
12 Aphrodisiac Desserts To Spice Up Your Valentine’s Day
By Kaitlyn Wylde
23 Super Sweet Things To Write In A Valentine's Day Card
By Karen Belz and Lexi Inks
8 Things You Can Do To Appreciate Lunar New Year
By Elizabeth Tsung
Get Even More From Bustle — Sign Up For The Newsletter
From hair trends to relationship advice, our daily newsletter has everything you need to sound like a person who’s on TikTok, even if you aren’t.