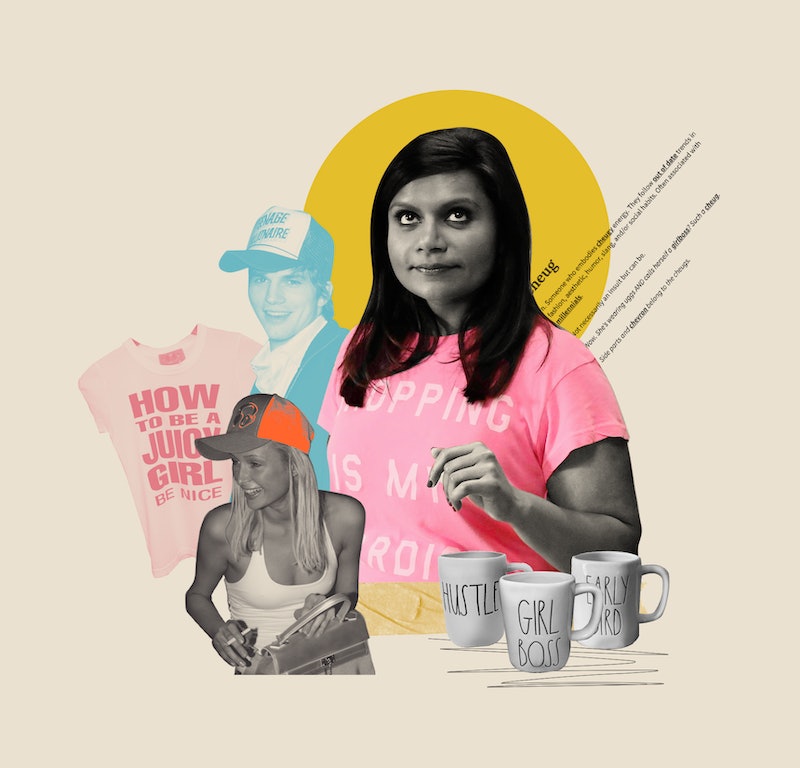 After Gen Z issued a moratorium on side parts, in early 2021, Laura, 33, a New York City-based writer and comedian, tried and failed to make a middle part work for her face. But when she scrolled past a TikTok naming “millennial cringe” as “cheugy,” she immediately felt a flutter of recognition: she, along with her side part and skinny jeans, fell firmly in that category.

“Cheugy” refers to “a person who currently follows out of date trends usually stemming from things that were popular in middle school & high school,” according to the Instagram page cheuglife. (That’s Gen Z’s middle and high school, not millennials’.) It’s similar to basic, although it covers someone who chooses to be out-of-date, versus someone who doesn’t know what’s trendy. “It’s Ashton Kutcher in a trucker hat on Punk'd and Paris Hilton wearing Von Dutch trucker hats on The Simple Life,” says Tawny, a 35-year-old writer and sobriety activist in New York City. Other things that fit the bill, per different millennials: Peloton, Bravo, Starbucks, rompers, Nordstrom Rack sales, Apple Watches, and Mindy Kaling’s whole schtick. “Things that are far enough outside of the trend cycle to be uncool, but not so far they come back around in a nostalgic way,” Laura adds.

An April 2021 New York Times article catapulted the term into mainstream acceptance, after it was first popularized in a Gen Zer’s March 2021 TikTok, but plenty of millennials, in truly cheugy fashion, are still just discovering the term. Google Trends data shows that after its mid-May peak, people are continuing to search for the slang, suggesting it has serious staying power (particularly for a word that means “untrendy”). If you’re one of the millions who’s viewed #cheugy on TikTok, you’ll see daily videos of users challenging themselves to come up with “cheugy phrases” or confess their appreciation for bridesmaid font. Unlike other attempts Gen Z has made to mock millennials — for loving Harry Potter and Nasty Women, for example, or the aforementioned side parts — “cheugy” is one that the older generation isn’t rejecting outright. It started as a way to describe things that are uncool by design, but some are discovering that that’s part of its charm.

The broader acceptance of the word has allowed millennials to take pride in their cringey tendencies, further setting themselves apart from Gen Z. For Stewart, 28, seeing a Gen Zer call TJ Maxx cheugy on TikTok in June — after she had just exited the store herself — helped her come to terms with her innate untrendiness. “At the point where I turn the volume off on the Peloton to watch Bravo, there’s really no denying it,” the New York City-based comedian tells Bustle.

Personally, I had never heard the term before writing this article — a fact that, in and of itself, makes me a little uncool. (My sister, who’s five years younger than me, simply said “duh” when I told her about my discovery.) After Googling Rae Dunn, the viral pottery brand with slogans like “But first, coffee,” I bought $70 worth of mugs for my friend’s wedding. It’s quintessential cheug — both the slogans and the aesthetic.

For some millennials, it’s better to own their antiquated tastes than try to compete with Gen Z’s cool factor. “At 33 years old, it'd be cringe if I wasn't a little cheugy,” says Laura. “Imagine if I was taking all the time and money to keep up with every micro-trend? It'd be like Amy Poehler in Mean Girls.” Jordan, 32, a Sacramento-based government analyst, adds that there’s no shame in liking things that are untrendy precisely because they’re so mainstream. “There’s usually a reason lots of people enjoy something — because it’s enjoyable.”

Stewart adds that these videos resonate with both their Gen Z and millennial viewers, no matter whether they're pro- or anti-Dunder Mifflin T-shirts. “I mean, why would these videos be going viral if being cheugy weren’t cool?”

More like this
On TikTok, The #RecordMe Trend Has Users Being Chaotic In Public
By Meguire Hennes
Here’s How To Get Verified On TikTok
By Emma Carey
What Does POV Mean On TikTok? The Popular Acronym, Explained
By Emma Carey
Manifest Your Dream Life With The Viral 'Tinkerbell Effect'
By Meguire Hennes
Get Even More From Bustle — Sign Up For The Newsletter