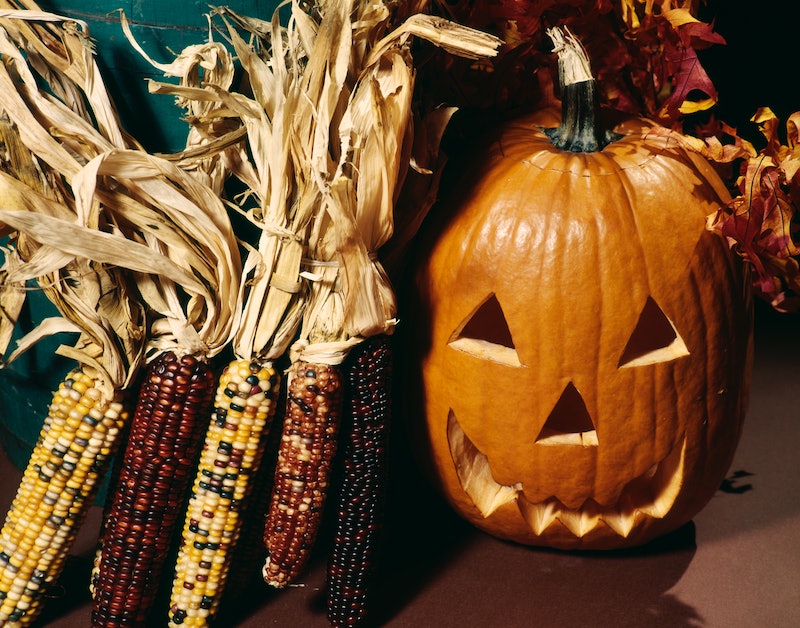 Spend all year planning your Halloween costume? You’re not alone. A 2019 survey found that Halloween is millennials’ favorite holiday, because who doesn’t love a theme party. But the history of Halloween extends way beyond our present-day affairs with dubious costume contests. Halloween’s dark history includes a celebration of communicating with the dead and wearing masks made from dead animals, among other creepy facts.

The day we now celebrate as Halloween has its roots in pagan customs dating back more than 2,000 years. Halloween marked the Celtic New Year and was originally called Samhain, per the National Museum of Ireland, which translates to “summer's end” in Gaelic. Many stories have been passed down by word of mouth and live on in folklore, or in the memories of your grandmother and great-gran.

“The tie to the season is one of the reasons why Halloween fits the autumn,” folklorist Jack Santino, Ph.D., tells Bustle. “Harvest is a reaping of life, so as to sustain life. The symbolism works very well.” OK, but if it’s a celebration of fall, then why is Halloween scary? Santino notes that historically, Halloween was a safe way for people to play with the concept of mortality, engage in supernatural activities, and dress up in ways that were not socially acceptable the rest of the year — thus creating the spook factor.

Halloween is a very different holiday today, but its ancient roots still inform the way we celebrate. The creepy facts about Halloween might give new meaning to your All Hallow's Eve celebration.

1. The Original Spiritual Meaning Of Halloween

In Celtic traditions, Halloween, or Samhain as it was called, was a day when the line between the living and the deceased was blurred. On this day each year, Celtic priests known as Druids were able to communicate with the spirit world and bring back fortunes for the coming year. Per National Geographic, Druids dressed in animal skins, impersonated the dead, and offered harvest-themed sacrifices to their gods around bonfires. When Christianity came to Celtic countries, these events were absorbed into the Christian calendar and given new religious meanings.

2. Why Jack-o-Lanterns Are Associated With Halloween

If you stop and think about it, craving a face on a gourd, putting a candle in it, and setting it out on your porch is a pretty weird practice. However, it's something most people have always done without questioning why it's part of celebrating Halloween.

The story behind the Jack-o-Lantern is actually pretty creepy. The tradition of carving Jack-o-Lanterns is based in Ireland, though it began with turnips instead of pumpkins. According to Michigan State University, legend has it that a man named Stingy Jack trapped the devil, and said he would only let him go if the devil promised Jack he would never go to hell. The devil agreed, but Jack failed to consider that not going to hell didn't mean he would go to heaven either. Jack ended up in what is known as purgatory in some religious traditions, and he was condemned to roam the earth as a ghost for all of eternity. The lantern may also have emerged as a way for people in remote areas to scare away uninvited visitors, like the ghosts who roamed on All Hallow’s Eve.

3. The Origin Of Bobbing For Apples

These days, the most you’ll get from an apple-bobbing contest is very wet, but back in the day, Santino says, it was more perilous. “The apple would be suspended from the ceiling, and you’d have to try to get a bite of it with your hands tied behind your back,” he says. You could be blindfolded, too. “It was called snap apple; the idea is that the apple might hit you in the face.” MentalFloss notes that some versions of the game would involve a lit candle on one end of the board suspending the apples, which would be even less pleasant to get thwacked in the face with.

Santino notes that like a lot of Halloween traditions, it used seasonal produce: nuts, apples and other autumnal crops are a big part of the harvest season. The game is still played this way in Ireland.

4. Why Bats Are Halloween Symbols

Bats are closely associated with Halloween for a variety of reasons — they’re nocturnal, and they carry a host of creepy, vampiric associations thanks to Bram Stoker — but there are old folk beliefs about them, too.

One myth was that if a bat was spotted flying around one's house three times, it meant that someone in that house would soon pass away. This likely came from an ancient Roman belief recounted by Pliny the Elder, which held that carrying a bat around your house three times would protect you from bad luck. Per the Library Of Congress, a bat flying into the house was also seen to foretell a person’s demise, particularly if it landed on one person in particular. (That bats carry all kinds of fatal diseases doesn’t seem to have factored into this charming piece of folklore.)

5. The Purpose Of Halloween Costumes

The origin of the Halloween costume may actually have a practical purpose — to blend in with spirits, according to the Museum of Arts & Sciences. During Samhain, Celtic people believed there was a heightened ability to communicate with the spirit world, and not everyone thought that was a good idea, so they tried to blend in with them instead. If you looked like a spirit, you’d be more likely to be left alone.

The Library of Congress suggests another theory: that costumes allowed people to cause trouble, beg for food, or generally act in ways they normally wouldn’t, without fear of being recognized. They weren’t escaping ghosts — they were escaping judgey neighbors.

6. The Romantic Undertones Of Halloween In History

In less-than-progressive times, getting eligible women married off was a top priority, and women were expected to help things along by participating in some pretty strange traditions on Halloween to increase their chances of snagging themselves a husband. Even as recently as a century ago, per The New York Times, Halloween was more closely related with love than spooky times. In fact, in a game of snap apple, whoever bit the first apple would be the first one to get married of the group.

Santino tells Bustle that romantic fortune-telling was once very much part of Halloween, but then it moved to Christmas and then to Valentine’s Day. “There are a lot of traditions, and some of them are a bit scary,” he says. “One of the things that would be done was that nuts, like hazelnuts, would be placed near the fire in the hearth, in pairs. Then, eventually, the heat might make the nuts explode.” The thinking, he says, was that the nuts represented a couple; if they exploded, the couple wasn’t going to survive, but if they stayed whole, so would their relationship.

Another popular version, he says, was to walk down a stairway while holding a mirror over your left shoulder; supposedly, you’d see the image of your future love in the reflection. Have a well near your house? “You could tie nine knots in a rope and put it down a well, and see your future partner in the water,” Santino says.

Another story suggests that eating a sugary bedtime snack made from nuts would increase a woman's chances of dreaming about her future husband. Other tales have women throwing apple peels over their shoulders in the hopes that the peels will land in a way that forms the initials of their future mates, or looking at egg yolks to see if they formed faces. But Santino warns that folklore often mentions situations where these stories went wrong, and women doing the rituals were somehow doomed.

7. Why Black Cats Are Associated With Halloween

Black cats have become so synonymous with Halloween that, in order to protect the felines, most animal shelters won't allow adoptions of black cats on Halloween, according to The Spruce. The myth that relates black cats to witches goes back to the Middle Ages, and despite this legend being totally false, many people still fear black cats.

Once the most worshipped creatures in the animal kingdom thanks to the Egyptians, the popularity of cats began to decline in the Middle Ages, because people started to associate them with witches. As a fear of witchcraft washed over Europe at a feverish pace, stray cats that were often tended to by old women who were feared to be witches. Single, elderly women were accused not only of witchcraft, but also of being able to actually transform themselves into black cats.

8. Why Spiders Are Associated With Halloween

Spiders can have two meanings on Halloween — one comforting and one scary. One superstition holds that if a spider falls into a candle or a flame and is consumed, witches are nearby. But it’s not all bad: If you spot a spider on Halloween, it may mean that the spirit of an ancestor is coming to see how you’re doing.

9. The Role Of Witches In Halloween

Historically, in the United States, being a witch has not been considered a good thing. Salem Witch Trials, anyone? However, in Celtic times, witches were an important part of Samhain. One of the origins of the modern Halloween witch is a pagan goddess known as "the crone," also known as the “the earth mother” and the “old one,” who was important in the harvesting season. But over time, this ancient goddess merged with other pre-Christian ideas of witches as malevolent or bloodthirsty. And, well, here we are.

10. The Origin Of Trick Or Treating

Santino tells Bustle that Halloween was once a much more adult holiday, based on the idea of “mumming,” where people went from door to door performing. “They might mask or dress in disguise, roaming from home to home,” he says. And when they’d finished their performance, whether it was a rhyme, a harmonica jig, or something else, they expected to be paid. “Money, or a small bit of fruit, or you’d pass a bottle around,” Santino says.

This is where the idea of trick-or-treating comes from. Originally, Santino says, mummers and performers wouldn’t leave until they were rewarded. “If a person refused to participate, it was thought there might be a bit of harassment — what’s called rough music, where people rattled pots and pans, or simply refused to leave!”

He also notes that the idea of choosing between tricks or treats likely emerged in America in the 1930s, partly as a way to control the intense pranking that emerged during the Great Depression. “Pranking on Halloween was much more common when I was growing up — you’d rub soap on a car window, or you’d throw eggs at a house — but if you read traditionally, some of it was pretty dangerous,” he says. “Leaving logs in roads, tipping over outhouses, that sort of thing.” Other favorites? Dismantling their target’s carriage and reassembling it on their roof, or simply painting their cows.

11. Why Fairies Were Once A Big Part Of Halloween

Halloween celebrations in the U.S., Santino explains, likely emerged in the 19th century when Irish and other European immigrants came over, bringing their All Hallow’s Eve traditions with them. But one element that didn’t come with them is fairy lore.

“Halloween was a day that was important to the fairies,” Santino says. “And fairies could be dangerous. They could steal babies, and trick you in ways that could cause physical deformities.” Historian Dr. Bob Curran told Culture Northern Ireland that historically, fairies were believed to take the spirits of those who’d passed on in the prior year to the Gates of Hell on the night of Halloween. And if you met them on the way, they’d take you with them. At least it’s a good way to convince kids to come home early from trick-or-treating.

This article was originally published on Sep. 27, 2017