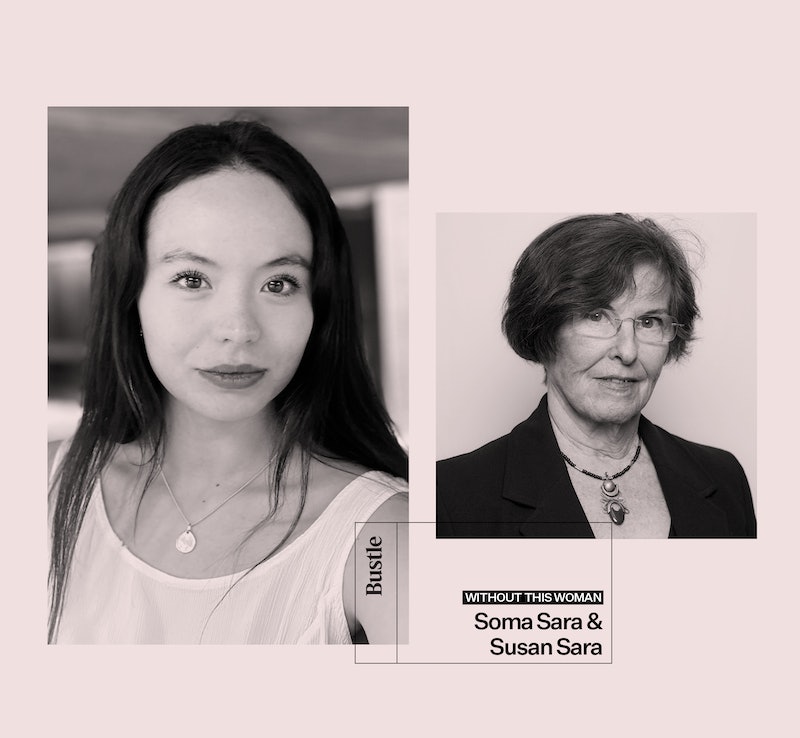 Courtesy of Soma Sara
Without This Woman

Bustle's "Without This Woman" is a series of essays honouring the women who change — and challenge — us every day. Below, Soma Sara opens up about the woman who inspired her activism.

I lived with my grandmother, Susan Sara, during the latest lockdown in Paris. It was the perfect opportunity to have in-depth conversations about everything: feminism, rape culture, and life. No holds barred. The Black Lives Matter protests had just reached a fever pitch across the world, and the movements reminded her so much of the ’60s, where she was no stranger to demonstrations.

For her whole life, she’s been a staunch radical feminist with quite left-wing values, which she’s carried with her (she has even sometimes carried her children to demos). While she is very much a traditional homemaker — from sharing tips and tricks in the kitchen, to saying “Mabel, Mabel, strong and able, take your elbows off the table” — I’ve always known my grandmother was an activist.

She was born in New York, and grew up outside New York State. She met my grandfather quite young, and had four kids in the space of four years, from the age of 20 to 24. During that time, she was studying at Sarah Lawrence College in New York, and was a member of the Students for a Democratic Society (SDS), a radical group that went along to demonstrations. It was a time of transformative change in the ’60s, with protests for civil rights, feminism, and against the Vietnam War, where protestors shared a common cause.

On reflection, she sees many parallels with racism, and sexism today. When my grandmother read the testimonies for my platform Everyone’s Invited – a movement committed to tackling rape culture – she highlighted that deeply entrenched misogyny hasn’t changed, it’s just technology that has. Social media in particular has exasperated rape culture to a whole new extreme.

Behaviours like flashing in the street, which my grandma experienced growing up, has now extended to a ‘dick pic’ online, while sexualised bullying that happens in the pub or the classroom is now also happening in group WhatsApp chats, and on TikTok. Speaking to my grandmother highlighted the inter-generational aspect of these problems, and what we need to do to disrupt it.

While my grandmother had to pause her radical feminism due to raising kids, she explained to me that she sees her career as a successful female academic as “taking up space”. She achieved a post-doctorate at Oxford — a place where she says she experienced “the most extreme misogyny’ — and started her academic career as a neuroscientist.

I’ve always been incredibly inspired by my grandmother for taking up a position of power as a woman. She was so passionate in wanting to study, and raise her children, she was determined to do it all. It’s like, wow. Her views are very entrenched in my family: equality, liberalism, and respect for women.

It’s because of my grandmother’s life’s work, because she’s been an activist in her own right, that I’m committed to continuing to call out these behaviours, and encourage people to use their voice

Following my own work as an activist, she hasn’t expressed any concerns about me being at the forefront of the conversation about rape culture. More than anything, she’s excited, and proud. (While my parents are more worried about backlash online). It’s because of my grandmother’s life’s work, because she’s been an activist in her own right, that I’m committed to continuing to call out these behaviours, and encourage people to use their voice.

As told to L’Oréal Blackett. This interview has been condensed and edited for clarity.

More like this
Gen Z Are Twice As Likely To Identify As Queer, According To New Data
By Sam Ramsden
25 Inspiring Quotes From Black Women To Celebrate Black History Month
By Kyli Rodriguez-Cayro and JR Thorpe
Here’s What TikTok's "Mascara” Trend Is *Really* About
By El Hunt
24 History-Making Black Women You Probably Didn't Learn About In School
By Ayana Lage and JR Thorpe
Get The Very Best Of Bustle/UK
Sign up for Bustle UK's twice-weekly newsletter, featuring the latest must-watch TV, moving personal stories, and expert advice on the hottest viral buys.