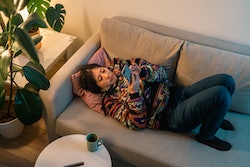 While TikTok can burn a hole in your pocket, influencing you to buy fancy hair dryer brushes, imported face oils, and 40 ounce water bottles, not all viral trends will cost you an arm and a leg. TikTokers are currently obsessed with a variety of free iPhone games that will remind you of the simpler days of Game Boy. Think games like Tetris or Frogger, or even Candy Crush: mindless and yet totally engrossing. If you’re looking for a new iPhone game app to help you while away the hours of screen time, look no further than your For You page for suggestions.

Twitch might be a more appropriate platform to immerse yourself in the world of serious gaming, but TikTok is a great place to find more low-key boredom busters that have meme-like qualities. Other games apps you’ll find trending on TikToks serve as the perfect green screen to make videos with: The more casual and uneventful a game is, the better backdrop it makes for a juicy story time video. Even if you’re not looking for gaming recommendations on TikTok, you’ll come across them on your FYP.

Temple Run came out in 2011 and was immediately one of the most popular free games to play on an iPhone or iPad. With tilts and swipes, you help an explorer race through temple ruins, collecting coins and avoiding the wrath of angry monkeys and obstacles in the path like trees or fire or water. TikTokers have realized that not only is Temple Run still fun, it’s also the perfect prompt for content. Videos that use the hashtag #TempleRun have over 450 million views on TikTok. There’s even a Temple Run challenge, which first went viral in early 2020, where two people play the game: One plays it on their phone while filming themselves, and shouts commands to the other person, who has to turn, jump, and slide as they’re prompted to do so. You then superimpose yourself over the screen in the video for the ultimate workout slash comedy clip. Genius, right?

Similar to Temple Run, Subway Surfers is a free running relic from 2012 that’s making a comeback on TikTok as a backdrop for stories told with text overlay. In one of the most popular trends, creators will take a screen recording of themselves playing the game, and then share a confessional story via text or voice over. These types of videos are tagged #subwaysurferstorytime and have over 2 billion views. Videos that use the hashtag #SubwaySurfer have over 7.4 billion views on the app, making it a top five trending game, per TikTok. The game centers around a young graffiti artist who is caught tagging a train by a police officer and his dog. The tagger is on the run in the game, trying to evade the officer while collecting coins as he goes.

If you spend any time on the For You Page, chances are you’ve scrolled past an ad for the game Two Dots. The iOS puzzle game came out in 2014 and is having a mega revival on TikTok thanks to their catchy commercials. Tap the comments in one of these ads, and you’ll find users complaining about how different the game is compared to the way it’s advertised. There is a truly surprising amount of discourse about users’ expectations of Two Dots vs. reality, which is enough to make many download it out of pure curiosity.

The app is a top trending game on the platform, and videos tagged #twodots have over 3.5 million views. In Two Dots, you connect dots with matching colors to make them disappear, sort of like Tetris. Each puzzle has an objective, like get rid of all the yellow dots in fewer than 30 moves, or get rid of 20 of each color dot in 15 moves. The satisfaction of blasting rows of dots will get you hooked on this free game, whether you stumbled across it organically, or were #influenced by the viral ads.

More like this
Why Are TikTokers Slapping Each Other With Tortillas?
By Courtney Young
What Is A “Softboy?” The TikTok Term & Aesthetic, Explained
By Courtney Young
How To Change Your Instagram Bio
By Emma Carey
Here’s Why Everyone On TikTok Is Getting “Krissed”
By Courtney Young
Get Even More From Bustle — Sign Up For The Newsletter