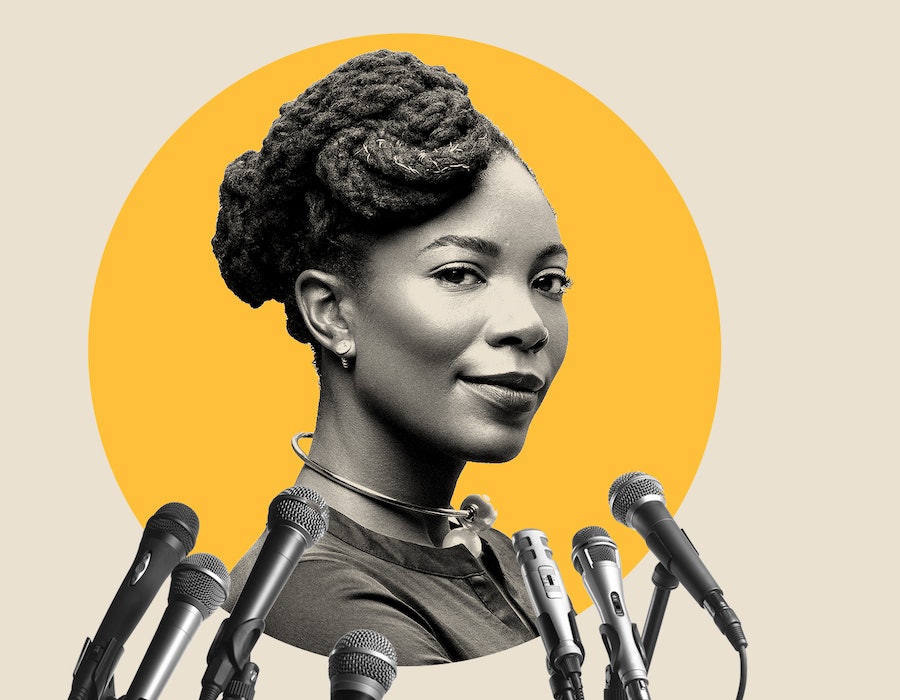 In Bustle’s Quick Question, we ask women leaders all about advice — from the best guidance they’ve ever gotten to what they're still figuring out. Here, Angelica McKinley, art director of Google Doodles, tells Bustle about the inspiration behind this year’s Juneteenth Doodle, the importance of authenticity, and the bad advice she ignores.

Angelica McKinley sees Google Doodles as one big welcome mat. As the site’s art director, McKinley has helped execute several hundred Doodles since joining the team in 2019, from an illustration of LGBTQ+ rights activist Marsha P. Johnson to an animation celebrating B.B. King’s 94th birthday. Each Doodle commemorates a different holiday, a different prominent figure, a different event, but she says it all comes back to bringing people together.

“How do you feel when you show up to the door of someone’s home? How do they greet you? Do you feel warm and seen and connected? We spend so much time online, and I want to inject more of the idea that everyone can feel included when they come to this place; I want our users to feel at home,” McKinley tells Bustle.

It’s also about striking the right chord, which is especially true for this year’s Juneteenth Doodle, designed by Detroit-based artist Rachelle Baker.

“I really want Juneteenth to be a space where we highlight Black joy, and progress, and the future, and a nod to the past,” McKinley says. “With this year’s Doodle, I hope everyone is reminded about the significant contributions Black Americans have made, as well as their continued resilience and strength.”

Below, McKinley shares which Doodle posed the biggest creative challenge, how she’s beating imposter syndrome, and the music that motivates her before important presentations.

What inspired you for this year’s Juneteenth Doodle?

I thought about what we did last year for the 155th anniversary — how do we not only celebrate Black joy and achievement, but also bring people along on this educational and historical journey? I felt what was strong about last year was the joy that people saw in the main image of the family, as well as the incorporation of a quilt, which I feel has such significance to Black communities, especially me being a Black American.

Tell me about the images of the mothers in this illustration.

I think we all can relate to our mother dressing us up and taking that time and care. But we must remember that enslaved Black Americans were not able to really dress themselves. When emancipation for some and Juneteenth for many others happened, this was the first time that Black Americans wore clothing or materials that they liked. They began to express themselves through clothing and we see that expression continue today through our hair. It’s a reminder that those little everyday moments have so much power and so much history behind them.

Which Doodle is your personal favorite so far?

Maya Angelou said, “People will forget what you said, people will forget what you did, but people will never forget how you made them feel.” That’s how I see Doodles. I want people to see them and remember a feeling, which is why I’m choosing Luther Vandross’ [70th Birthday] Doodle as my favorite. We selected “Never Too Much” because the song is so uplifting every time you hear it, which was especially important since [Derek Chauvin’s trial] had just concluded. To put something out in the world that can lift people’s spirits wasn’t a small thing for me.

On the flip side of that, which Doodle was the most challenging to execute?

[Kenyan activist] Mekatilili Wa Menza posed a challenge because there wasn’t photography [when she was alive] in the early 20th century. There are only sculptures or artist renderings of what she looked like. We did a ton of research into Kenyan features — ultimately, we wanted her to feel like that Kenyan auntie in the village. Often, when we see images of protests, there’s tension, but we wanted to give softness and serenity to her face with these very strong eyes, because she was doing what women didn’t necessarily do at that time.

How do you get pumped up before a big meeting or presentation?

Music is part of that; I love listening to Jill Scott’s “Golden” while going into a meeting and feeling like no matter what, it’s golden that I’m here, it’s golden that I get to do this as a job and express these ideas. On the days when I have to pitch, I tend to wear blue because my hair is red right now, so that red and blue combination makes me feel bright, creative, and open to possibilities.

Are there ever times you feel the opposite? Do you ever deal with imposter syndrome?

While working on last year’s Juneteenth Doodle, I felt the weight of it all. We have billions of users, so it was a culmination of needing to hit the right note due to how important this is to Black Americans but also the feeling of, “Am I the best person to execute this message?” I was constantly second-guessing myself, but what I came back to in those moments was, “Is this coming from a heartfelt place?” Because I cannot go wrong if I’m coming from a place of empathy, authenticity, and openness.

Ask for forgiveness rather than permission. As I transitioned from print to digital design, that advice helped me to think about my own creative visions and to trust in my creative depth. Sometimes people cannot see your vision — and it’s not necessarily because they’re opposed to it, but it can be hard for people to see what they haven’t seen before when they’re used to doing things a certain way. That, however, doesn’t mean you should stop trying to see your vision through.

And what’s been the worst career advice?

The whole idea of shortcuts. People are well-meaning and sometimes they’ll say, “You don’t have to learn this” or, “Maybe you shouldn’t spend so much time on this area,” but it’s important to not take the shortcut sometimes. When we take too many shortcuts, we don’t get that depth that we need. I see it so much with storytelling, especially around marginalized groups.

Your team executes hundreds of Doodles every year. What’s one way that you’ve learned to work smarter, not harder?

I’ve had to push down my perfectionistic tendencies. I’m still a detail-oriented person, but these days it’s about making sure the details aren’t overwhelming the overall message. It’s knowing that putting 20 more hours into this project without taking a break is not going to make this better. In my pursuit of bringing these stories forward, I have to remind myself that it’s not a race.