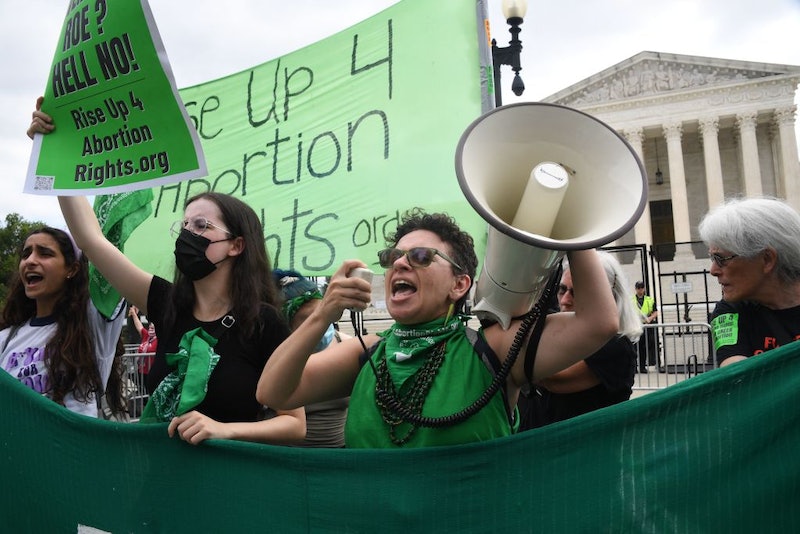 On June 24, the Supreme Court of the United States officially overturned Roe v. Wade, removing federal protections for abortion rights. This monumental decision put the power to make legislation regarding abortion in the hands of the states themselves — 26 of which now have trigger laws in place to either severely restrict or completely ban abortion altogether following the overturn of Roe.

After this decision was announced, millions of people flooded the streets that Friday evening in cities all over the country in response. Protests in major locations like New York City and Washington, D.C. were filled with handmade signs with phrases like “my body, my choice” and “keep your laws off my body” and impassioned group chants. Rather than the quintessential pink hats of past women’s marches, one trend across all of these protest events was the presence of the color green — especially green bandanas.

Thousands of protestors this weekend donned green attire, including everything from scarves to socks. While the introduction of this color was a noticeable shift from the problematic pink hats used at rallies in the past, the use of green bandanas at abortion protests is nothing new — in fact, it has a significant and meaningful history for those in Argentina, a country that’s no stranger to fighting back against oppression. Here’s what to know about the meaning and origin behind the green bandanas seen at protests.

The Meaning Behind Green Bandanas At Abortion Protests

The color green has been known for nearly two decades as an international symbol of the women’s revolution. It all started in 2003, when the Campaña Nacional por el Derecho al Aborto (National Campaign for Legal, Safe, and Free Abortion) was created in Argentina. This organization came about to fight back against the criminalization of abortion in the country, as well as to push for issues like more comprehensive sex education and wider access to contraception.

When this campaign began protesting, those who attended the rallies spread what became known as the marea verde, or the “green wave,” by wearing pañuelo verdes (aka green bandanas). Inspired by the group the Mothers of the Plaza de Mayo, who wore white scarves in protest of the disappearance of over 30,000 of their children and grandchildren under the dictatorship of Jorge Rafaél Videla, those in the Argentinian organization chose to wear green scarves to symbolize the ideals of health and hope for women. From there, the Marea Verde spread quickly across Latin America in the push for reproductive rights. Since then, the green scarves have become a universal symbol of the fight for women’s rights and feminism across the globe — which is why you’re seeing them at abortion rights protests today.