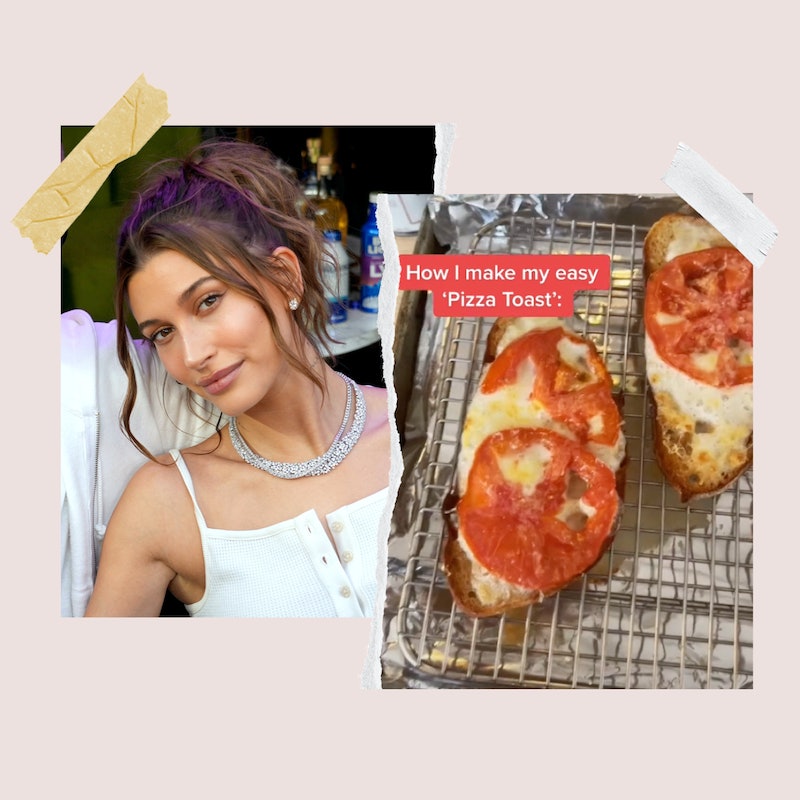 For the celebrity-obsessed, being in the know about what A-listers like to eat, drink, and cook feels like pulling back the curtain. Thanks to TikTok, celebrities like Hailey Bieber have the opportunity to get candid about their lives. In late January, the model shared her pizza toast recipe that quickly went viral — the video now has over 624,000 likes and 4.2 million views — and has inspired many iterations of the snack (the #pizzatoast tag now has over 106 million views). The best part? It’s so easy to recreate at home.

To follow Bieber’s recipe, all you’ll need is a nice loaf of sourdough bread (if you haven’t perfected your own homemade bread yet then store-bought is just fine), butter, truffle oil, burrata, tomato, lemon, olive oil, marinara sauce, oregano, red pepper flakes, and fresh parmesan. Of course, as you try it out you can decide what ingredients you may want to substitute out for others to make your own version of pizza toast.

To start, slice two pieces of sourdough and butter both sides with a drizzle of truffle oil before cooking them on a pan until they’re golden on both sides. While the bread crisps up, dress the tomatoes of your choice in olive oil, lemon juice, and a pinch of salt. Once the bread is warmed, break apart some burrata cheese on top of each slice then add the slices of marinated tomato and a bit of fresh parmesan.

Bake the topped slices of sourdough in the oven at 375 degrees for about 10 minutes or whenever the burrata is melted to your liking. To finish off the pizza toast, Bieber added a layer of warm marinara sauce, more fresh grated parmesan, oregano, and red pepper flakes for some heat. When the toast is finished, you can eat it by hand just as you would a typical piece of pizza.

Naturally, this trend has inspired many other TikTok users to try out the recipe for themselves with their own twists. Many people opted for heirloom tomatoes, used infused olive oils rather than truffle oil, or chose mozzarella instead of burrata for the cheese topping.

Creator Bria Lemirande shares her easy recipes and grocery hauls on her TikTok page @brialem and summed up the pizza toast trend perfectly. “Here’s my perspective on it. Hailey Bieber? An icon. Toast? Also an icon. And pizza? Arguably one of the best things that’s ever happened to the world,” she said, before sharing her step-by-step recreation of Bieber’s pizza toast.

Lemirande didn’t use truffle oil like the original but used a truffle-infused marinara sauce and a touch of hot honey at the end to make it her own, showing just how versatile the simple recipe can be. Similarly, @britacooks made a Bieber-inspired pizza toast using the same base ingredients and the addition of kale pesto and salami before topping the toasted bread with burrata for a final product was a heartier version of the trend.

Like all of the best internet food hacks, Bieber’s pizza toast is a great launching point for creativity. You can go ahead and follow hers to a tee or can improvise with what you already have in your pantry. Balsamic glaze, basil leaves, vodka sauce — pretty much anything is fair game. Regardless of what you may end up putting together in the kitchen, any piece of bread topped with sauce and fresh cheese is bound to be a hit, don’t you think?