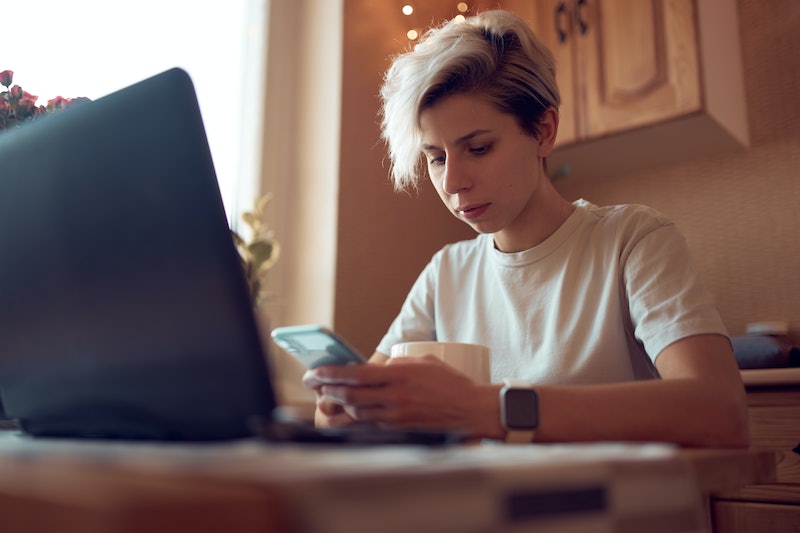 If you're more likely to use a messaging app than regular old texting, you have plenty of options to choose from: there's WhatsApp, Facebook messenger, Telegram, Signal, and plenty of others. While you’re probably familiar with WhatsApp and Facebook messenger, Signal has slowly been gaining steam as a messaging platform that takes privacy seriously. Although the chat app has been around since 2014, you may not have heard of it until very recently — but you might be wondering what Signal is and how it works.

Why Are So Many People Suddenly Using Signal?

On Oct. 4, Signal Tweeted that signups for the app were “way up,” likely thanks to a widespread outage on Facebook-owned platforms like WhatsApp. Until around noonish on Monday, WhatsApp was used by 2 billion people monthly, per Statista; with the service down for much of the day, many people scrambled to get in touch with family and friends abroad, where WhatsApp is more commonly relied on than other messaging apps. (Signal itself went through an outage a week prior; their Tweet continued, “[we] wish the best for the engineers working on bringing back service on other platforms #mondays.”)

The Facebook outage wasn’t the first time people decided to see what Signal was all about. According to CNBC, 7.1 million people downloaded Signal and 5.6 million people downloaded Telegram in the few days after Trump-supporting insurrectionists stormed the Capitol building on Jan. 6. The aftermath of the attempted coup also saw thousands of accounts, including Trump's, purged from Twitter and other social media sites, accused of inciting the attack. Signal has been the go-to app of journalists and activists for years because of how it protects user privacy; Signal downloads also spiked right after the Nov. 2016 election.

This momentum may have been set in motion by earlier events. On Jan. 4, 2021, Facebook issued an update to WhatsApp's privacy policies, stating that users will have to agree to share their data with Facebook (though individual messages will still be end-to-end encrypted). Per CNBC, following the announcement and the insurrection, Tesla founder Elon Musk tweeted "Use Signal" to his 42 million followers. Though Facebook later clarified that the new privacy standards will impact business messages but not messages between your family and friends, these factors are a perfect recipe for wanting to migrate to a nonprofit-developed messaging app like Signal.

Why? Signal is encrypted from end to end, meaning that only the sender and recipient will have access to messages. The free app makes money through donations, not by selling your data. That adds up to actual privacy in your communications. On other apps, providers can read your messages and emails, but end-to-end encryption keeps your data private — hackers can't get at it, nor can providers use your personal emails to advertise to you. In other words, when you and your bestie make plans to meet up before a protest, it's just between the two of you.

How Does Signal Work?

Actually using the Signal app is pretty simple. You can download it onto your iPhone, Android, or desktop for free to start messaging your Signal-having friends. Sign up with just your phone number, and the app can then scan through your contacts to see which numbers in your phone book are also Signal users. (That's optional, though.)

Then, you can use the app on either your phone or computer. If you start a conversation on your phone, you can use a QR code to log in on your laptop and pick it up there — but you won't be able to see the previous messages (the ones you sent from your phone). Signal messages are stored on your actual device, not in the magical digital space of the app. That's because Signal uses an open-source protocol to encrypt everything from texts to videos, voice memos to photos. In tech-speak, that means you can check out the source code keeping your Signal messages private for yourself on GitHub. In non-tech speak, it means that your messages are supposed to remain your messages — as long as you're the only person with access to your device, you're the only one who'll see them.

What Features Does Signal Have?

Like on WhatsApp, you can @mention specific people on Signal to tell them "no, really, check this thread." Also like on WhatsApp, you can reply individually to a particular message whenever convos get unwieldy. Pressed "send" a little too soon? You can choose a "delete for everyone" option by highlighting the "oops" message and pressing the necessary button. If you're on your desktop, click those three little dots to find the "delete for everyone" option.

If you want to up the privacy even more, you can set your messages to delete themselves after a set period of time (between five seconds and a week). A little clock will show up next to it to countdown to remind you of the setting you chose. Speaking of privacy, you know that anxious feeling you get when you open a message and aren't prepared to respond to it... but now everyone can see that you read it? You can mark messages as unread on Signal by selecting and holding a chat, going to Menu, and selecting the nifty "mark as unread" option.

As of December 2020, you can also turn a group chat into a group video call on Signal with up to eight friends by pressing the little video button at the top of the screen. But you can't just be added to group chats willy nilly — you have to accept being invited to group chats, unlike in WhatsApp (where you're just suddenly in a new group).

Whether you're the leader of your friend group in the Signal migration or the last on board, at least you'll know how to use the darn thing (or how to help your mom to figure it out).

This article was originally published on Jan. 12, 2021