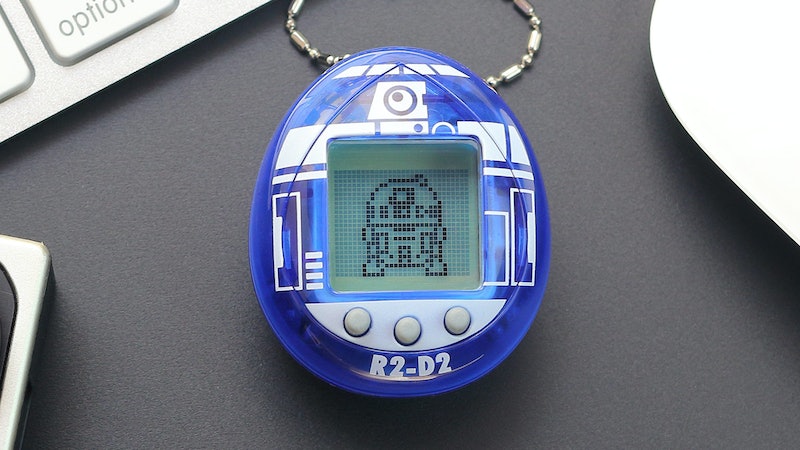 Listen up, ‘90s kids. One of the most-loved toys from our childhood is making a comeback. Tamagotchi has teamed up with the guys at Star Wars to release a retro-style R2-D2 Tamagotchi digital pet in celebration of their 25th anniversary and the special edition toy will be on sale later this year.

If somehow you missed out on the Tamagotchi craze as a child, here’s a quick rundown on what to expect. Tamagotchis are little digital pets that players need to feed, play with, and clean up after. And while that may sound simple enough, caring for a Tamagotchi can turn mega stressful, so watch out.

While the old-school Tamagotchis were animals, this new collaboration with the Disney franchise has stepped things up a notch by reinventing the famous game with an R2-D2 droid. You can help your droid learn 19 different skills including piloting a spacecraft and how to interact with other Star Wars characters, including Yoda, C-3PO and Boba Fett. There are nine mini-games to unlock that feature even more Star Wars characters, such as Chewbacca, the Tusken Raiders, and the Ewoks, and you’ll also have to train your droid to take down the Empire’s Sandtroopers.

And if you sucked at looking after your Tamagotchi pet as a kid, fear not, because R2-D2 requires a little less TLC. You don’t need to feed it, and unlike the Tamagotchis of the ’90s, you won’t wake up to find that R2-D2 has left piles of digital poop all over the screen. However, it will need charging as well as regular cleaning. On Amazon, the manufacturer Bandai America Inc shared that owners will “still need to take care & clean it when it is covered by dust.” Still, that’s better than poop.

Can’t wait to get your hands on the little gizmo? You can pre-order a blue or white version of the R2-D2 Tamagotchi ahead of the November 30 2021 release date. The device may cost £19.99, but the nostalgia is priceless.