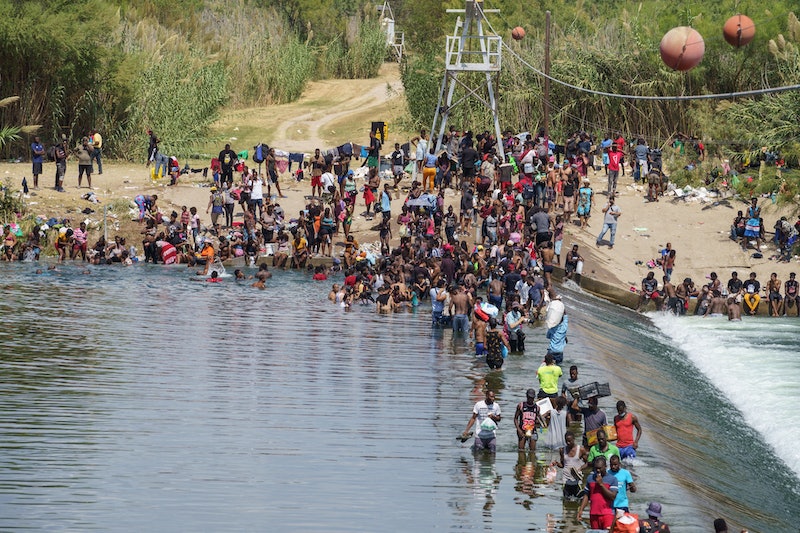 On Saturday, Sept. 18, the Biden administration announced that it would begin deporting migrants from Haiti who had made their way to the border of Texas and Mexico. Thousands of people have traveled to the U.S. from Haiti following the July assassination of President Jovenel Moïse and a 7.2 magnitude earthquake just weeks later, which further destabilized conditions in the country. Even before this, in May, Haitians were authorized to seek Temporary Protected Status for 18 months in recognition of the “serious security concerns” in the country, per a statement from the Department of Homeland Security. But this doesn’t apply to people who arrive after July 29, who are being deported under a Trump-era policy that organizations like Human Rights Watch say is illegal.

"This is cruel, un-American, and inarticulable,” Marleine Bastien, executive director of the Miami-based Family Action Network Movement and an immigrant from Haiti herself, told the Washington Post. “I am getting so many calls from people asking why? What have Haitians ever done to America? All we have done is try to help America, and we are treated like this?”

Many are wondering how to help Haitian migrants and asylum seekers as anger at the U.S.’ actions grows. Images showing Border Patrol agents whipping migrants on horseback horrified onlookers; the Department of Homeland Security tweeted that it will investigate the incident, adding that “DHS does not tolerate the abuse of migrants in our custody.” The situation has also prompted the U.S. Special Envoy for Haiti, Daniel Foote, to resign, citing the U.S.'s "inhumane, counterproductive decision to deport thousands of Haitian refugees."

“The collapsed state is unable to provide security or basic services, and more refugees will fuel further desperation and crime,” Foote’s letter reads. “Surging migration to our borders will only grow as we add to Haiti’s unacceptable misery.”

The most directly impactful way to help Haitian migrants is by volunteering with or donating to local organizations that work with Haitian refugees on the ground. One of these organizations is Houston Haitians United, a non-profit that serves the Haitian community in Houston. Currently, HHU is in specific need of nurses who can administer COVID-19 tests, cooks who can make Haitian food, Haitian Creole translators, barbers, and hairstylists, per an Instagram post. The organization also welcomes donations from those who are not based in the Houston area.

You can also donate to Black Freedom Factory, a San Antonio, Texas, organization that is partnering with the Val Verde Border Humanitarian Coalition to coordinate food and supplies for the Haitian migrants. Executive Director Kimiya Factory told local affiliate KENS 5 that the organization needs water, diapers, non-perishable food items, and menstrual and other hygiene products. Black Freedom Factory is also seeking blankets, towels, socks, and undergarments, and plans to head to the border on Sept. 27 to distribute supplies to refugees, according to KENS 5.

Another organization to donate to is Haitian Bridge Alliance, a group of Haitian and Haitian-Amerian advocates that are helping feed, clothe, transport, and shelter migrants on the ground in Del Rio, Texas. Through organizing and advocacy, Haitian Bridge Alliance focuses on providing Black migrants, the Haitian community, women & girls, LGBTQA+ people, survivors of torture and other human rights abuses with humanitarian assistance. They coordinate rapid response teams to help Black immigrants and asylum seekers from the Caribbean and Africa at the U.S.-Mexico border, in U.S. detention, and during U.S. immigration proceedings. (They also offer a useful script for calling your representatives, too.)