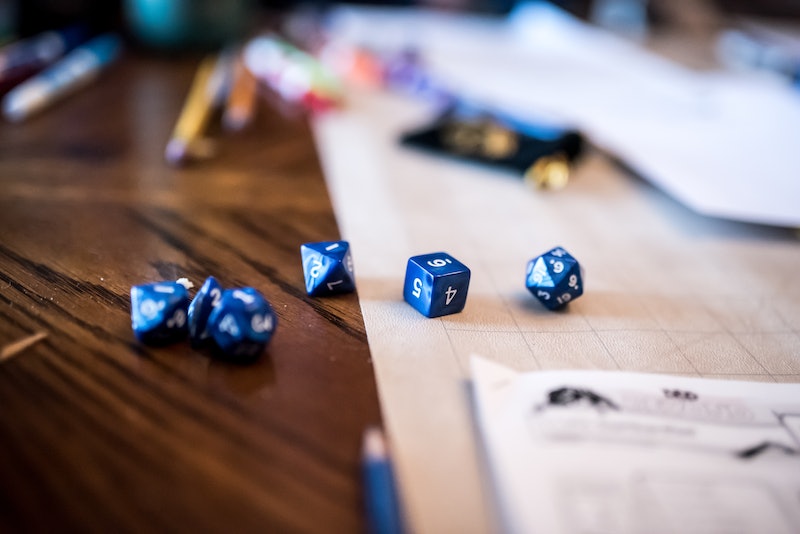 Role-playing game Dungeons & Dragons, or D&D, has had a renaissance during the pandemic, with new fans flocking to the old-school game in record numbers; online resource D&D Beyond told Bustle in July that it had seen a 50% increase in new registrations every month. If you want to see what the Stranger Things kids are on about, but can't get together with friends for an in-person game, you can play Dungeons & Dragons online with ease, provided you have a stable internet connection. If you've never had the opportunity to try it out, now's your chance.

"This year, we've had to shift all of our games online, which was a bit of a shock after piling friends around the table," Charlie, 34, a longtime Dungeon Master, tells Bustle. "I was worried that moving online would involve shelling out a load of money, but we've played for months without paying anything."

D&D is, at its core, a pretty simple game: you play a character, go on a quest with other characters, and roll dice to see whether your actions — shooting an arrow, charming a wolf queen — succeed or not. It's all controlled by a Dungeon Master, or DM, who guides you through your adventures, and can use either a pre-prepared quest or make up one of their own. The D&D universe can seem really overwhelming for a first-timer, but it's easier to play it online than you might think.

"D&D takes place entirely in your imagination — no board or pieces necessary," Ray Winninger, executive producer of Dungeons & Dragons at Wizards of the Coast, tells Bustle. "Modern tools like Zoom or Skype make it easy to play online."

If you want to learn the rules for an online game of D&D, you can get all the information you need from D&D Beyond. It's a one-stop free shop for you to learn the ropes, create characters, and look up monsters. Start with their New Player Guide and the Basic Rules. There isn't an official Dungeons & Dragons online playing site, but there are many places that provide adventures for you to play through. Wizards Of The Coast has a lot of material for playing Dungeons & Dragons remotely during the pandemic, including free adventure guides and cheap quests with all characters and monsters included. Reddit is also an excellent place to look for free quests to run with your friends.

These stories often come with ready-made characters for you to play, so you don't have to worry about constructing one from scratch. If you feel on top of the rules — or just really want to be an evil elf called Dr. Bubbles — you can also make your own character; D&D Beyond has a tutorial to take you through their character builder, step by step.

You've got the rules and the story — now you just need a place to play. If you're starting a quest with your mates, you might want to find a virtual tabletop, which helps you visualize what's happening. Roll20, which is free and very popular, allows players and DMs to video chat while playing, all while moving their characters around maps using simple click-and-drag. Astral Tabletop is also a highly-rated free place to play. No dice, no problem; Google will roll them for you. Type "roll dice" into the search bar and a handy graphic will come up with a variety of dice, with four, six, eight, 10, 12, or 20 sides; click the one you need, and it'll randomly generate a number.

"We use Zoom and Roll20, but I know people play by all sorts of formats: Discord, chat rooms and even forums," Charlie says. Winninger says his favorite tool is actually PowerPoint, where he makes and shares slideshows of borrowed art and maps to help set the scene for his players. As long as you can communicate effectively, it's a cinch to play.

Don't have anybody in your life who wants to run around seducing dragons with you? Roll20 has a matchmaking service where you can look for other groups to join, and D&D Beyond has a discussion forum for the same purpose. Your local games store might also run a virtual games night. And if you find some dedicated co-adventurers, you might even get together in the real world for some ogre-fighting action — post vaccine, of course.