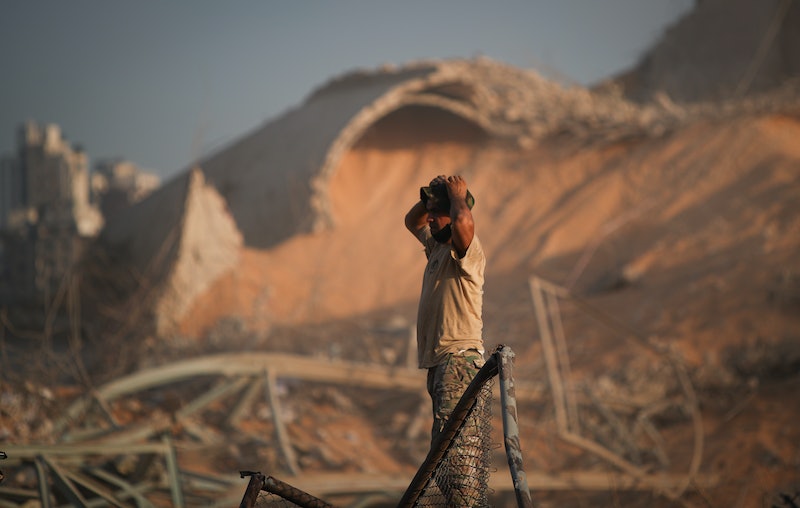 In October 2019, protests erupted throughout Lebanon after its government proposed to place taxes on petrol, tobacco, and WhatsApp. By this point, the Lebanese economy was already in crisis following years of debt, corruption, and bankruptcy that dates as far back as 1990, when the 15-year civil war in the country ended.

The people of Lebanon took to the streets demanding political change, which eventually led to the resignation of then president Saad Hariri and his government, throwing the country into a political crisis. The economic situation continued to deteriorate as the national currency depreciated in value and inflation increased. This led to banks imposing restrictions on withdrawals, meaning citizens have been unable to access their wages and savings.

The economic crisis worsened as the coronavirus pandemic took hold in 2020, followed by the devastating explosion in Lebanon’s capital Beirut on Aug. 4, which has been described by experts as “one of the biggest non-nuclear explosions in history”.

Following the Beirut explosion, the crisis has worsened exponentially. According to The New York Times, the price of consumer goods has “nearly quadrupled”, leaving people with barely any access to necessities like food and medicine. Some healthcare companies have run out of medicines “needed to treat cancer and heart disease” as a result of the country being unable to procure products from foreign importers.

Fuel has become scarce in Lebanon due to a lack of foreign currency to pay energy suppliers, leading to the closure of power plants, hospitals, and water pumping stations. As a result, civilians have been left without electricity and clean water, as well as the ability to heat or air-condition their homes. And those who want to leave are stuck as there’s no fuel available to fill their vehicles.

The ongoing crisis has left almost half of Lebanon’s population living in poverty, and has prompted more mass protests to remove the political elite “accused of corruption, mismanagement, and negligence,” per BBC News.

“This is a horrific reality for the people of my country who have been pushed to the edge of their sanity and patience,” Lebanese citizen Rita Dahdah Fawaz wrote on Instagram. “So many are unlucky enough to be held hostage in Lebanon because our politicians took away all their money, dreams, and basic needs.”

She continued: “Nothing will change if we don’t change who’s in charge. And this starts with the Lebanese putting their differences and prejudices aside, uniting, and putting their country and their people before their corrupt leaders.”

Charities, organisations, and citizens who have the means to help are providing food, water, and medicine to those in need. There are dozens of campaigns and fundraisers aiding their efforts, some of which are listed below:

Beit el Baraka aims to assist Lebanese citizens with the increasing cost of living by providing access to food, medical services, social security, retirement pensions, and education, as well as other support.

This GoFundMe campaign organised by Lebanese expat Jessica Kahawaty is set up to distribute the money raised among non-governmental organisations (NGOs) in Lebanon, individual families, and students who are struggling to obtain food, water, and medicine.

Following the Beirut explosion, the Lebanese Red Cross has set up a long-term response for the people of the city, providing shelters and distributing kits of ready meals, food parcels, and hygiene products.

It has also been providing direct cash support to nearly 10,000 families, and has so far helped over 200,000 people in the area.

Offrejoie has been instrumental in helping with the aftermath of the Beirut explosion, and immediately set up an emergency rehabilitation programme in the four most severely affected neighbourhoods.

Since August 2020, the charity has been working on more than 300 apartments, and is aiming to assist more than 350 families to return to normal life. In April 2020, Offrejoie also launched a food bank campaign to help people across the country, which has since reached over 4,000 families.

Lebanon is home to over 1 million Syrian refugees, and Médecins du Monde been an integral part of supporting their medical needs, supporting primary healthcare centres, and mobile clinics in areas where refugees reside.

Founded during the civil war in Lebanon, Caritas provides curative and preventative healthcare for the country’s citizens, as well as social support for underprivileged children and refugees.

The Lebanese Food Bank aims to “alleviate hunger and help the environment” by collecting food that may otherwise go to waste, and providing it to the citizens and charities that need it most.

2. Write to your local MP

Write to your local MP, expressing how you feel and asking them to take action as your representative, and raise the crisis in Lebanon in the House of Commons. Advice on how to do that can be found, here.

There are various petitions you can sign to show your support for Lebanon on Change.org, including one that is aiming for frequent coverage of the crisis in international press, and another that aims to pressure the Lebanese Ministry of Foreign Affairs to provide aid to its citizens during the pandemic.

You can also amplify the voices of Lebanese citizens, experts, and share resources on how to help via social media.