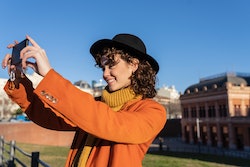 While the ghost app might not get as much attention these days, Snapchat seems to have started one of the hottest social media trends of the 21st-century when it rolled out its vanishing story feature in 2013. It wasn’t long before Instagram and Facebook followed suit in 2017, introducing their own 24-hour photo and video-posting features. Now, a new chapter in the story begins, as TikTok officially begins rolling out its own story feature.

According to The Verge, TikTok first began testing out their story feature in August 2021. In many ways, the feature is the same as its predecessors. You post a photo or video to your story for others to view, and then, in 24 hours, it vanishes. There are, however, a few distinct twists in TikTok’s story feature. For one, users will be able to comment on stories — unlike apps like Facebook and Instagram, where users can only reply privately via DMs. Also, while you may be able to scroll through your story viewers checking to see if you’ve caught your Instagram admirer’s eyes, TikTok will not allow users to see who viewed their story — only how many people viewed it.

Though the feature has been in a beta phase since 2021, TechCrunch reports that the testing phase of TikTok stories expanded as of Mar. 17, making the feature available to many more users to try out. If you’re ready to see what TikTok is bringing to the story game, read on.

To post a story on TikTok, you’ll want to click the same “Post” button you’d use for a normal TikTok. (Located in the center of the tab at the bottom of your screen, the icon looks like a plus sign.) DexterTo reports that you can then scroll to a “Quick” camera mode, which will allow you to post a photo or video to your TikTok story.

Distractify reports that most of the editing features of TikTok video stories are the same as TikTok videos — such as using special effects on your story, posting a story as a reply to a comment, or adding a TikTok sound to your story.

How To See A TikTok Story

Viewing a TikTok story is fairly similar to an Instagram story. If you’d like to see a specific person’s TikTok story, head to their profile and tap on their profile picture. TechCrunch also reports that TikTok stories may also appear on the For You page (again, just for 24 hours), but only people who have access to post TikTok stories themselves will be able to see them.

Why Don’t I Have TikTok Stories?

If you’re updated your TikTok app and still don’t have access to stories, don’t fret. It’s likely that the feature will be expanded to more users in the coming months. Just like the waning life of the 24-hour TikTok story, this, too, shall pass.