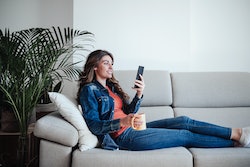 Allow me to paint a portrait of a simpler time. The year is 2012, maybe 2013. Your iPhone 5 opens with a simple thumbprint scan. Your Instagram feed shows you exactly the photos the accounts you followed posted in the order that they posted them. But nothing gold can stay, can it? In 2016, the social media platform switched to a non-chronological feed, where you were served photos based on how likely you were to engage with them. Though users continuously complained about the change, over the years, it seemed like the chronological Instagram feed was a thing of the past.

Then, in January, Instagram announced that the app would bring back time-based feeds, along with a way to see posts just from your favorite creators. The social media platform began testing these feeds earlier this year, and rolled them out to all users on March 23. Now, you can choose between three Instagram feed views: Home, Following, and Favorites, where the latter two will show posts in order.

“It’s important to me that people feel good about the time that they spend in the app,” Mosseri said in a January video statement, announcing the test of the new feeds. “I think giving people ways to shape Instagram into what’s best for them is one of the best ways to pursue that goal.” An email from Instagram noted that people tend to be satisfied with a ranked feed, meaning one based on engagement, and therefore they would not make chronological feeds the default.

There are now three options for how your Instagram timeline is shown to you. The first, called Home, is essentially how the app has been structured for the last few years: You’ll see content based on whether Instagram’s algorithms think you’ll be interested in it. This option will also include suggested or recommended posts, which Mosseri noted in his January announcement will become more common over time.

The second option is called Favorites. Like Close Friends, Favorites will be a list of up to 50 accounts you don’t want to miss anything from. You might add your actual IRL friends to this list, or the cast of a reality TV show you’re currently obsessed with. (No one gets notified if you add or remove them from your Favorites.) Anyone you add to your Favorites list will also show up earlier in your timeline, per an email from Instagram.

The third option is called Following. It will just be the posts from the accounts that you follow, in the order that they’re posted. That’s it! A return to the halcyon days of the chronological Instagram feed.

The latest change comes as Instagram has been rolling out more ways to modify how you use the app. In December, the app launched a “Take A Break” feature that sends you notifications when you’ve been scrolling longer than you might have meant to.

The original chronological Instagram feed was scrapped in 2016, with the intent being to make user’s time spent on the app better spent. (Let’s face it — you don’t really want to see every post from your middle school best friend, do you?) But after the change, users complained about seeing photos that weren’t exactly timely. After receiving feedback on that version of the timeline, in 2018 Instagram released an app update that prioritized newer posts first, though they still showed up in an order based on the algorithm.

Starting on March 23, all Instagram users should be able to change their Instagram timeline view to Home, Following, or Favorites (and switch between them as they please). Simply tap Home and select your desired feed view from the drop down menu on the upper left. This is also where you’ll be able to add accounts to your Favorites.

Instagram rolled out this app change to all users on March 23. In order to change your Instagram feed views, you’ll want to make sure your app is up to date. You can do so by going to your App Store for iPhone or Google Play Store for Android and checking your pending app updates. You can also close out of the app or try restarting your phone to troubleshoot. If all else fails, be patient; the change should roll out to you soon enough.