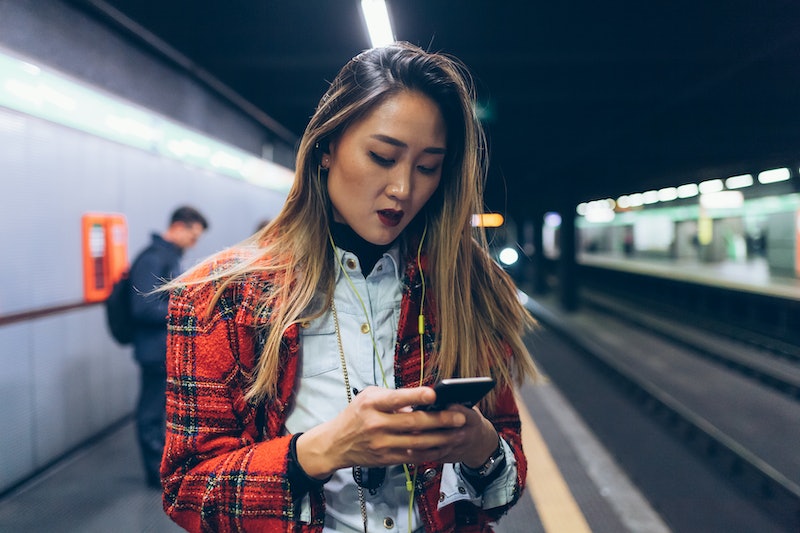 As far as breakups are concerned, there's nothing more infuriating than getting broken up with over text. It feels like your partner is taking the coward's way out, and it leaves you with basically no sense of closure, which can make it super difficult to move on. But even though it should be common sense that sending a breakup text is a huge dating no-no, recent data from text marketing software company SimpleTexting reveals just how common it really is.

In their 2018 survey of 500 millennials, 57% admitted to breaking up with someone over text message, and a whopping 69% said they've been on the receiving end of a breakup text before. Yep, you read that right: the majority of those surveyed said that a brief, impersonal message had been the demise of at least one of their relationships.

Generally, experts recommend meeting up in person, if possible, or at the very least making a phone call. But when you're the one who wants to end a relationship, it becomes easier to see the plus side of a breakup text. According to Carolyn Cole, LCPC, LMFT, NCC, a licensed marriage and family therapist, breaking up with someone tends to cause a lot of anxiety. You might worry that the other person will cry, try to talk you out of it, or even become angry, she says. And sending a quick breakup text is a surefire way to avoid all of that.

For better or worse, technology has changed the way we date and communicate, and there's a lot to consider on both sides of the court. Here's the scoop on breaking up via text, from all perspectives, according to experts.

Why So Many Millennials Get Dumped Via Text

Let's start off by talking more about why being dumped via text is so common. It feels super impersonal, leaves you unable to have a real conversation about what went wrong in the relationship, and experts the world over agree it's cold as ice. So why do we do it anyway? According to Jonathan Bennett, a certified counselor and relationship expert at Double Trust Dating, it has a lot to do with the way social media and online dating have fostered a lack of connectedness.

"People used to date within their social and community circles so it created an incentive to avoid bad behavior (like breaking up over text)," he tells Bustle. "After all, no one wanted to be known as 'that person' within a group. But, given the impersonal nature of dating today, it’s very unlikely breaking up over text will result in any social consequences. So, people go with their impulse to take the easy way out, which is breaking up over text."

Simply put, it's a lot less confrontational than telling someone face-to-face that things aren't working out. It's faster, easier, and spares you the aforementioned anxiety. And because the person's reaction remains a mystery — and, you're not likely to ever see or hear from them again — it can be hard to talk yourself out of doing it.

You never really know what's going on in someone's head when they send a breakup text, but there are a few things it could reveal about their personality and how they operate in relationships. As Dr. Ramani Durvasula, Ph.D., a licensed clinical psychologist, tells Bustle, it may mean they're cowardly, lazy, or sloppy when it comes to how they interact with their partners. They may be indifferent to the emotions of others, or so fearful of emotions that they cannot face or manage them.

"It may also speak to guilt and shame — and a way to circumvent those uncomfortable feelings by not having to face up to the breakup-ee," she says. "It also speaks to bad relationship hygiene," meaning they might not have the skills necessary to communicate effectively or contribute to a healthy relationship.

When you have the option of taking the easy way out, it can be hard to resist, but if your goal is to eventually have a healthy, happy relationship, it's important that you learn to have difficult conversations in person, even though it might be painful. Speaking of which...

How Sending A Breakup Text Negatively Impacts The Sender

The prevalence of the breakup text is a prime example of how technology has, in some ways, actually impeded our ability or desire to communicate maturely. So even though the focus of a breakup text is often on the receiver, the sender is doing just as much damage to themselves.

If sending breakups texts becomes a habit, they're never going to see the impact of their actions, David Grammer, MA, LMFT, a licensed marriage and family therapist, tells Bustle. They won't get to witness their partner going through shock, sadness, or anger, and that can increase the likelihood of being impulsive, hurtful, or dismissive in the future.

While difficult and uncomfortable in the moment, a more heartfelt breakup — where you sit down with your partner, explain what went wrong, and give them a chance to ask questions and gain closure — is an important part of relationships.

Is It Ever OK To Break Up With Someone Over Text?

It should go without saying that if you're in a long-term relationship, breaking up with your partner over text is extremely unfair and disrespectful — and should be avoided at all costs. Both of you deserve the opportunity to speak your piece before parting ways, and be granted the dignity of a face-to-face goodbye. And again, the only way to do that is by having an actual conversation, either on the phone or in person.

That being said, there are a few instances in which a breakup text is an acceptable choice. For example, "If you feel that having this conversation in person will put you in danger in any way or that the other person will attempt something manipulative, text can be safest and more comfortable," Dr. Racine Henry, Ph.D., LMFT, a licensed marriage and family therapist, tells Bustle. Choose this option if you're leaving a toxic relationship, or if things have gotten to the point where you can no longer effectively communicate.

Sending a breakup text is also OK if you were only dating someone for a short period of time. If you went on one or two dates, it'll be the easiest way to let them know you're no longer interested. This option makes more sense than inviting them out in public and saying it to their face, which would be a waste of everyone's time. (Oh, and it's obviously way kinder than ghosting.)

In some ways, a breakup text can be viewed as a kindness, since it gives the breakup-ee a chance to experience their initial emotions — anger, sadness, shock, etc. — privately. And as Henry says, you can always follow up in person or over the phone, once they've cooled off.

How To Deal If You Get Dumped Over Text

Now let's look at the reverse scenario. If you're blindsided by a breakup text, you'll likely be hit with a slough of emotions. "It may elicit anger and hurt," Cole says, since you'll feel like your partner is being a "coward" or "taking the easy way out." There might also be a sense of abandonment and resentment, and it can take some time to work through.

You can, however, enjoy the one luxury of a breakup text: that you don't have to respond right away. "Maybe you want to put the text away for a day or two until you can collect your thoughts and decide what you want to say in response," Henry says. You might even realize there's nothing more that needs to be said.

Either way, Henry recommends deleting the breakup texts so you don't read them over and over again, since that isn't good for your psyche. From there, reach out to loved ones and friends, or even your therapist, to help you begin the process of accepting that the relationship has ended, Henry says, as well as how it ended.

"Think about what you need to heal and start doing those things immediately," she says. "Take some time to wallow and then start taking care of you." Allow yourself plenty of space to grieve the relationship, then look forward to a future where you find a partner who will treat you with respect and dignity — even during a breakup.

More like this
Cookie Jarring Is The Dating Term You Need To Know
By Sophie McEvoy
Is It A Rebound Relationship Or The Real Thing?
By Carolyn Steber and Lexi Inks
Are Quality Time & Physical Touch Love Languages Compatible?
By Lexi Inks
12 Ways You're Sabotaging Your Love Life
By Teresa Newsome and Lexi Inks
Get Even More From Bustle — Sign Up For The Newsletter

This article was originally published on Jan. 9, 2018