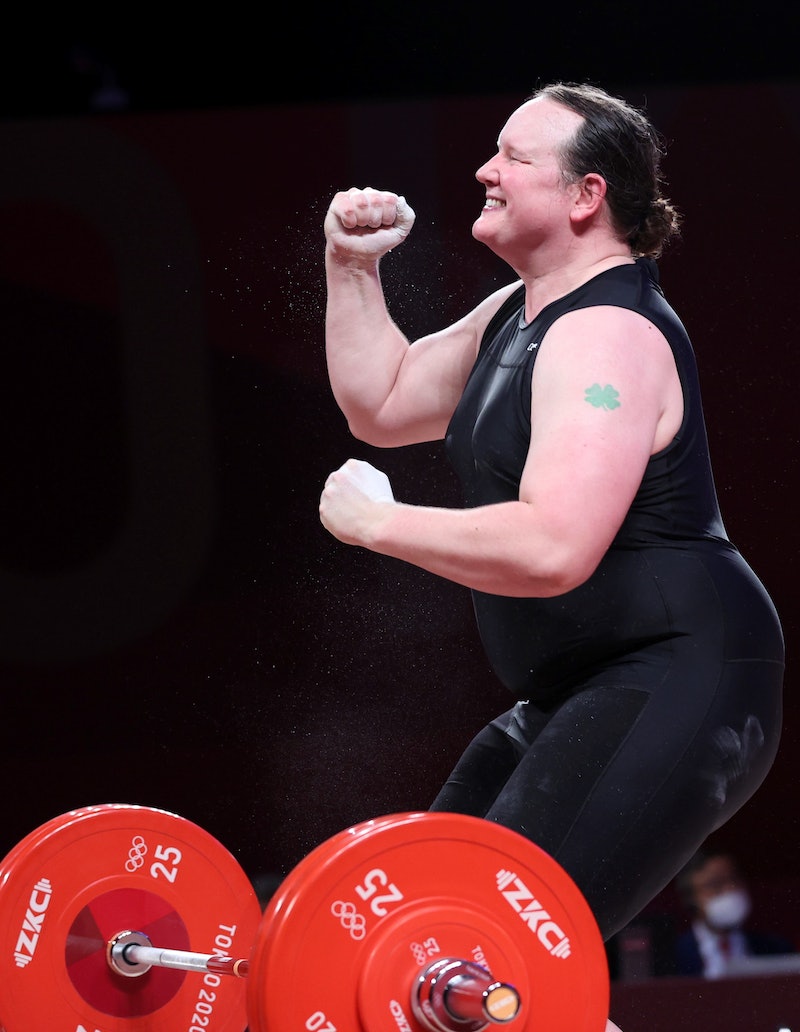 As the Olympics enters its final week, the games have a lot to be proud of. At least 121 openly LGBTQ+ Olympians are competing, per Them, including two transgender athletes. Elite weightlifter Laurel Hubbard is one of them. And while she may have gone oh-for-three in her performance at the 2021 Olympics in Tokyo, Hubbard still has a lot to celebrate.

Who Is Laurel Hubbard?

At 43 years old, Hubbard is one of the older athletes competing in Tokyo — and she’s also the first openly trans woman to compete in the Olympics. In a 2017 interview with New Zealand public broadcast service RNZ, Hubbard said that she started weightlifting at a young age because it’s an “archetypally male” sport. “I thought perhaps if I tried something that was so masculine perhaps that's what I'd become,” the Auckland native explained.

Hubbard had a lot of success competing before she transitioned — at age 20, she set a men’s national junior record by lifting over 660 pounds total in competition. Still, Hubbard left the sport three years later. As she told RNZ, “the pressure of trying to fit into a world that perhaps wasn't really set up for people like myself” was too great.

But by 2017 — about five years after Hubbard started transitioning hormonally — organizations like the International Olympics Committee had begun to allow trans athletes to compete. This inclusion set the stage for Hubbard to participate in the world championships with other women.

Hubbard has a seasoned history of weightlifting wins. In 2017, her career was launched into the public eye when she won two silver medals at the IWF (International Weightlifting Federation) World Weightlifting Championships. She earned one of the medals for lifting over 606 pounds for her overall total across the two weightlifting moves (the snatch and the clean and jerk). She also won second place for the snatch, in which she hoisted over 273 pounds above her head.

Although a 2018 elbow injury had Hubbard considering retirement, she healed well enough to rank sixth overall at the 2019 IWF Worlds and win gold at the 2019 Pacific Games. These successes paved the way for her qualification for the Tokyo Olympic games.

What Was Laurel Hubbard’s Record At The 2021 Olympics?

Weightlifting is a pretty technical sport to watch. In these events, you need to successfully complete at least one of three snatches — a move where you lift a barbell from the ground all the way over your head in one fluid motion — in order to move on in the competition. Hubbard’s second lift looked good to many spectators, but a split decision from the judges ruled that she didn’t stabilize the lift over her head enough for it to count as a “good” lift. The ruling eliminated her from the competition.

In a statement released soon after by the Olympic New Zealand team, Hubbard said: “My performance wasn't what I had hoped but I'm humbled by the support I've received from so many people around New Zealand... Thank you to the IOC [International Olympics Committee] for living up to the Olympic values and showing that sport is for all and that weightlifting can be done by all types of people.”

JayCee Cooper, a TGNCQ powerlifter and co-director of strength sports advocacy and fundraising organization Pull for Pride, tweeted her support for Hubbard after her performance at the Games:

Regardless of how these games went, whatever is coming next for Hubbard, her career so far indicates that it’ll be great.

More like this
11 Super Bowl Instagram Captions To Use On Game Day — Even If You Don’t Like Sports
By Alexis Morillo
25 Inspiring Quotes From Black Women To Celebrate Black History Month
By Kyli Rodriguez-Cayro and JR Thorpe
24 History-Making Black Women You Probably Didn't Learn About In School
By Ayana Lage and JR Thorpe
19 Instagram Captions For Celebrating Black History Month
By Ayana Lage
Get Even More From Bustle — Sign Up For The Newsletter
From hair trends to relationship advice, our daily newsletter has everything you need to sound like a person who’s on TikTok, even if you aren’t.