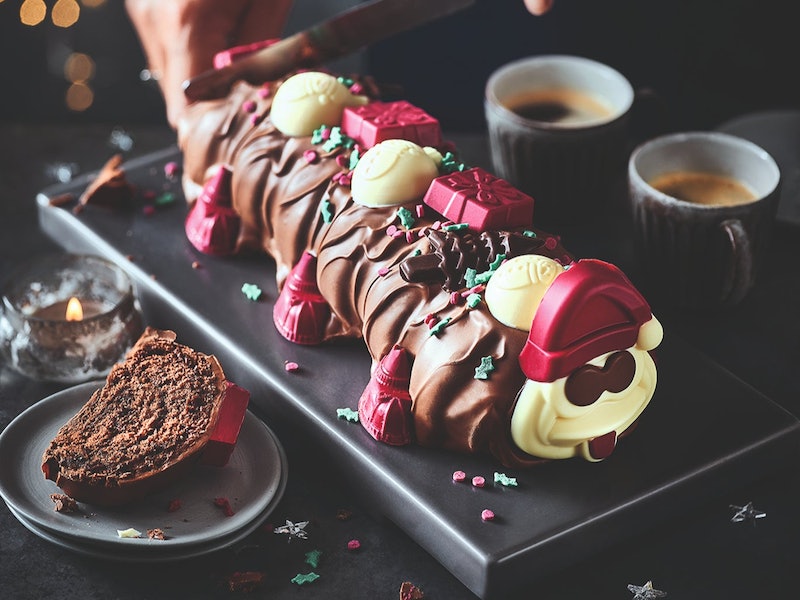 As the Christmas season draws ever closer, supermarkets across the UK continue to unveil their expanding collections of festive treats. This year, foodies can look forward to a yuletide twist on an office birthday classic, because M&S have released a festive Colin the Caterpillar cake.

Yes, the legendary chocolate-covered sponge roll has been given a seasonal makeover, complete with edible presents and decorations, rich chocolate buttercream, and an adorable miniature Santa hat worn by Colin himself. The special-edition cake, which hits shelves on December 22, will set you back £10. Its arrival comes shortly after M&S celebrated the famous cake's 30th anniversary with a spectacular Colin The Caterpillar trifle recipe.

“Everyone’s favourite caterpillar has gone all seasonal with a makeover, including a festive Santa hat and edible decorations,” Marks & Spencer said in a description of the dessert, which debuts alongside a brand new range of Percy Pig-inspired mince pies.

The Percy Pig “Percymas” pies will be available in stores from October 6 and are intended as a mouth-watering alternative to the traditional mince pie. "These fun alternative mince pies combine tasty shortcrust pastry with a fruity filling and a Percy Pig flavoured sponge, topped with Percy Pig-flavoured fondant icing. The cherry on the cake? Percy himself, of course," M&S said of the festive treat.

Other highlights of the supermarket's 2020 Christmas range include a chocolate orange Christmas pudding, chocolate pine cones, a giant gold bullion bar, salted caramel brownie liqueur, and a light-up Christmas gin liqueur, which is available in either clementine or rhubarb flavour and comes complete with flecks of edible 23 carat gold.