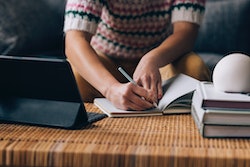 The uninitiated will call it woo-woo nonsense, but manifesting is simply the art of recognizing when you’re at the right place at the right time to make your dreams come true. A conversation with a friend of a friend at a bar might not look like a job opportunity at first glance, but if you’re actively thinking about making a career move, you might be more inclined to hit them up for an intro to that cool new start-up they mentioned. That’s manifestation in action. But how do you make manifesting a part of your everyday life?

Enter the Manifesting App, a new iOS platform designed to make it easier to write your goals into existence. The free-to-download app, launched in January, delivers daily quotes and manifesting prompts to your phone, geared toward either self-esteem or romantic goals. You can check off the app’s daily manifesting tasks or set calendar reminders for yourself to do them later. In the paid version of the app, which costs $30 per year, you can journal responses to affirmations like “I cultivate a peaceful mind.” You can also make the app a widget on your iPhone’s home screen for peak #aesthetic.

The app was created by Dalila Salgueiro, a public relations professional by day and manifesting coach in her downtime. Salgueiro became interested in manifestation following a painful breakup and a realization that she didn’t feel aligned with her higher purpose, she tells Bustle. She studied astrology with one of the top astrologers in her native Venezuela, then began a journey of self-actualization.

“Manifesting, for me, is not just about [saying], ‘Oh, I want to have this beautiful life,’ and visualizing it. That’s part of the journey, but it's also [about asking], ‘How do I work to get there?’” Salgueiro says. She compares the process to getting served the wrong order at a restaurant: “If they bring you steak with potatoes instead of salmon and salad, immediately you’re going to say, ‘No, this is not what I ordered’,” she says. In relationships, careers, or life, you have the power to identify what you ordered and when you’re getting served something different — and, in the latter case, the ability to do something about it.

There are lots of manifestation apps available on the App Store that also offer daily quotes or affirmations, but what’s different about the Manifesting app is that subscribers can request a complimentary 15-minute manifesting session with Salgueiro through the platform.

Salgueiro hosted me for a manifesting session on a recent Monday morning. After analyzing my birth chart, the details for which I’d previously sent her via email, and learning about some of my goals, she prescribed me the mantra, “I surrender to the love of the universe for my needs to be met, and I can rest in the presence of love.” Nice, right? As a Capricorn sun, Venus, and Mars, one of my biggest difficulties is exactly that — surrendering — so I asked Salgueiro for advice in doing so. She suggested that I look for ways to mentor others. “Rather than focus on yourself, focus on others,” she said. “If you help people with their career path, that will help you live more intentionally and be more aligned because you will reduce pressure on yourself.” Salgueiro also called out my Saturn in Aquarius, noting that though Aquarius is a free-thinking sign, Saturn’s rigidity can bring tension into my life. She advised stretching and yoga exercises to help balance the transit.

I set two goals for myself following my coaching session: Exercise more and find ways to mentor. (That first one has been my goal ever since I started working from home, but there’s no time like the present to start, right?) I installed the Manifesting app widget on my iPhone’s home screen on my “fun apps” page, and seeing the daily quote whenever I went to open TikTok kept it top of mind over the course of the day.

A few days following my coaching session, the app’s daily affirmation was, “I love feeling strong and healthy.” I journaled about recommitting to a Pilates practice, something I had done regularly pre-2020. Over the course of February, I was able to finish at least three short workouts per week, multiple weeks in a row. That was roughly triple the amount I’d worked out in the two years prior. The practice reminded me how easy it can be to fit a workout into your day, and how good it feels after. Exercise more? No sweat.

After a few weeks of using the app, I got an email from my high school asking if I would speak to current seniors about my career. Naturally, some big feelings came up when I thought about high school, but just a few days later, my quote of the day was, “The ego loves to keep us trapped in the past. Now move on.” I accepted the invitation — and boom, checked mentoring off my list.

Though I saw fairly quick results as far as my goals were concerned, I wasn’t able to complete the daily manifesting task every day. What’s more, so far, I’ve only used the app over the course of a month, where Salgueiro suggested having a manifesting check-in six months or a year down the road. But I found the app to be a helpful reminder to keep my goals at the forefront of my mind, which in turn, helped me take advantage of opportunities to manifest them.

“The whole purpose is to live intentional,” Salgueiro says. “When you live with intentionality, everything you do has a purpose.”