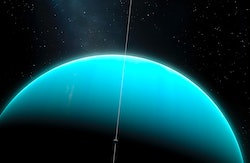 Your zodiac sign can tell you a lot about your quirks and traits — but how did it earn its reputation? Your sign’s planetary ruler gives it its defining qualities. In astrology, each planet possesses characteristics that are absorbed by the zodiac sign it governs. For the eccentric and defiant Aquarius, two intense ruling planets are responsible for the water bearer’s rebellious streak and ultra-analytical side. They give these mighty air signs the grit to break the rules and the ambition to create change in society. In traditional astrology, Aquarius is ruled by Saturn, while in modern astrology, it’s ruled by Uranus.

Like some zodiac signs who are represented by both modern and traditional planetary rulers, Aquarius gets its vibe from Uranus and Saturn. Aquarius’ modern planetary ruler, Uranus, is known for being disruptive. When this planet turns up, it’s about to radically shift perspectives or bring about a huge change in your life — whether you’re ready or not. On the flip side, Aquarius’ traditional ruler, Saturn, reflects the virtues of discipline and responsibility, which speaks to why the water bearer feels an intense duty to help society.

You don’t have to be an Aquarius to learn about its ruling planets — it’s a great way to dive deeper into your own birth chart. Keep reading to get to know both the traditional and modern planetary rulers for Aquarius.

All About Uranus, Aquarius’ Ruling Planet

Traditional astrology only incorporates the seven celestial bodies you can see with the naked eye — the sun and moon, plus the planets up to Jupiter — while modern astrology, appropriately, incorporates the more recently discovered planets Uranus, Neptune, and Pluto. Astronomer William Herschel discovered Uranus in 1781, though he mistook it for a comet at first. This ice giant was named after the Greek god of the sky, known also as the ruler of the universe. In astrology, Uranus is called the “Great Awakener,” because its energy is disruptive, honest, and unpredictable.

This icy planet represents sudden shock that serves as a reminder something in your life needs to be changed, and it’s putting you through obstacles purposely to push you forward. In transit, Uranus is ready to drop a bombshell of a surprise. Think of this ice giant as being a ringtone chiming off in a dead-silent conference room — this heavenly body is here to cause a scene with a message that can’t wait.

Uranus is all about the shock factor and aims to change conventions — which explains why Aquarius is always pushing for innovation and progressive society. The ice queen pumps the breaks and calls out what needs to be acknowledged in relationships, at work, and in your social life, similar to the Aquarian way of challenging the status quo with intentions to progress forward as a collective.

“Uranus is a planet of unexpected change. Uranus energy very much promotes the ‘rebel without a cause’ type of energy. But all in all, Uranus’ rule is to question authority and to teach us that uniqueness and unconventionality can be a beautiful thing,” astrologer MaKayla McRae, aka TheStarryEyedMystic, tells Bustle.

Saturn is named after the Roman god of agriculture and symbolizes responsibility and discipline. In traditional astrology, Aquarius shares its planetary ruler with Capricorn, which is also ruled by Saturn. (Fun fact: In Greek mythology, Uranus is the father of Cronus, aka Saturn in Roman mythology, who was the father of the pantheon of Greek Gods.) This malefic planet may sound intimidating, but its mission is to encourage hard work and maturity.

Saturn is about longevity and preserving traditions. Though Aquas object to the status quo, Saturn lends Aquarians their objectivity and analytical mindset.

“Saturn is more so focused on structure. It seeks stability, boundaries, and practical application. This makes sense why Aquarians tend to have a detached approach, looking at the situation's big picture, without letting subjective emotions cloud their view,” explains McRae.

Between Uranus’ unpredictability and Saturn’s need for sturdiness, it’s no wonder Aquarians are known to be hard to pin down. Their need to question authority (Uranus) almost defies their stoic philosophy (Saturn), but ultimately, these planetary influences means Aquarius is about replacing traditions and progressing humankind forward.

More like this
Here's Your Daily Horoscope For May 18, 2022
By Mecca Woods
Are Gemini & Scorpio Compatible In A Relationship?
By Kristine Fellizar
How Gemini Season 2022 Will Affect Each Zodiac Sign
By Brittany Beringer
4 Things To Do & 3 Things To Avoid This Gemini Season
By Brittany Beringer
Get Even More From Bustle — Sign Up For The Newsletter