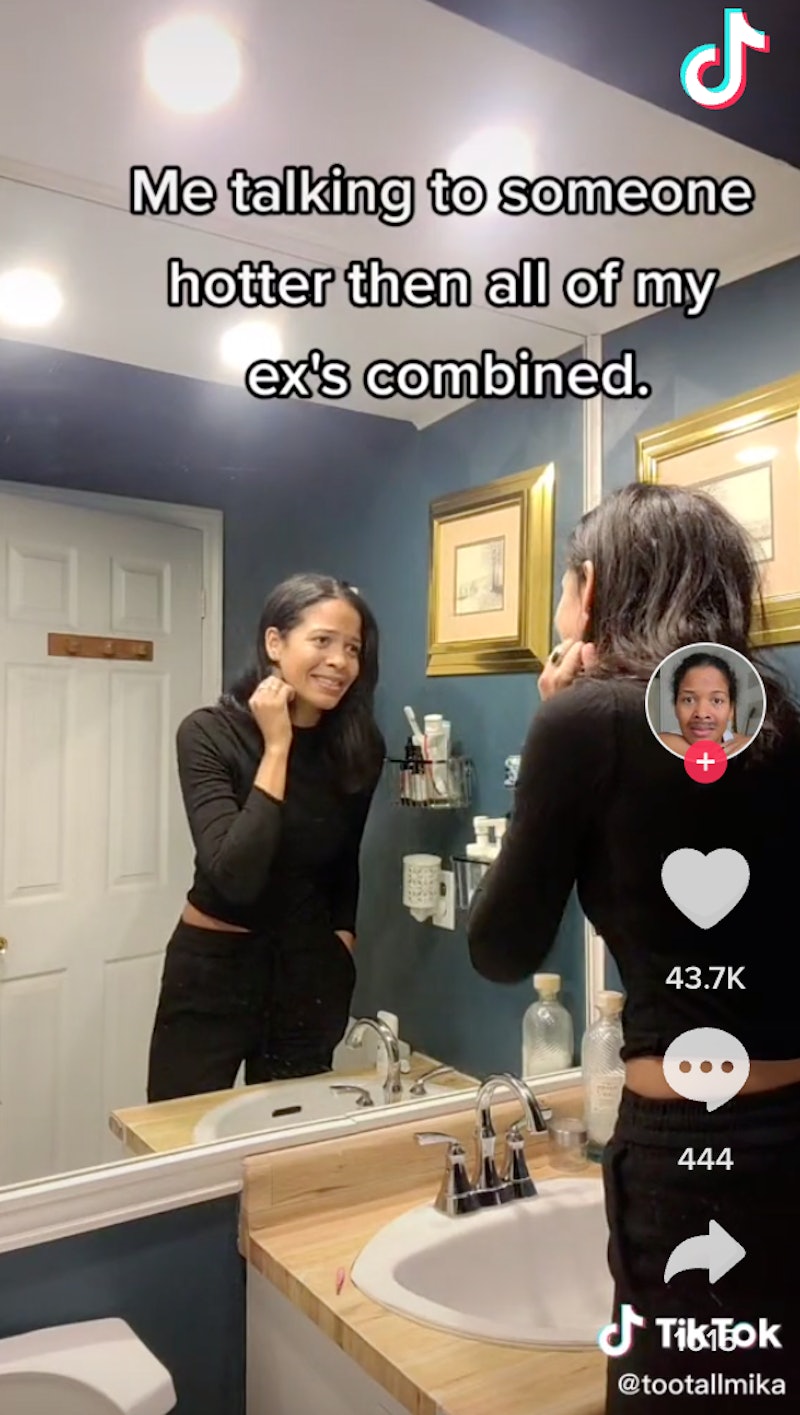 Screenshot via TikTok
By Emma Carey
May 5, 2022

If you’ve been scrolling on TikTok lately, you might be mystified by the amount of videos you’ve seen of people talking to… well, no one. Sure, it’s pretty common for users to talk to an invisible audience on the app — ranting into their front camera about their latest hot take or newest obsession. But a new trend emerging in late April 2022 has taken this a step further — prompting thousands of creators to stage full-blown conversations with absolutely no one, with captions that say things like “Me talking to a friend group funnier than mine.” (Translation: There’s no friend group funnier than theirs, duh!)

“Me talking to a girl that’s more attractive than my gf,” reads one of the top videos using the trend’s associated sound, a dramatic orchestral score that now has over 40,000 videos under it. The creator, @dreeeyy_, is shown conversing with an offscreen character before the scene cuts to show the creator standing in a hallway alone.

No, imaginary friends aren’t having their day in the sun on TikTok. Instead, the trend is just TikTokers’ clever way of describing a title that belongs to no one. Of course, TikTokers have taken the trend and run with it, turning it on its head with other clever, unexpected jump cuts and transitions.

Here’s everything you need to know about the “me talking to” trend.

The “Me Talking To” Trend

It seems that the “me talking to” trend format first originated from an April 18 TikTok, in which TikToker @.tyronic posted a video captioned, “When you’re getting jumped by all of Coi Leray’s fans.” The user is seen on the ground, seeming to guard themself from oncoming hits. However, when the video cuts to a wider shot, the TikToker is shown to be in an empty room, quickly realizing no one is jumping them. (The joke being that rapper and singer Coi Leray doesn’t have any fans.)

Many users under the trend’s affiliated sound have followed this format, pretending to be “jumped” by various nonexistent parties like “all his ex gfs that are prettier than me” or “a girl who wears a different bra every day.” (Seriously — who has enough bras for that?) However, since the trend has taken off, users have opted for a format that’s a tad less dramatic.

And thus emerged the “me talking to” trend. The trend usually involves flexing that nobody is hotter than the poster’s significant other, or funnier than their best friend.

There are, of course, other ways to use the trend to flex. “Me talking to someone hotter than all of my exes combined,” writes TikToker Marika Bouchard, before cutting to a shot talking to the mirror. Or, there’s @jennern’s video, which cuts to a sea of countless people to show “someone more attractive than my ex.” Ouch.

One of the best parts of this trend is that it doesn’t require any scene partner. To make your own “me talking to” video, head to the trend’s sound, and take a shot of yourself as if you were talking to someone off-screen. End the shot, then set up your camera further away so that you can be seen talking to no one. (Or, of course, talking to yourself in the mirror.) Then, take another shot in which you continue the conversation before realizing no one is there.

Add your clever caption, such as, “Me talking to someone who doesn’t think this trend is funny.” Then, just hit post and wait for the likes to come rolling in.

More like this
How To Use The Crying Filter On Snapchat, TikTok, Instagram & More
By Emma Carey
TikTok Is Using A ‘Love Island’ Sound To Expose Their Weird Crushes
By Courtney Young
The True Meaning Behind Each Hand Emoji
By Bustle Editors and Emma Carey
How To Add Music To An Instagram Post
By Emma Carey
Get Even More From Bustle — Sign Up For The Newsletter