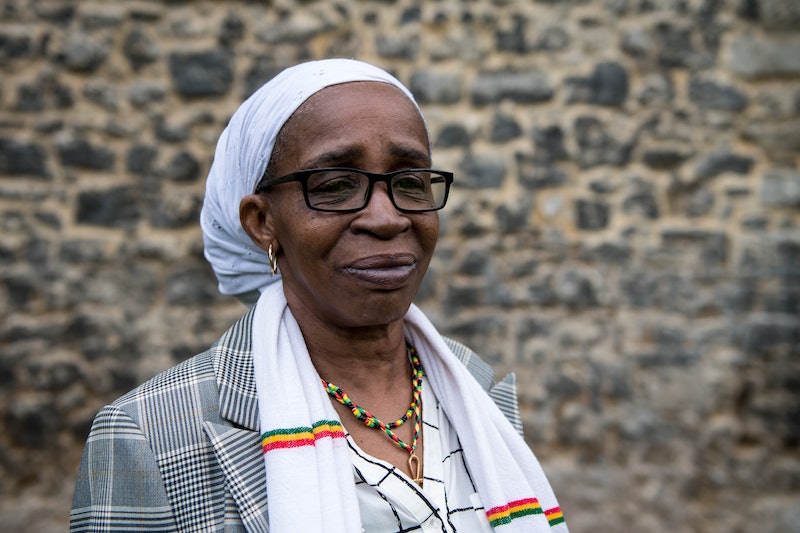 Paulette Wilson, a Windrush campaigner who faced deportation, passed away last week at the age of 64. Her death is a stark reminder of the mistreatment of many UK citizens, and the importance of her fight to empower others in similar positions.

Wilson moved to the UK from Jamaica in 1968, and has lived here ever since. But, in August 2015, her benefits were stopped, she subsequently became homeless, and in October 2017 she was held for a week in Yarl’s Wood immigration removal centre, and told she was going to be deported back to Jamaica – a country she hadn't visited since she left aged 10. She was later released, granted indefinite leave to remain by the Home Office, and in 2018 she received a personal apology from immigration minister at the time, Caroline Nokes, per the Guardian.

Wilson, who previously worked in the canteen of the House Of Commons, was one of many who faced deportation under the "hostile environment" immigration policies, brought in by the Home Office under Theresa May from 2012. Her decision to speak up about her experience proved instrumental in highlighting the injustice of the Windrush scandal.

Wilson was one of the first people to speak out and inspired many more people to come forward and tell their stories. She worked alongside The Guardian reporter Amelia Gentleman, who broke the Windrush scandal in 2018, and went on to spend the next two years campaigning up until her death.

In May 2018, Wilson's daughter Natalie Barnes told The Guardian: "“I’m so glad we spoke out and I’m so glad it meant so many other people came forward with their stories and that now they are all being recognised as British citizens – which is what they are. This has changed my mum: it has brought her confidence back. She can’t stop smiling.”

Wilson's death came just a few weeks after she brought a petition to Downing Street, with more than 130,000 signatures calling for action to address the failings that led to the Windrush scandal. In a statement, her daughter paid tribute to her mother's strength and commitment to the cause: "My mum was a fighter, and she was ready to fight for anyone. She was an inspiration to many people. She was my heart and my soul and I loved her to pieces.

"She was widely loved and respected; her laugh was infectious and she loved to see people smile; she will be missed by us all."

Many more have since paid tribute to Wilson, including her friend and fellow Windrush campaigner Patrick Vernon, who told ITV News: “It's a complete shock. She died a broken woman, that's all I can say.” Vernon has set up a gofundme campaign, to raise money to support Wilson's family and cover the costs of her funeral – it has already far surpassed the initial target of £6,000, with over £15,000 of contributions at the time of writing.

Alongside this, Vernon is also campaigning for an improved compensation scheme for Windrush survivors and family members. There have been multiple reports of the impact the scandal has had on those threatened with, and victims of, deportation. In 2018, after his immigration status changed and he lost his job, Dexter Bristol died of a heart attack, which his mother says was due to the stress of these circumstances. Meanwhile, a number of people who have been deported from the UK to the Caribbean have been targeted and killed, according to reports in The Guardian.