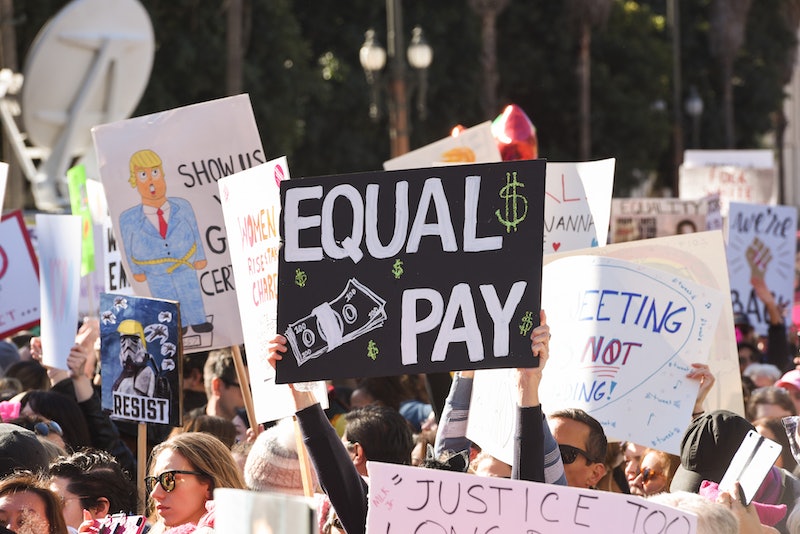 Every year, Equal Pay Day is observed to bring awareness to the disparities women face when getting paid in the work place. This year, Equal Pay Day falls on March 15 according to census findings. The date fluctuates every year since Equal Pay Day is meant to symbolize how far into the year women must work to earn what men earned in the previous year. To honor the important day, there are many quotes from powerful women about equal pay to read, repeat, and share with those in your life.

Pay Equality Day was created in 1996 by the National Committee on Pay Equity as a way to make the public aware of the pay gap between men and women. But this date isn’t the only Pay Equality Day in the year since not all women are paid equally. The National Women's Law Center reports that mostly white women working full time are "paid only 83 cents for every dollar paid to their male counterparts."

By demanding stronger laws to fight back on pay discrimination, we can take action to bring equal pay to all women. Educate yourself, get involved, speak up for you and your colleagues especially if they're making less than you in the same industry and position. Perhaps one way to start getting inspired is by reading these quotes from powerful women about equal pay.

"When I joined four teammates in filing a wage-discrimination complaint against U.S. Soccer late last month, it had nothing to do with how much I love to play for my country. It had everything to do with what's right and what's fair and with upholding a fundamental American concept: Equal pay for equal play." - Carli Loyd

"Equality will be achieved when men and women are granted equal pay and equal respect." - Beyoncé Knowles

"If Equal Pay Day 2018 was celebrated on November 1, when all women have earned as much as white men earned in 2017, then Latinas, not 'average' women, are the standard by which the pay gap is measured. This allows us to tell a different and more inclusive story about women, work and wages than the story we tell by celebrating Equal Pay Day days before all women actually earn as much as white men earned the year before." - Lisa Crooms-Robinson, Professor of Law and Associate Dean for Academic Affairs at Howard University via CNBC

"I don't think standing up for myself for equal pay is complaining or something I should be afraid of." - Gina Rodriguez

"I am in a rare position to be financially successful beyond my imagination. I had talent, I worked like crazy and I was lucky enough to break through. But today isn't about me. It's about the other 24 million black women in America. If I never picked up a tennis racket, I would be one of them; that is never lost on me." - Serena Williams

"I want to be paid fairly for the work that I'm doing. That's what every single woman around the world wants. We want to be paid on parity with a man in a similar position." - Felicity Jones

"Since President Kennedy signed the Equal Pay Act in 1963, the gap between men and women's earnings has narrowed by less than a half-cent per year. At this rate, American women will have to wait until 2062 to bring home the same salary as their male counterparts." - Jackie Speier

"Today there are people trying to take away rights that our mothers, grandmothers and great-grandmothers fought for: our right to vote, our right to choose, affordable quality education, equal pay, access to health care. We the people can't let that happen." - Kerry Washington

"The reality is that if we do nothing, it will take 75 years, or for me to be nearly a hundred, before women can expect to be paid the same as men for the same work." - Emma Watson

"I think part of it is [people] really engaging in self-examination. The thing about implicit and unconscious bias is you may really not be aware that you are discounting individual experiences and expertise based on characteristics like race and gender." - Emily Martin via CNBC

"We still are not paid equally. And if you believe that it's a myth, do the math. Unequal pay hurts women. It hurts their families. And it hurts us all. You and I have to continue fighting for equal pay for equal work. I get up each day with that on my mind, because I need to make a difference." - Lilly Ledbetter

"So I say to the women out there in America, let's keep this fight going! Put on your lipstick, square your shoulders, suit up, and let's fight for a new American revolution where women are paid equal pay for equal work, and let's end wage discrimination in this century once and for all!" - Barbara Mikulsi

"We need women to support each other. We still don't have equal pay." - Sonia Sotomayor

"The boys are still getting more money for a lot of garbage, while the ladies are hustling and doing amazing work for less." - Tina Fey

"Latinas are more than the paltry representation and tired stereotypes we see reflected in American culture. We are powerful and essential from fields to frontline hospitals, classrooms to boardrooms. We are contributing across business, technology, entertainment, government, and beyond. We are more than deserving of fair pay for the great and essential value we add to our country’s economy and well-being. It’s high time that others acknowledge that accordingly. Latinas deserve to have our power reflected in the culture and in our paychecks." - America Ferrera

"I can't believe we're still talking about equal pay in 2014. Today, in 99.6% of all occupations, men are earning more than women. That's not an accident, that's discrimination." - Elizabeth Warren

This article was originally published on April 1, 2019