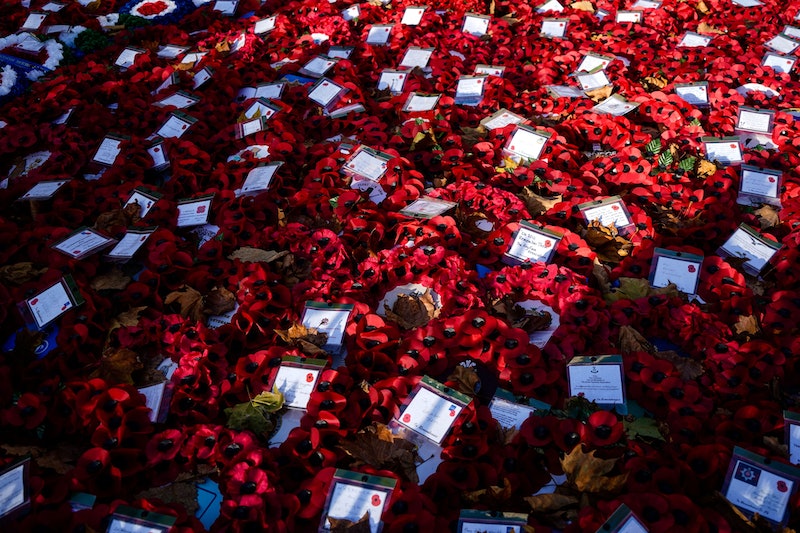 The British military has a long history of homophobia. Up until 2000, it was illegal for LGBTQ+ people to serve in the army, and if discovered in the forces, closeted queer soldiers were dismissed and stripped of their medals. Meanwhile the Royal British Legion — the country’s biggest charity for veterans — has previously excluded queer military and their partners from remembrance services, despite the fact that lesbian, gay, bisexual, and transgender people were amongst those who served in World War II. But now the Royal British Legion has issued an apology for its history of LGBTQ+ discrimination amongst its ranks.

When the activist group OutRage! began laying pink triangle wreaths and holding dedicated queer remembrance events back in 1997 to commemorate these soldiers — who had to conceal their identities in order to join — the RBL said the “distasteful” Queer Remembrance Day was "bound to offend many former soldiers".

Campaigner Peter Tatchell later wrote to the charity in 2007 to call out its erasure of LGBTQ+ service-people, and to refute claims that OutRage! was “making political capital” out of Remembrance Sunday. “Who does the British Legion think it is? It is sheer arrogance for you to criticise and demean our act of remembrance,” he wrote.

For over two decades the RBL failed to respond at all, and as reported by The Guardian, Tatchell followed up on his original note in late 2021. Finally addressing concerns of homophobia, the charity’s director general Charles Byrne, who took over in 2016, has now responded, apologising for the organisation’s previous failure to act.

“I am deeply saddened by your previous experience with the charity, and I can only apologise on RBL’s behalf for not responding and the discrimination shown at the time,” he wrote. “The behaviour you outline of the RBL of the past is not tolerated in today’s organisation.” In 2019, the Royal British Legion opened its first ever LGBTQ+ branch to support queer veterans.

Responding, Tatchell accepted the charity’s overdue apology. “Our praise and thanks to the Legion for eschewing its homophobic past with this forthright and fulsome apology,” he said.

“We are delighted by its commitment to support LGBT+ veterans and work with the LGBT+ community. This draws a line under the pain of the RBL’s previous prejudice and discrimination.”