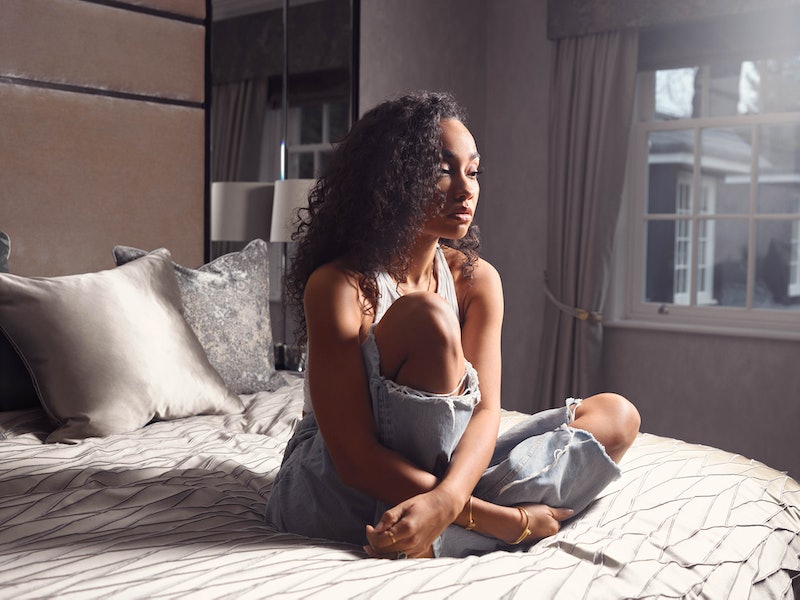 Little Mix star Leigh-Anne Pinnock was praise for opening up about her experiences of racism in the entertainment industry in her BBC Three documentary, Leigh-Anne: Race, Pop and Power, released on May 13. The hour-long documentary explored Pinnock’s experiences as a Black woman in one of the world’s biggest girl bands for over a decade. Fresh off the back of their historic win as first all-female group to win Best British Group at the BRIT Awards, the Little Mix singer spoke openly about the real cost of being in the spotlight, explaining the different treatment she experienced.

Closing the documentary with a vow to change the industry from the inside, Pinnock announced that she has launched a charity with her fiancé, Watford striker Andre Grey. The Black Fund was born out of their “desire to do more” for the Black community in the UK. Here’s everything you need to know about Leigh-Anne Pinnock’s new charity, The Black Fund, and how you can support.

What Is The Black Fund?

Pinnock and Grey’s new organisation, The Black Fund, aims to empower Black communities by help Black people get into the creative industries by channelling finances and other support to charities doing important work like this. Per Leigh-Anne: Race, Pop and Power, the charity was directing inspired by the Black Lives Matter movement and was set up by Pinnock; her sister, Sarah; and Andre Grey. Jay Blades – of The Repair Shop and Money For Nothing fame – is also a trustee.

“With the privilege and the position we have been blessed with, we’re going to do everything we can to see an end to racism in our time,” Leigh-Anne and Andre write on the official Black Fund website.

“I’ve spoken about the racism I’ve experienced in my own life. I knew this was an opportunity to go beyond talk,” the star continues. "We decided to make the Black Fund to basically create and make a pot of money to give out to Black charities and to help the Black community."

Through the Give Back programme, The Black Fund will distribute grants of up to £5,000 to fund programmes which empower Black people to stand up against racism.

How Does The Black Fund Work?

The Black Fund was started with Pinnock and Grey’s own resources, but is “based on the traditional Paadna, a traditional Jamaican savings scheme,” the charity’s website explains. “The way it works is simple: everyone contributes to each collecting round, and the proceeds are paid out to a member of the group. Ultimately, over time, everyone benefits.”

“The Black Fund collates donations from like-minded contributors who are passionate about the elevation of the Black community,” read a post on the charity’s Instagram. “All donations are collected and then distributed to Black-led charities through our funding initiative, The Give Back Fund,” adding on the website that “when all the money is allocated, we’ll begin fundraising for the next round.”

Who Can Apply For The Black Fund?

Per the charity’s website, “any UK-based charity or community group involved in ending racism or supporting Black people can apply for a grant.” Registered UK-based charities and community groups that are considering applying must have an annual income of less than £200,000, and judging by the application form, must also have an idea of how they will measure and monitor their success.

“You should have at least one active social media account, an up-to-date safeguarding policy and be able to submit your previous year’s accounts for the trustees to have a look at as part of the application process,” it notes.

How Can I Support The Black Fund?

You can share the Black Fund’s social media posts, and to make a donation you can email per the website.

Leigh-Anne: Race, Pop & Power aired on Thursday and is now available to watch on BBC iPlayer.

More like this
Here’s Where The NHS Nurses’ Strike Currently Stands
By Sophie McEvoy
Gen Z Are Twice As Likely To Identify As Queer, According To New Data
By Sam Ramsden
Matt Hancock’s TikTok Is The Most Matt Hancock Thing Ever
By Sam Ramsden
10 Equally Romantic & Heartbreaking Books From British & Irish Authors
By Shahed Ezaydi
Get The Very Best Of Bustle/UK
Sign up for Bustle UK's twice-weekly newsletter, featuring the latest must-watch TV, moving personal stories, and expert advice on the hottest viral buys.