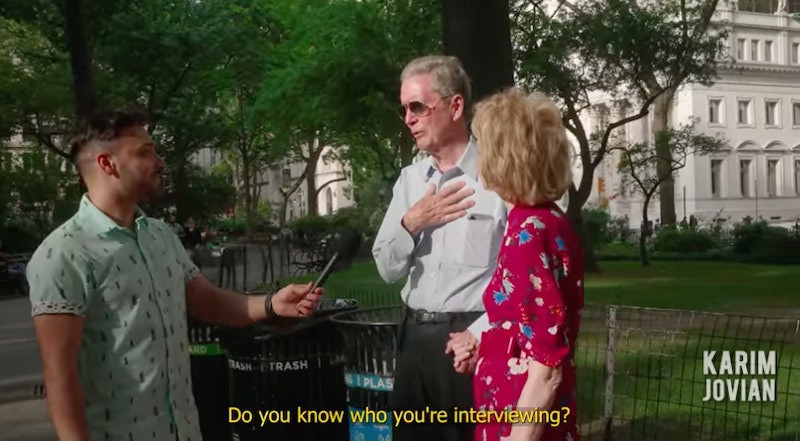 Videos on TikTok of creators walking through crowded areas to ask timely questions to random passersby often go viral. On June 24, following the announcement that the Supreme Court officially overturned v. Wade, content creator @karimjovian took to the streets of New York to ask people their thoughts on abortion. Most respondents share their opinion and how they came to that stance, answering follow up questions as Jovian asks them.

One particular clip from Jovian’s video is going viral, with over 6.7M likes. In the 40-second snippet from his YouTube video that was posted on TikTok, Jovian approached a couple on the streets by saying “We’re here in New York City asking people their thoughts on abortion.” The man promptly responds, “Do you know who you’re interviewing?” the man goes on to explain his identity, saying, “I’m Alexander Sanger. I’m the former president of Planned Parenthood of New York. My grandmother was Margaret Sanger, the founder of Planned Parenthood.”

He then answered the original question: “You cannot make abortion go away by criminalizing it. All you do is you make it unsafe.” He continued by explaining how people of color and those with fewer financial resources will be the most affected by the abortion bans that will be enacted without the protection of Roe v. Wade.

Jovian’s video has over 25.5M views on TikTok and over 215,6000 shares. Many commenters expressed their agreement with what Sanger shared in the video with remarks like “what he said times a million” and “good man.” One commenter wrote “the only ‘do you know who I am’ I will accept.”

Who Was Margaret Sanger & Who Is Alexander Sanger?

Margaret Sanger was a birth control activist who helped open the first birth control clinic in the United States in 1916. Five years later, Sanger founded the American Birth Control League, which eventually became the Planned Parenthood Federation of America. In recent years, her writings have been criticized for their belief in eugenics, a racist and ableist ideology, per Planned Parenthood.

Her grandson Alexander Sanger is a reproductive rights activist and former president of Planned Parenthood of New York, where he helped launch an initiative to offer extensive medication abortion training to healthcare providers, according to his website.

Since being posted on TikTok on June 24, the video has made its way to Instagram Reels and Twitter for further commentary by those online. Perhaps the most notable detail of the video is that two generations later, a Sanger is speaking out about reproductive healthcare. Yet another reminder that the fight for reproductive rights has been going on for decades.