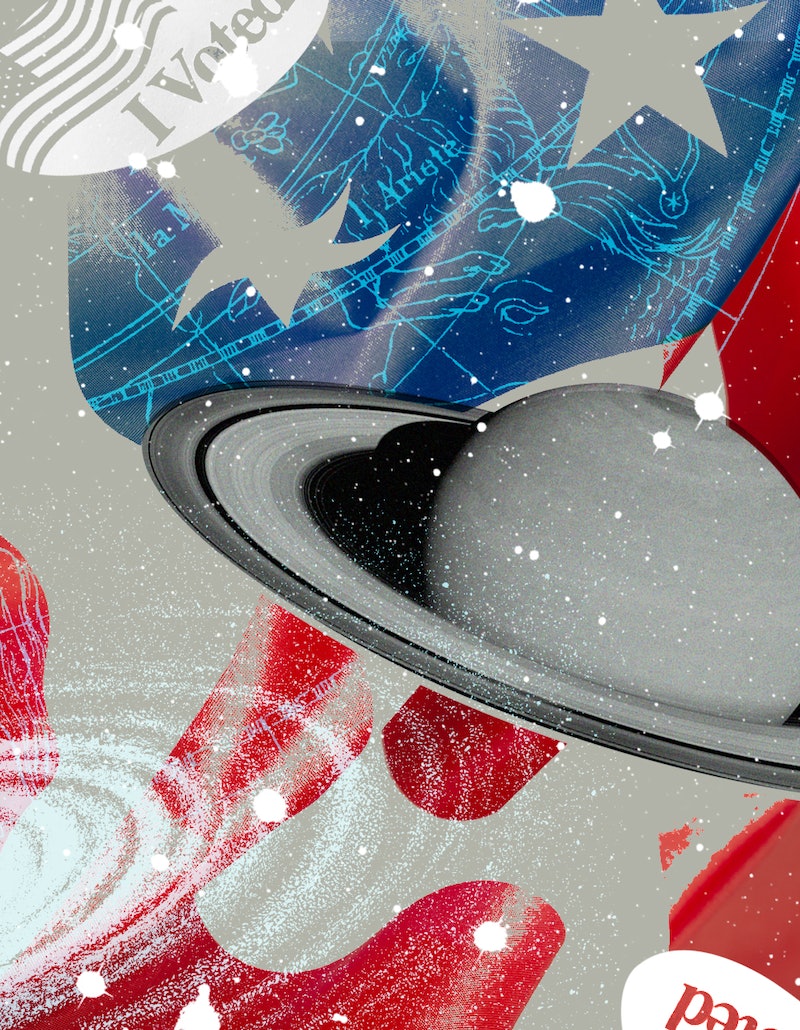 It's hard to have a single conversation without acknowledging the overarching theme of chaos that's reigned over 2020. The events of the past year — the coronavirus pandemic, the Black Lives Matter movement, and the election — have catalyzed an avalanche of changes in our lives. But if you dig into the astrology of 2020, it makes sense. Astrologers warned us about 2020 for years due to the many rare and foundation-shifting planetary clashes, alignments, and retrogrades taking place.

As astrology lovers turn to the stars to help make sense of what's happening here on earth, some astrologers have started weaving social justice issues into their work. A quick scroll through popular astrologer Chani Nicholas' Instagram shows videos around the election and global human rights crises alongside colorful animations about scorpio season and October's New Moon. A post about Mercury going direct with a caption about getting to the polls on Nov. 3 has almost 20,000 likes. A peek at astrologer Jessica Lanyadoo's feed shows shareable images and aesthetically-designed Twitter screenshots that blend astrology and empowerment. Lanyadoo's recent Story highlights include videos on voting, tools for promoting racial justice, and astrology book suggestions for her 100,000 followers. Times are changing, and so is the face of mainstream astrology.

Unpacking the astrology of 2020 through the lens of politics and mirroring the positions of the planets against real-world events is a hot topic for anyone who's even vaguely into horoscopes. And for many astrologers, using their platforms for social change has become a responsibility throughout this year's events.

The Intersection Of Astrology & Politics

Looking at politics and social issues through the lens of astrology is nothing new for some astrologers, though it wasn't always so mainstream. "I’ve always been very explicit about my politics in my work with every hope that it helps build community," says Nicholas, who has 376,000 Instagram followers, writes horoscopes, and is the author of You Were Born For This: Astrology For Radical Self-Acceptance. She notes there's been an influx of people seeking astrological perspectives on global issues during 2020. "[It's] because we need all the insights we can get," Nicholas says. "In times of tremendous upheaval such as this, we are generally more open to systems that help us contextualize the moment. Astrology, plus a deep investigation into history, gives us all the context we could want."

Astrologers are also finding themselves answering to the demands of astrology fans. "I always try to make astrology relatable to issues that we face as a global community and applicable to the political climate. However, in 2020, I've noticed more and more people seeking out forecasting and predictions around current events," astrologer Alexandria Lettman of online healing collective The SoulUnity tells Bustle. "I've felt more of an obligation to analyze global events using astrology because when something happens in the world and I don't comment, I'll get DMs asking what the astrological significance of it was. People are definitely more tuned in to [politics] this year."

For Lanyadoo, politics weren't always part of her public-facing astrology work. "When my work was primarily client consultations and writing horoscopes, it wasn’t appropriate to lead with my political convictions," Lanyadoo says. "Since I started my show, Ghost of a Podcast, in 2018, I have had a platform to share more dimensions of my work as an astrologer." She's since used dissected the astrology of ICE, the Americans with Disabilities Act, Roe v. Wade, the events of 2020, and more on her podcast. "I do my best to unpack the [planetary] transits in the context of both their personal and social implications."

Some astrologers think the trend is reflective of the intensity of this year's political events and social justice movements — and the unique astrology of 2020 that mirrors it. "I think that my work gets more political every year as I mature and my platform expands," Lanyadoo says. "[But] the primary changes in my work are a reflection of the transformational astrology of the times, as opposed to my work itself."

Looking To History To See The Future

Getting a cosmic history lesson from an astrologer can help you make sense of the current events and plan ahead. "Astrology is a powerful tool for understanding the past and how it laid the groundwork for the present — and what we’re most likely to be coping with in the future," says Lanyadoo. "It offers us the capacity to track cycles, and to see how an event, or moment in time, is directly connected to the past. Once we understand our past, we can contextualize our present and best plan for a better tomorrow."

Some of the intense planetary aspects taking place now are similar to those that took place during chaotic moments in history, including the outbreak of the Spanish flu pandemic in 1918 and the fraught 2000 Presidential election.

"Astrology uncovers deeper meanings, purpose, and offers direction — which is what we've all been craving amidst the happenings of 2020."

The movements of the outer planets in astrology, which have a bigger impact on the collective, are also a hot topic right now. "Saturn and Pluto joined forces this year, which is a highly significant and rare occurrence that we saw during the outbreak of World War I and right after the 1929 Wall Street Crash," Lettman says. "Astrologers knew the energies of these planets together would bring along destruction, power imbalances, and secrets coming to light — we just didn't know which form these energies would manifest as exactly."

It's no wonder that astrology fans have watched their feeds in fascination as popular astrologers made these connections in real time. "My politically-focused astrology work is what's currently getting the best reaction in terms of people engaging with it, giving feedback, and asking for more content," Lettman says. "It's constantly on people's minds and present in their environment. Astrology uncovers deeper meanings, purpose, and offers direction — which is what we've all been craving amidst the happenings of 2020."

Beyond unpacking recent events and meeting the demands from astrology fans, astrologers are digging deeper with their platforms, too. "Right now, we must move toward justice with every tool we’ve got access to," Nicholas says. "Astrology is mine, so I use it to the best of my ability. No matter the industry we are in, 2020 has let it be known that justice needs every single one of us, and that there is no such thing as being apolitical."

In hopes to encourage astrology fans to vote and be more politically active this year, Lanyadoo co-founded Zodiac the Vote with political analyst Lindsay Scola in the fall. The site is complete with politically-charged astrology merch and cosmically-tinged information about the election, and they recently released a Mercury Retrograde Survival Guide. But instead of why you shouldn't text your ex or sign any contracts, the guide discusses precautions to take when it comes to voting, researching propositions and candidates, and making your voice heard.

"I hope to inform and educate [on] issues of social and political importance from an astrological perspective as a means to inspire engagement," says Lanyadoo. "We wanted to create a resource to connect the spiritually- and astrologically-inclined with relatable and reliable astrology content about the times we’re living in."

Like anything else, astrology is a tool — whether it's used for social change, self-reflection, or both. "If we are looking to the heavens and their movements and to what is happening here on earth at the same time, there is no way to not be political," Nicholas says. "I trust that everyone finds their own unique way to [use astrology as a form of empowerment] as we all come at the work from our own vantage points. I hope that my work can support people wherever they are at."

As astrologers are finding, people are seeking more than fun distractions from their astrology content in 2020. "Conventionally, when people think of astrology, they think of horoscopes and prediction, but that's only a tiny facet of astrology," Lanyadoo says. "As we say at Zodiac the Vote: We’re not here to predict the future, we’re here to create it."

This article was originally published on November 6, 2020