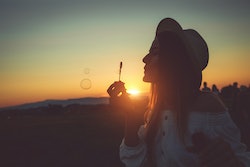 Given that we've survived the most recent Venus and Mercury retrograde periods, it feels like we're in the clear — but don't let yourself be deceived. There's actually a lot of retrograde energy influencing us in subtle ways right now, as all the outer planets in astrology are currently retrograde (plus Mars, which makes for a whopping six planets total). And while the outer planets' backspins don't always confuse things in our lives as acutely as the personal planets in astrology do, they still have the power to reshape parts of who we are — and offer us a major opportunity for growth, too.

The outermost planets all share relatively similar retrograde cycles. Unlike Mercury (which retrogrades multiple times per year) or Venus and Mars (which only retrograde about every other year), the more distant planets have one retrograde period each year, and they last anywhere from four to six months each. And ever since Uranus retrograde 2020 began on August 15, all five of these outer planets have been retrograde simultaneously.

The mass retrograde energy of these slow-moving celestial bodies is bringing about major shifts in the energy of the collective — each in a unique way — and they're prompting deep internal reflection in our personal lives, too. Here's how to work with the retrograding outer planets.

Jupiter and Saturn are the giant planets that reside just beyond the realm of the personal planets, but not quite so far away as the three outermost planets are. That said, their influence on us (as well as the effects of their retrogrades) may be felt a little more personally than the rest of the outer planets. "Jupiter retrograde is a time to reassess ethics and honor, [and] also to look within and recourse one's philosophy," astrologer Lisa Stardust tells Bustle. "Saturn retrograde is a time to re-evaluate relationships and commitments."

We're approaching the last chunk of both Jupiter retrograde and Saturn retrograde, as they'll both go direct in September. That said, the coming month is an important time to reflect on the way the past year has changed your personal values, the way you relate to others, as well as the way your responsibilities may have shifted. We've all had an intense 2020 so far, but ignoring the unavoidable shifts in priorities will only make us feel more lost. Acknowledge the tough lessons you've learned and the paradigm shifts you've experienced, and embrace a new, more matured version of yourself as you emerge out the other side.

Uranus retrograde and Neptune retrograde can work together to help us process this year's unpredictable, unprecedented changes in a more realistic way. These transits strip away the haze that we tend to build up around ourselves and offer us a chance to look at things with more clarity and a willingness to accept things as they are. Pluto retrograde, on the other hand, asks us to look at our shadow sides — this means it's time to deal with the monsters under the bed and skeletons in the closet.

What It Means In The Grand Scheme

These backspins have a great influence on us at a collective level as well, especially given the chaotic astrology of 2020 — and we all must start dealing with the darkness that lurks beneath the surface of our society. Uranus has shaken things up in unexpected ways (think coronavirus, nationwide protests, etc.), while Pluto's energy has used this opportunity to expose everything that our society has been hiding away. Meanwhile, Neptune is enabling us to lift the veil and see things for what they really are, while Jupiter and Saturn are helping us grow and mature as individuals so that we can better deal with the inevitable changes as they come.

All in all, these outer planet retrogrades are equipping us with the cosmic tools we need to make real, tangible change in the world — so long as we're willing to work with the energy.