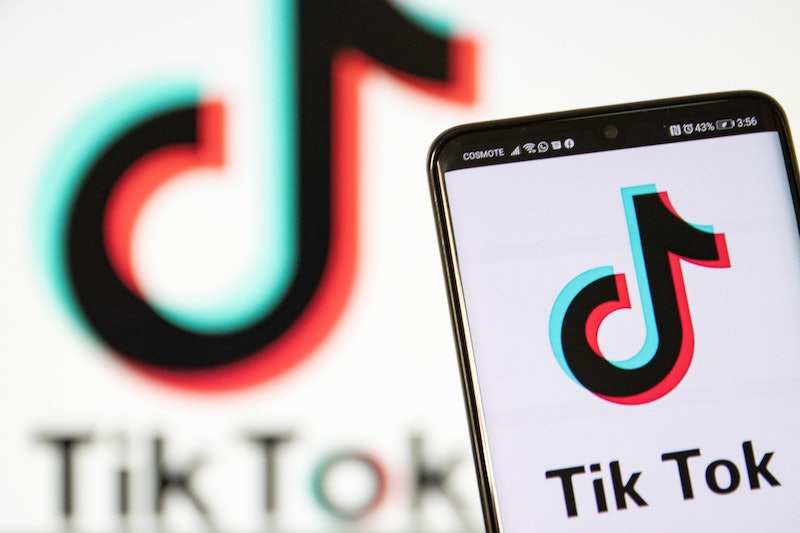 Over the last week, rumors that TikTok would be banned in the U.S. whipped into hyperdrive, after President Trump said he would do just that. Despite talks of a potential deal with Microsoft, which would purchase the app from China's ByteDance (and eliminate the data-sharing concerns that prompted talk of a ban in the first place), TikTok creators are anxiously seeking escape routes, just in case. Though a die-hard user might argue that no other app on the market compares to TikTok in terms of reach, accessibility, and editing software, there are apps similar to TikTok out there, though they might not be as user friendly, or have the communities TikTokers know and love. If you're looking to keep up with all the drama, you'll want to know what apps TikTok creators will go to, if there even is a ban.

"I have 6.5 million fans who prefer to engage with me through TikTok — if you take that away, you take away our home," Anna, who posts as @Glitterandlazers, tells Bustle. "TikTok was the first place I was able to break out of the plus-size mold, and just be a creator, versus a creator with a caveat," Anna says. She adds that she's been focused on fighting for TikTok to stay in the U.S., rather than seeking out new platforms to migrate to.

Even before a ban became public concern, creators like the D'Amelio sisters and Sway House members were looking for different ways to connect with audiences on YouTube. But according to social media expert Trina Albus, founder of the MAGENTA AGENCY, YouTube isn't going to work for all creators. "The content on YouTube and TikTok is completely different, and the effort required to produce successful YouTube content is hours more than TikTok," she says. Albus tells Bustle that apps like Byte, Triller, Dubsmash, and Likee "likely won't cut it." Instead, she predicts creators will find similar successes on Instagram Reels as they have on TikTok. "From what I've seen, it mimics a lot of the popular TikTok functionalities, like the For You page, so I think it has the potential to take the top spot."

While it's hard for Anna to imagine a platform that embraces her the same way TikTok has, she says she'd take cues from her following to determine where she'd go if the app got shut down. "I’ll do what I’ve always done and listen to my community, and do my best to support them somewhere new," she says.

Musician and creator Nick Tangorra shares his music with fans via TikTok, Instagram YouTube, and Spotify, but TikTok is really where he took off. "TikTok has catapulted my career and has taken me farther and faster than anything I’ve ever experienced before," he says. He attributes his success to the fact that TikTok makes it easy to be discovered by the broader community on the For You Page, something that he doesn't see as a transferable opportunity on other apps. "If you download any other social media app right now, and you post to zero followers, the odds are you’re going to wake up to zero page views, zero likes, and zero comments," he says. Uninterested in rebuilding his following on a new platform, Tangorra says that he'd turn his focus to more traditional music-making without TikTok. "I would continue to do my best to keep the amazing fans and supporters in the loop, possibly though texting apps and monthly YouTube vlogs," he says.

With a large YouTube and Instagram presence already established, plus a lot of time on the big screen, actor Adam Rose not too worried about losing an audience. And while he's hopeful that TikTok will persevere, he sees value in branching out, whether the ban happens or not. "’I'll be on Reels and Triller, because it’s important to diversify and not rely too much on one platform," he says.

Comedian and creator @brittany_broski is looking to the longer-form video platform for the future. "We're all going to YouTube," she tells Bustle, adding that she's hopeful she will "be able to migrate followers over to the platform if [the ban] happens." And while she's prepared to evolve her content and community if needed, she says she's very grateful for the time she's had on TikTok and what the app has opened up to her. Regardless of what happens with the app, it will be remembered fondly by its users and creators for the various communities it fostered, she says. "On TikTok you can find whatever subculture you didn't even know you were in."

More like this
How To Turn Off TikTok Profile Views So You Can Stalk Other Accounts In Secret
By Alexis Morillo
Wait, Does Liking Someone's IG Story = Shooting Your Shot?
By Alexis Morillo
This Wordle Rival Is Taking Social Media By Storm
By Sam Ramsden
Learning To Love, Not Judge, The Lunchbox Wives Of TikTok
By Esther Zuckerman
Get Even More From Bustle — Sign Up For The Newsletter
From hair trends to relationship advice, our daily newsletter has everything you need to sound like a person who’s on TikTok, even if you aren’t.