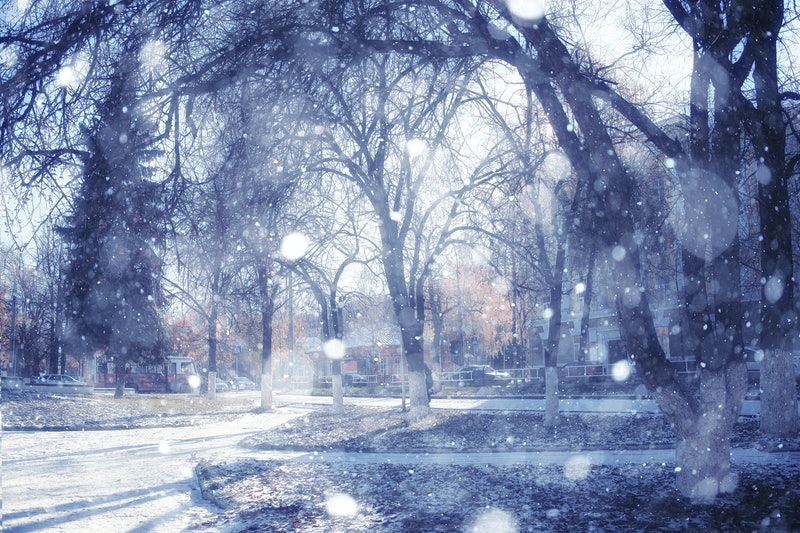 You snap a selfie of the squad at brunch, but it’s covered with shapes and light that definitely weren’t present IRL. The whole thing is giving you major paranormal feels. Is it a loved one from the other side, making a cameo in your latest feed pic? Or a simple technological mishap?

It's fairly common to find orbs, glowing circular specks of light in a dark area of a photograph, but differing opinions might have you wondering what is an orb, exactly. If you turn to the internet to find out what’s up with those pinpricks, you'll likely be directed down a trippy rabbit hole that will have you believing the spirit world is responsible for the presence of light in dark places. But you'll also find the word "backscatter," which is a photography term describing the way that light can capture particles in the air or water that are nearly invisible to the naked eye.

As with many things, like seeing the same number everywhere, or mysteriously hearing footsteps in the night, there's an explanation for orbs that lies in the scientific world and an explanation that lies in another realm. Are glowing balls of light in photographs merely pieces of dust or dirt enjoying a brief moment in the spotlight, thanks to a flash? Or is it something more, well, ghostly?

San Diego-based photographer Claire Johnson doesn’t believe orbs to be visitors from other realms, but does think orbs are more than just dust. “I love finding orbs in my photos — they’re caused by retro-reflection of light on dust particles or mist, but they give the pictures a ghostly-like feel to them,” she tells Bustle. And while she says other photographers often edit them out of photos, she prefers to leave them in. “I like the imperfection, the evidence that we’re surrounded by so much more than what we can see with our own eyes,” she says.

Amy Inglis, a Massachusetts-based photographer, is also open to the possibility that orbs aren’t just light reflections. “I do feel that lens flares and rainbows often show up in the perfect place,” she says. She often sees them when photographing events like maternity shoots, suggesting that a spiritual element is present in the images. A prophetic once told Inglis that she was “capturing angels” in her photographs, and that made her a firm believer in the mystical aspect of orbs.

Vannessa Williams, an energy worker and astrologer, collects photos “blessed” with orbs because she believes they are spirits making their way through the lens. “Orbs are confirmation that we are guided and protected by unseen energy,” Williams tells Bustle. She says she believes orbs are a representation of the human soul. “When we take pictures or videos, it is an opportunity for the energy of passed loved ones and ancestors to present themselves,” she says.

Lightworker Erica Davis says her experiences with orbs led her to learn she was a medium. “I saw an orb with the naked eye one day two years ago and it scared the crap out of me,” she tells Bustle. “After that day, orbs were on my security camera footage all day, then in my personal family photos and videos.” Not long after acknowledging their presence, Davis says she started to see faces in orbs, and felt they were moving “intelligently, up and down, left to right, or just floating still in one spot.” To her, this is proof that orbs are souls who want to make their presence known.

But not everyone believes that orbs have any metaphysical meaning. Los Angeles-based photographer Michael Isenberg tells Bustle that orbs are merely specks of dust in the air, caught by the light of a flash. “Besides that, dust, pollen, bugs, rain, and snow can be culprits too,” Isenberg says. “Orbs happen when these particles are close enough to lens, so they appear out-of-focus,” hence their otherworldly glow. “Even grime on a smartphone lens can cause ghostly artifacts.”

TL;DR? If you find comfort in the idea that orbs are more than floating particles of dust, you’re not alone. But if the idea creeps you out, know that there’s also a completely logical explanation for them too.

More like this
Dyson Is Dropping Futuristic, Air-Purifying Headphones
By Rachel Lapidos
This AI Filter Shows How You’d Look In Different Time Periods
By Alexis Morillo
Here’s How To Find Your Spotify Wrapped
By Emma Lord and Emma Carey
Here’s How To Turn On Instagram Post Notifications
By Megan Grant and Alexis Morillo
Get Even More From Bustle — Sign Up For The Newsletter

This article was originally published on Oct. 22, 2018