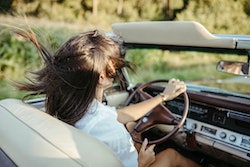 Do you ever seem to see repeating sequences of numbers over and over again, like 222 or 333? Or have you heard that seeing 11:11 on the clock is a lucky sign to make a wish? It definitely feels like a strange coincidence when you see the same series of digits popping up everywhere you turn — but seeing repeated numbers on the clock or elsewhere might actually mean that the universe is trying to tell you something.

"If you see something like a repeating number and ask yourself, 'Is this a sign?' then the answer is always yes," astrologer and numerologist Jasmine Wolfe tells Bustle.

A sequence of repeating numbers that keeps popping up in your life could manifest in a variety of ways in order to get your attention. Maybe you always seem to look at the clock at 2:22. Then, later in the same day, your take-out dinner totals out to $22.22. A few days later you might notice that you're the 222nd person to like an Instagram pic. While you might write these things off as a coincidence, there could be a greater meaning behind the numbers — especially if you find yourself questioning that potential meaning. When you start to consider these numbers may be direct messages from a divine, celestial force, the more you’ll notice them.

“Numbers are the language of the universe, and the universe speaks to us through codes. The more we learn to listen, the more we are empowered to fulfill our destiny and achieve the deep joy we deserve,” Jesse Kalsi, numerologist and author of All About Numbers: Attract Luck, Abundance, and Joy Based on Your Numbers, tells Bustle.

Ready to receive these downloads from the universe? Continue reading for a deep dive on what it means when you see the same numbers and what they’re trying to tell you.

Whether it's 11:11, 222, or 555, repeating sequences of numbers are known as "master numbers" in numerology, and seeing them over and over is a sign to pay attention to your mind, body, and soul. Some spiritualists also refer to them as "angel numbers," which basically means the same thing — except that instead of the universe communicating with us, it's thought to be our guardian angels serving as a guide. Whether you believe they're angels, the universe, or just your higher self calling to you, noticing the numbers is no accident.

One of the most well-known and common repeated number sightings is a series of the number one. Think of the way many people make a wish when they see 11:11 on the clock, for example. Making a wish at 11:11 is a popular superstition because 1111 in numerology is an auspicious pattern — in numerology, the number one represents independence, confidence, and new beginnings. "People usually see 111 or 11:11 most when they are just beginning their spiritual journey," Wolfe says. Noticing 11:11 more frequently could mean you're embarking on a new spiritual path.

There is a unique spiritual meaning behind each number in numerology so you might be receiving a different message depending on the numbers that show up in your life. Listening to these messages allow us to be more reflective in the patterns and problems in our lives, so when you notice them, it’s like a reminder to be alert. "If we're seeing a series of 2's, it's often a reminder that we are in the right place at the right time," Wolfe says. That's because the number two in numerology represents harmony and coexistence, which could indicate that things are in currently in balance. In that case, you’d probably want to reflect on any imbalances in your life.

So, what is the universe trying to tell you, anyway? Every single-digit number's sequence is thought to symbolize something different. "333 is a portal and it means we can expect growth in our lives soon; 444 means you are safe and supported; and 555 usually means something is about to change," Wolfe says. Sometimes these messages are warnings, like you’re putting in too many hours at work or running into an unfriendly ex. Other times, it’s an alert for you to take stock of your life in relation to the number sequence. For example, 444 symbolizes a confirmation that you’re ready to move on from something. So, if this number shows up for you, pay attention to what transformations that you need to make in order to move forward in your life.

In addition to sequential numbers, you may see a series of the same non-sequential numbers over and over again. In this case, consider the meaning of each of the numbers separately and then interpret what they mean together. This could be based on numerology or simply your own life experience. For example, if you see 313, break down the meanings behind both 3 and 1, and plug in the pieces from your life and situations to decode the universe’s message.

“If certain numbers continuously appear in your life, the first thing you should do is check if they’re compatible with you. Compatible numbers help us experience sudden improvements in luck and endow us with a higher sense of intuition,” explains Kalsi. “Consider what you were thinking about before the repetitive number appeared. What emotions were you experiencing and how did seeing these numbers affect your feelings and mood?” says Kalsi.

You can find your compatible numbers by adding up the numbers of your name, which are associated with a certain number between one and eight, a popular technique in numerology called the Chaldean code. If your name adds up to 23, then this number, along with its single digits, will hold a significant meaning in your life. What’s more is each zodiac sign is also ruled by a number, so this zodiac sign is likely to have a major influence on anything from your career to your legacy. You can also find this number using a Chaldean calculator.

If you notice a specific number cropping up more regularly, pay closer attention to these numerological themes and how they're currently manifesting in your life.

Different numbers mean different things in numerology, and it's believed that whatever is trying to get your attention through repeating numbers will keep showing up until you listen. If you're not catching on, you may begin to see the numbers in other places besides a clock — receipts, your car plates, phone numbers, or app notifications could start making numerologically synchronous appearances, too.

"When you're seeing a lot of repeating numbers, more often than not, it's the Universe saying hi," Wolfe says. "A lot of us [worry it] means something bigger or more foreboding, but most of us are still very much waking up our spiritual connections — so seeing 11:11 every day is a simple reminder that we're on the right path." So if you're seeing double numbers, triple numbers, or any repeating digits on a regular basis, there's no need to feel spooked.

Numerology is helpful when it comes to decoding the meaning in the universe's secret messages, but don't ignore your own intuition when it comes to forming an interpretation. In the same way the patterns in life can tell us about which habits work and which don’t, seeing master numbers or angel numbers can give us spiritual insight into what the universe thinks about the cycles that are manifested in our lives. "It's important to remember that these signs are meant for you, so if you have a different relationship with the numbers, trust your own inner knowing more so than what the internet has to say," Wolfe says.

“Also be honest with yourself; repeating numbers could be asking you to stop doing something — maybe you see 222 when you’re about to light a cigarette or end a relationship that is detrimental to you. By introspecting and correctly interpreting the context in which these numbers are being placed in your life, you can understand how they impact your present and future,” explains Kalsi. Numerology is a helpful guide, but ultimately, you can create your own meaning.

While you may be tempted to write off master numbers or angel numbers as a little too out there, it's fun to keep an open mind. Everything is open to interpretation, and the real lesson here — whether you believe or not — is that there is always benefit in trusting your intuition. Because you never know what your inner self might trying to tell you.

This article was originally published on May 8, 2017