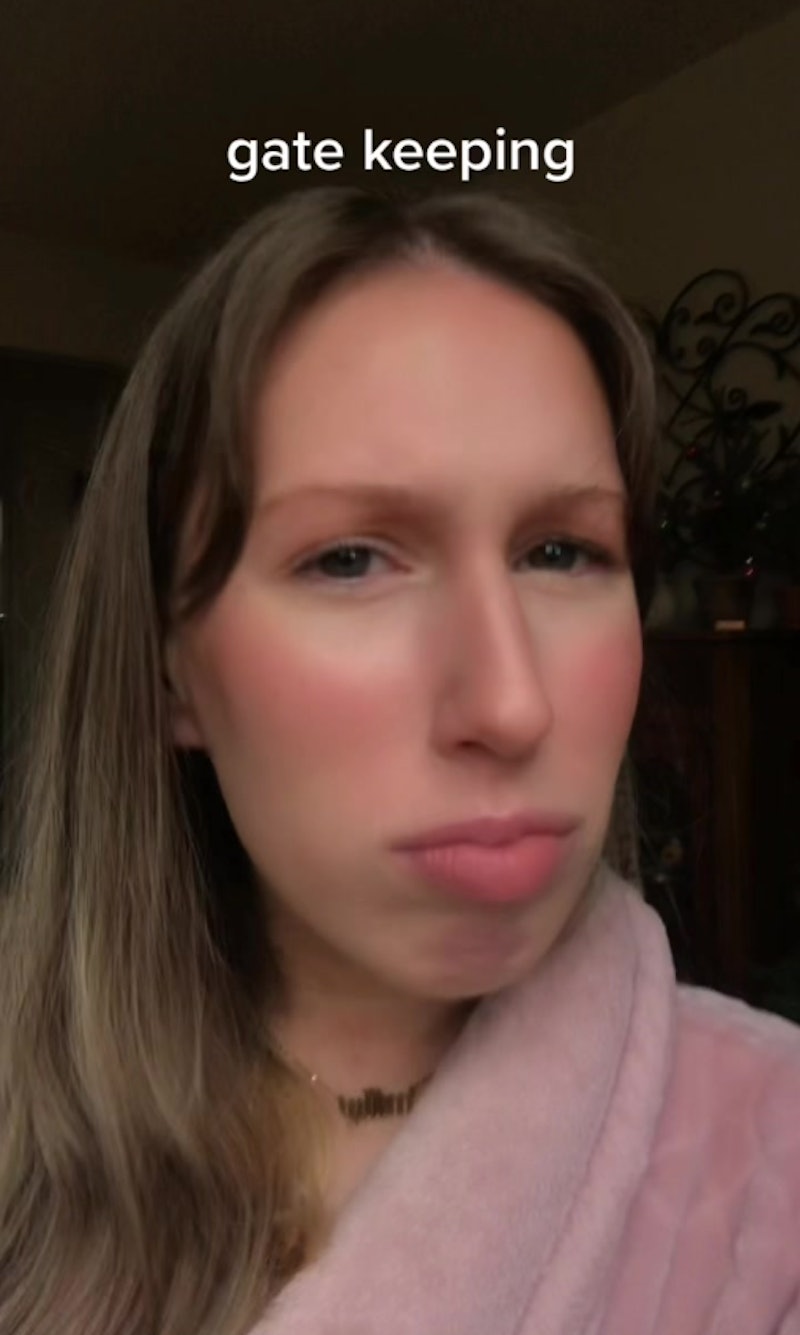 Gatekeep. You may know the textbook definition, but if you’re not on TikTok, you may not know the online discourse. According to Merriam Webster, “gatekeep” is not actually a word. “Gatekeeper,” however, is defined as, “a person who controls access.” In the lexicon of the online, to gatekeep is to withhold information with the intention of keeping something exclusive.

On TikTok, users share links to hidden Amazon holy grails or singles from under the radar indie bands with phrases like, “not trying to gatekeep” or “done gatekeeping this.” The tag #gatekeep has 226.3M views on TikTok, with related tags like “gatekeeping” and “gatekeeper” collecting 154M and 57M views, respectively.

The term is not only used to expand conversation, it’s actually often used to restrict it. Long-time fans of musicians will throw around the word to slam new fans. Style enthusiasts will post their OOTD’s, describing their ‘fits as “thrifted,” “vintage,” or “no tags” to remain exclusive. If you ask a gatekeeper what perfume they're wearing they might respond with, “I don’t remember the name.” Annoying? Sure. Illogical? Not at all.

TikTok’s viral culture has been known to create overnight cult followings around products and artists which then results in hidden gems becoming tokens of status. Take for instance, the Charlotte Tilbury Hollywood Flawless Filter foundation. Previously “gatekept” as the red carpet beauty secret for celebrity makeup artists, the product went viral online over a year ago and can still be find in stores today. The tag #charlottetilburyflawlessfilter has more than 4M views on TikTok, with users sharing dupes and alternatives and praying the product comes back in stock.

For a generation raised on YouTuber’s hauling everything from their favorite shampoo to their grocery staples, gatekeeping may be an effort to keep something close to the chest and consistently available.

How Does TikTok Use The Term “Gatekeep?”

On TikTok, “gatekeep” is often seen in the comments section of product reviews and hauls. One user, @abbythebadassmom, went viral with her series testing a variety of under eye concealers and when she found the winning product in March, her comments section was flooded with, “Thank you for not gatekeeping,” and, “NOOOO YOU SPOILED THE SECRET 😂😂😂 I was planning to gatekeep it lol.”

Viral TikToker, @sabrina.cinoman.brier, gained buzz for her video satirizing “the friend who gatekeeps everything.” Her pajama set was the last one in store, she doesn’t know her apartment broker, the show she was watching got canceled – don’t even ask.

Another user, @mr.aphrica, went viral for his video poking fun at people who “gatekeep unnecessary things,” like where they ate dinner. “You’re not even hungry bro,” he says in response to “where’d you get those wings?”

The word also picked up traction through a viral phrase on the app, “gaslight, gatekeep, girlboss,” a new take on the “live, laugh, love” of yesteryear.

The “What Is Gatekeeping?” Debate On TikTok

Like any viral phrase or idea on the internet, there is a sweet spot, a threshold of time where every iteration of the word is funny, relatable, and shareable. Once that threshold is passed and there are hundreds of thousands of people in the conversation, the ultra online scatter. Remember “cheugy?” The phrase was rooted in a genuinely humorous observation, but found itself on mugs, t-shirts, and Facebook shares at the end of its internet life span.

Gatekeeping has followed a similar path, with users starting new conversations about the real meaning of gatekeeping, and all the ways the internet misuses and overuses it.

In the beauty and food spaces, the line between gatekeeping and acknowledging cultural appropriation can become blurred. One user, @nattyissues, brought up this point saying, “when culture is involved, it is not gatekeeping. It’s literally just preservation of culture.” She lists examples like when Indian people call out the price gauging of cultural staples like turmeric or when Black folks call out others for wearing hair styles meant to be used as protective styles for textured hair.

On a small scale, the case for gatekeeping is simple (and sometimes petty online). Want to keep your local dive bar divey or your favorite frozen dinner in stock? Gatekeep, (gaslight, girlboss.) On a larger scale, if something feels inaccessible to you on a cultural level, perhaps the issue has nothing to do with “gatekeeping” at all.