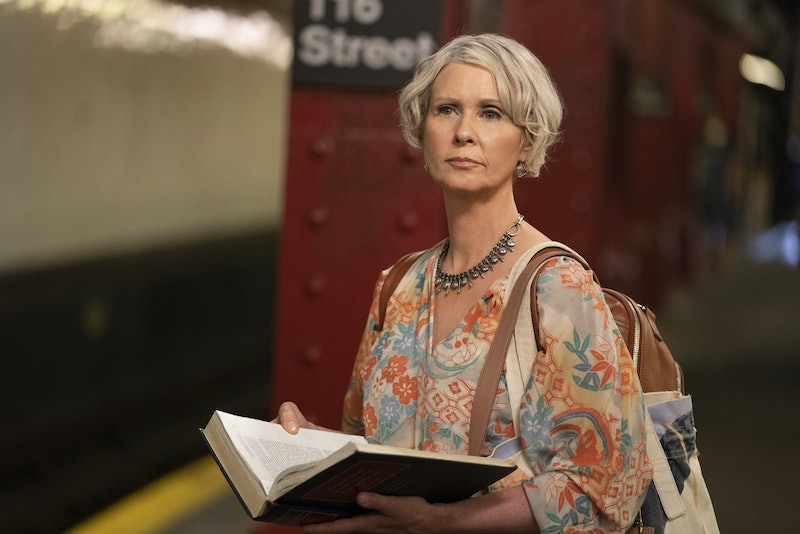 Your mom just called the Sex and the City reboot “woke,” and just like that (ahem), you feel the need to school her. She’s not wrong — Miranda Hobbes’ storyline in particular has been described as “woke,” as well as “performative” and “strange” — but she’s not exactly right.

You’ve probably seen or heard the word “woke” used as an adjective — as in, “stay woke.” But what does woke mean, specifically, when you use it to describe a state of being or thinking?

According to Kelly Elizabeth Wright, an experimental sociolinguist and Ph.D. candidate at the University of Michigan, language — and the definition of woke — is ever changing. “How we interpret the meanings of words naturally change over time. Woke is simply a word that has undergone a rapid pejorative shift.” Woke originally described a state of awareness and sensitivity to social injustices, but has become a sort of catchall for liberal sensibilities. To wit: In December 2021, one Floridian made headlines for putting anti-woke flyers on cars with New York license plates parked on a Palm Beach street. Per The Palm Beach Post, the flyers read, “If you are one of those woke people — leave Florida, you will be happier elsewhere, as will we.”

Where Does The Word “Woke” Come From?

Unlike other four-letter acronyms associated with the social justice movement, the original term woke doesn’t stand for anything: it is literally the past participle of “wake,” as in “to wake up,” and that underpins its basic meaning. Someone who’s woke has “woken up” to issues of social injustice. The Oxford English Dictionary officially added this definition in June 2017, citing the Black Lives Matter movement as well as lyrics of Erykah Badu’s 2008 song “Master Teacher” as catalysts for the phrase’s popularity over the past decade: the song’s refrain repeats the phrase “I stay woke.” By 2018, Urban Dictionary had upvoted a different definition: “The act of being very pretentious about how much you care about a social issue.”

“The original meaning of adjectival woke (and earlier woke up) was simply ‘awake’, but by the mid-20th century, woke had been extended figuratively to refer to being ‘aware’ or ‘well informed’ in a political or cultural sense,” the OED wrote in an announcement about adding this sense of “woke” to the dictionary. “In the past decade, that meaning has been catapulted into mainstream use with a particular nuance of ‘alert to racial or social discrimination and injustice’.”

Importantly, this latter meaning comes out of African-American Vernacular English (AAVE), writes the Merriam-Webster dictionary. “Stay woke became a watch word in parts of the Black community for those who were self-aware, questioning the dominant paradigm and striving for something better.” Following its use in the Black Lives Matter movement of the mid-2010s, “Instead of just being a word that signaled awareness of injustice or racial tension, it became a word of action. Activists were woke and called on others to stay woke.”

To use "woke" accurately in a sentence, you'd be talking about someone who thinks for themselves, who sees the ways in which racism, sexism and classism affect your daily life. #StayWoke often accompanies social media posts about police brutality, systematic racism and the industrial prison complex. Someone who understands how to be woke thinks critically, with intersectionality at the heart of their work.

How Has The Meaning Of “Woke” Changed?

As with other examples of woke slang, though, its meaning has been twisted over the years. Twitter urges you to #StayWoke about everything from conspiracy theories to dating red flags. You can take jokey quizzes to test how woke you are; Fox News commentators bemoan “wokeness” in the same way they deride being politically correct. In 2018, political correspondent Sam Sanders argued to stop using “woke” in an op-ed for NPR: “Words that begin with a very specific meaning, used by a very specific group of people, over time become shorthand for our politics, and eventually move from shorthand to linguistic weapon. Or in the case of woke, a linguistic eye-roll.” You might also see it as a hashtag on both serious and joking conspiracy theory videos, making these feeds somewhat tricky to explore.

Per Wright, the word is free for all to use, without concerns of co-opting or diluting its meaning with overuse. That said, she “advises caution” before picking the word to describe yourself or others ideologically. “With the rise of terms like ‘woke mob’ and ‘anti-woke’, we want to be cautious of aligning too much of ourselves with the highly [distorted] concepts of known words.” As people’s relationship with the word remains in flux, it will be important to periodically check in with how it’s being used to make sure you’re actually saying what you mean to say.

Kelly Elizabeth Wright, an experimental sociolinguist and Ph.D. candidate at the University of Michigan

More like this
Behind The Hilarity Of The "POV: You Walk Into My Room" TikTok Trend
By Lexi Inks
Here's How To Get Your iPhone To Update Automatically Forever
By Emma Carey
Why TikTok Is Obsessed With Caesar Salads Right Now
By Alexis Morillo
This TikTok Song About An Unrequited Romance Has FYPs In Shambles
By Emma Carey
Get Even More From Bustle — Sign Up For The Newsletter