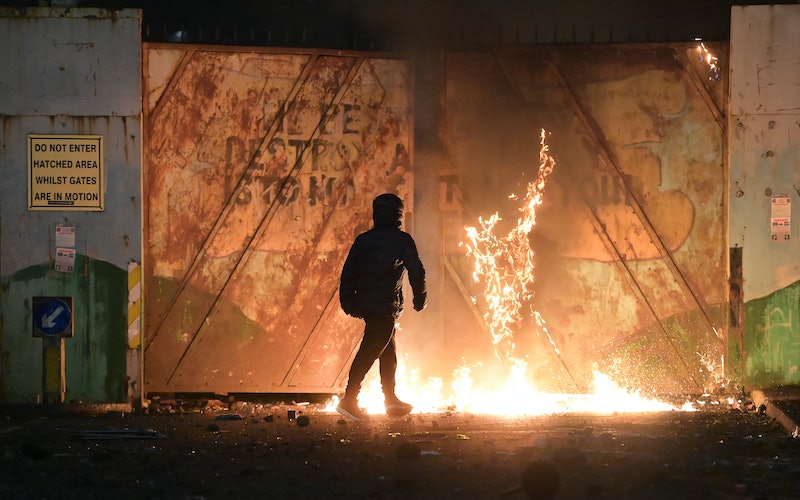 By now you’ve probably seen the burning bus on the streets of Belfast, or watched news footage of people throwing stones and police gathered behind riot shields. Northern Ireland is rarely in the news for anything other than disruption and violence, and the coverage of the recent riots – referred to by the FT as “Belfast’s worst spate of sectarian violence in years” – is no different. This time, the unrest is widely being blamed on Brexit, but as always when it comes to Northern Ireland, the truth is much more complicated.

I grew up in Derry (yes, from Derry Girls) and although it’s ostensibly the same country as all the places where I’ve lived as an adult, sometimes it feels like a different planet. Even my most socially aware and engaged friends in London don’t really know a lot about the history of Northern Ireland, and I can’t blame them; the Troubles are often seen as ancient history, long passed and best forgotten. In actuality, the Good Friday Agreement was only signed in 1998, and the official ceasefire was just one step in a long and painful peace process – one that’s still ongoing today.

These riots aren’t happening in a vacuum; Northern Ireland is still very much a post-conflict society, and as someone who grew up there I want people to look past the headlines to try to understand why.

Why Northern Ireland even exists

As countries go, NI is a relatively new one; it’s only existed since 1921. After centuries of British Rule, the Republic of Ireland won the war for independence; however, partition meant that the six counties of Northern Ireland remained in the UK. Two disparate communities emerged: a majority group of unionists, primarily Protestants who consider themselves British; and a minority group of nationalists, primarily Catholics who consider themselves Irish. The latter facing discrimination and oppression. During the Troubles, there was widespread violence from paramilitary groups and the occupying British army, creating a divided society that remains today.

Sectarianism is still an issue

Thanks to changing attitudes and community efforts, lots of people live in peace with their neighbours, but the religious divide (and the resulting animosity) remains a significant issue. There’s a lack of integration in education, with 93% of students attending a school separated by religion, according to Ulster University research. Many residential estates are effectively still segregated, with political allegiances declared by flags flying from windows, or Union Jack-painted kerbs. Recent reports suggest that the majority of the unrest is coming from unionist areas, with much of the violence in Belfast taking place around the Peace Walls that separate Catholic and Protestant neighbourhoods.

In 2019, almost one in five people in Northern Ireland were in poverty, including 18% of all working age adults. Last month Save The Children discovered that a quarter of Northern Ireland’s children are living in poverty, with 35% of them being raised in working families; here, a job is no guarantee of economic stability. Though there’s also no guarantee of a job, with redundancies reaching a 20 year high this February and fewer than 70% of working age adults employed.

Living in a post-conflict society has also created a mental health crisis that Northern Ireland is ill-equipped to deal with. In 2012, the Poverty and Social Exclusion study revealed that more than half the adult population had witnessed violence like bombings, rioting, or gunfire during the Troubles, and 35% knew someone who had been killed. Drug and alcohol abuse is classed as a serious public health concern, and antidepressants are prescribed at one of the highest rates in the world.

Police brutality is nothing new here

From the killing of George Floyd last summer to the recent Sarah Everard vigil and Kill The Bill protests, the media is paying more attention than ever to police brutality. But in Northern Ireland mistrust of the police is widespread, especially in Catholic communities, and it’s little wonder after the state-sanctioned violence of the Troubles and beyond.

Northern Ireland is the only place in the UK where the police can use water cannons without special authorisation, and plastic bullets (which were actually invented by the Ministry of Defence to use in Northern Ireland, and which killed 17 people during the Troubles) are still in frequent use. Both these weapons have been deployed in the recent rioting in a move that human rights organisation Amnesty International has called “extremely alarming”, especially considering that many of the rioters are children. Though of course police brutality (sadly) exists everywhere, it’s hard to imagine this kind of organised excessive force being used on mainland UK without it leading to a public outcry.

We were also occupied by the British army

The first soldiers arrived in 1969 and the operation didn’t officially end until 2007. For context, that’s the same year that Rihanna released Umbrella. It’s the longest deployment in the force’s history, and during this time the army committed atrocities like Bloody Sunday, where soldiers opened fire on a Catholic civil rights march in Derry, killing fourteen unarmed people. No one has ever been prosecuted for these killings.

We have our own parliament – sometimes

The Northern Ireland Assembly is a devolved government, which means it can create laws in the areas that aren’t reserved for the UK parliament. Just like education and housing, political parties tend to fall on either side of the religious divide and so a power-sharing system was designed to try and ensure everyone’s voice was heard. However, allegations of corruption in 2017 meant that this arrangement collapsed and the assembly was suspended – for three whole years. Though it was reinstated in January 2020, the time spent without a devolved government has led to an unstable political situation in NI and an understandable lack of trust in politicians.

Brexit has only brought things to the surface

It’s tempting to blame the current unrest and rioting on Brexit, but that’s only the spark that set off a bonfire built by decades of division and deprivation. The uncertainty surrounding the Irish border is just the latest issue that makes it apparent that Northern Ireland is an afterthought to the British government.

Here’s where I want to tell you how to help; send you to donate to a GoFundMe or sign a petition. But the truth is, nothing that simple could resolve the century of divisions and conflict that has made Northern Ireland what it is. There needs to be real, systematic change — not only in Northern Ireland, but in the way the rest of the UK views Northern Ireland. And this can only come from education and understanding. So next time you see a news story about Northern Ireland, please don’t change the channel; watch, and understand that there’s so much more to this story than a bus on fire.

More like this
Prince William Condemns “Unacceptable” Comments Made To A Black Guest At Buckingham Palace
By Shahed Ezaydi
MOBO Awards Found Kanya King On The Woman Whose Grit & Determination Spur Her On
By Kanya King
Everything You Need To Know About Dabloons, TikTok’s New Currency
By Catharina Cheung
Heinz Just Relaunched A Bean-Tastic '90s Fave
By Sam Ramsden
Get The Very Best Of Bustle/UK