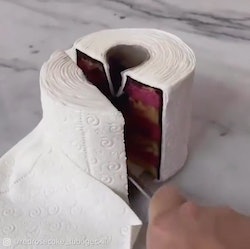 We've seen some pretty weird internet trends circulate in the midst of the coronavirus pandemic. There was the bizarre #PillowChallenge where people were tying their pillows to their bodies with a belt like a dress. Then there were those ridiculous but hilarious Gossip Girl memes that demonstrated that people were very bored in quarantine. And now, social media is swarming with new "made of cake" memes based on a running joke where people are convinced they're... made of cake. Yes, we have collectively lost it.

How Did The "Made Of Cake" Meme Start

We can thank Tasty, the world's largest food network, for the internet's newfound belief that everything is made of cake. On July 8, Tasty released a video titled "These Are All Cakes," where they showed a knife cutting into objects that seemed to be what they looked like, but ended up actually being cake. From toilet paper and potted plants to Crocs and even pizza, each super-realistic-looking item was shown to be a cake in disguise.

But rather than simply applaud the cake makers' skill, the internet took an interesting turn. It began with a few people in the comments jokingly making videos of them cutting into their own household items and Tweeting things like "It's not working for me." And from there, it took a hilariously wild turn.

Memes popped up all over social media showing people freaking out about whether everything was a cake. And from there, the memes began.

The Best "Made Of Cake" Memes

While recognizing how convoluted the whole "made of cake" memes were, I also scrolled through as many as possible and laughed at each and every one. I'm not sure if it was the memes themselves or the realization that all of the internet was having a communal breakdown that really did it for me, but I enjoyed every single meme. Here are some of my favorites:

I wonder what I'd think about this Tweet if I didn't know about the meme.

Is it really a meme without an adorable but threatening Kirby?

Even Air Bud is contemplating his existence.

Maybe there should be a warning label with these memes.

If NASA's in on the meme, you know it's a big deal.

Even our favorite Netflix series about a murderous stalker took part in the cake meme fun.

There were also plenty of celebrities who took part in the trend. And when celebrities are this bored, you know it's bad.

Are Diplo's songs just cakes too???

Well, that took a surprising turn.

If makeup artists are picking up on the trend, it's only getting started.

And though she didn't make one of her own, Chrissy Teigen did Tweet to show her appreciation for the trend:

How To Make Your Own "Made Of Cake" Meme

There's really no rules when it comes to this meme because it's based on something so utterly ridiculous. Whether you post your own picture of you pretending to cut into something or reuse one of the memes already in existence, you can take part in the very confusing fun.

So long as you find a way to express that you're questioning your own existence, as well as the existence of everyone around you in a way that references pop culture... you've joined the club.

More like this
Ashamed Of Your Screen Time Stats? Here's How To Change That
By Alexis Morillo
The Internet Is Obsessed With These LEGO Flowers — Here’s Where To Buy Them
By Alexis Morillo
11 Super Bowl Instagram Captions To Use On Game Day — Even If You Don’t Like Sports
By Alexis Morillo
Everything You Need To Know About The Samsung Galaxy S23 Ultra’s New Camera
By Alexis Morillo
Get Even More From Bustle — Sign Up For The Newsletter
From hair trends to relationship advice, our daily newsletter has everything you need to sound like a person who’s on TikTok, even if you aren’t.