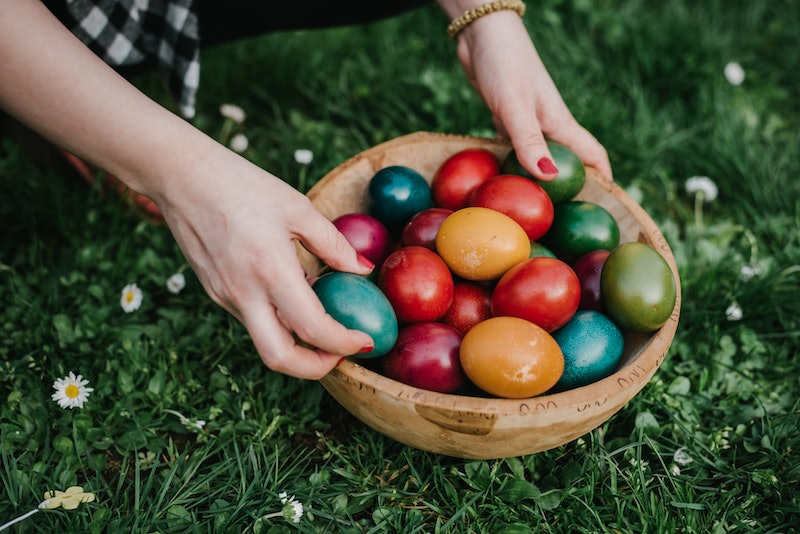 Even if you don't celebrate Easter, chances are you're familiar with its modern-day traditions: Chocolate bunnies, loudly pointing out its pagan origins, microwaving Peeps to watch them puff up, and (of course) the ubiquitous egg hunt. Scrabbling through the grass for brightly colored hard boiled eggs is one of the most recognizable Easter traditions out there, but why do we have Easter egg hunts? It probably won't come as a surprise to hear that like many of the holiday's best-known customs, the egg hunt dates back thousands of years.

Although most of us know it as a Christian holiday, Easter is believed to have its roots in paganism — hence the existence of an Easter bunny despite no mention of an egg-laying hare in the Bible. The word "Easter" is thought to come from the Teutonic goddess of springtime Eostre, who was commonly associated with rabbits thanks to their connection with fertility; early Germanic cultures believed that Eostre and her egg-laying rabbits heralded the beginning of spring. When Christianity made its way into Northern Europe in the 15th century, the association stuck around even as paganism was overtaken by monotheism: The egg, a symbol of life and rebirth for thousands of years, came to represent the resurrection of Jesus Christ — in fact, Easter eggs were traditionally dyed red to symbolize his blood. Today, Easter is a celebration of his resurrection as well as the end of Lent, a 40-day period in which many Christians give up certain vices or habits they find pleasurable.

So what does all of this have to do with the Easter egg hunt? Not much, actually. As we just discussed, Easter eggs are largely a pagan tradition, and the egg hunt is no different. Although its roots aren't totally clear, it's widely believed that egg hunts date back to the 1700s, when the Pennsylvania Dutch believed in an egg-laying hare called Oschter Haws (or Osterhase). Because this precursor to the Easter Bunny laid eggs in the grass, children were encouraged to build nests for it to lay in — and to search for the eggs it left behind. Oschter Haws eventually became the Easter Bunny, who isn't known for its egg-laying capabilities, but the tradition of creating nests — or in the modern day, baskets — and searching for his presents stuck around.

So there you have it! As the Internet is so fond of reminding everyone, Easter has some definitively non-Christian roots. Also, the Easter bunny used to be even weirder. Now go enjoy your rabbit-shaped hunk of chocolate and microwave some Peeps.

More like this
24 Funny Valentine’s Day Captions To Use No Matter Your Relationship Status
By Jessica Booth
16 Valentine’s Day Quotes About Chocolate That Will Make You Hungry
By Emma Cueto
25 Galentine's Day Games To Play On Zoom With Your Long-Distance Besties
By Mia Mercado
21 Galentine’s Day Memes To Celebrate Your Best Friends
By Meghan Bassett and Mia Mercado
Get Even More From Bustle — Sign Up For The Newsletter
From hair trends to relationship advice, our daily newsletter has everything you need to sound like a person who’s on TikTok, even if you aren’t.

This article was originally published on March 27, 2016