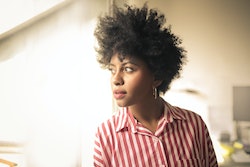 This summer has been anything but a vacation, astrologically speaking. We've just come off three consecutive lunations that also doubled as chaotic and change-making eclipses — and many of us are still recovering from the intensity of the full moon lunar eclipse on July 4. Up next on the lunar front we've got the July 2020 new moon in Cancer, which rises on Monday, July 20 and is officially not an eclipse (phew!). However, this new moon isn't likely to be much of a reprieve from the intensity of eclipse season 2020 — especially for the handful of zodiac signs most affected by the July 2020 new moon.

Most of the new moon friction can be blamed on the restrictive and stern planet Saturn, which is forming a tough planetary aspect with both the sun and moon during the height of the luminary. "The sun opposes Saturn on this new moon, which can add to the feelings of being weighted down with responsibilities," astrologer Leslie Hale of Keen.com tells Bustle. "Conflicts between work and family responsibilities can arise, and this [could] be a significant news day."

Cancer is a cardinal water sign, meaning its energy leads with emotion and empathy, and it's particularly associated with home, family, and other intimate matters. With both the sun and the new moon here, we'll have the desire to focus on more sensitive and private matters, keeping feelings close to home and examining our personal foundations. But with Saturn occupying Capricorn, which is an ambitious and work-focused energy, we'll likely be unable to initiate these emotional endeavors without being distracted by the weight of our worldly responsibilities. Our desire to begin new projects and build toward new goals will be muddled by Saturn's energy, which is throwing hurdles in the road that will force us to slow down.

The sun, moon, and Saturn will be igniting tensions across the cardinal zodiac signs' planes during the new moon. And if you happen to be one of zodiac signs most affected by July's new moon, you'll want to take a deep breath and try to keep your cool — because this luminary has the potential to ruffle all your feathers.

Under the new moon, you're feeling a frustrating pull between the emotional and the tangible, Aries — and that's no fun for an impatient fire sign like yourself. While you're being called to focus your energy on your home and family life, healing foundational wounds and making your private space a more comfortable oasis, you feel unable to gain any traction due to high pressure from work. Capitalize on your desire to get deep with yourself and create a safe emotional space to sort through your issues. You'll have to strike a balance, as your responsibilities can't seem to wait. Schedule some time this weekend to connect with family, write in your journal, or clean your home to make it cozier so that you don't lose momentum. You'll still have plenty of time to catch up with your professional life.

Cancer season has been a nonstop roller coaster for you, Cancer baby. Between Mercury retrograde, two eclipses, and now a second new moon in your sign, you've hardly been able to come up to shore and catch your breath. Under this luminary, you're feeling particularly frustrated over not having enough time for yourself. After all the astrological intensity you've had to fare, it's time for a day off to prioritize your own needs. Unfortunately, this weekend may not pan out that way. Relationship drama is making it impossible to focus on yourself — but the conflict and discord isn't for nothing. You're learning valuable lessons about how to function in relationships, so give partnerships the attention they require during the new moon, but be sure to honor yourself by maintaining boundaries and communicating your needs.

You've been a busy bee at work, Libra, and you'll likely feel a spark of inspiration and initiative when it comes to taking on new projects and tackling goals. However, the energy of the new moon is fully scrambling your flow. While your heart wants to focus on your professional dreams, you're going to feel conflicted when it comes to the responsibilities in your home life. Some sacrifice will be required — you'll need to make time to deal with the emotional issues that arise. Otherwise, they'll continue to serve as a distraction from the things you want to focus your energy toward. Remember that this is only temporary. Despite the fact that you're bursting with ideas, take small and practical steps toward your goals instead of gravity-defying leaps. Doing the small stuff will allow you time to deal with other personal matters — and it'll still count as progress once this luminary is over.

If you want to heal your relationships, Capricorn, you're going to have to heal yourself — and under the upcoming new moon, you'll see this with crystal clarity. Handling your relationships with integrity as well as building long-lasting bonds with your partner and other close confidants is important to you. While you'll feel more motivated than ever to pour yourself into these partnerships, you're going to find that you keep running into the same issues, and the core of those issues are within you. Be willing to own up to your own emotional baggage and do the shadow work that's necessary to grow in your relationships and tough stuff arises. Shortcuts are tempting, but you know better than anyone that they're never as reliable as taking the longer road that guarantees success.

More like this
These 3 Signs Are The Master Chefs Of The Zodiac
By Kristine Fellizar
These 4 Zodiac Signs Make The Best Bridesmaids
By Nina Kahn
These 3 Zodiac Signs Could Write A Bestselling Novel
By Brittany Beringer
Here’s Your Horoscope For Unconventional Aquarius Season
By Brittany Beringer
Get Even More From Bustle — Sign Up For The Newsletter
From hair trends to relationship advice, our daily newsletter has everything you need to sound like a person who’s on TikTok, even if you aren’t.